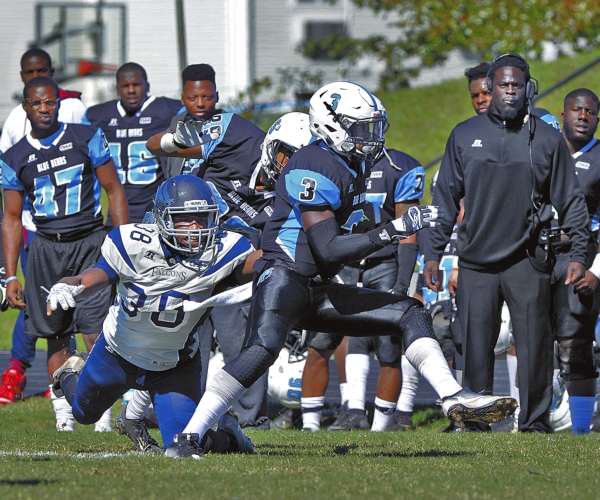 SALISBURY — Of all the things that have made this a lousy season for Livingstone’s football team, Sunday’s double-overtime loss to St. Augustine’s may top the list.

The Blue Bears bungled an extra-point attempt on their final possession and fell, 38-37, at sun-splashed Alumni Stadium.

“We’re still making way too many mistakes,” dejected coach Daryl Williams said after Livingstone (1-5, 0-3 CIAA) lost its fourth straight game. “We beat ourselves again. They have good players, but we had blown opportunities and obvious mistakes.”

None was more glaring than freshman Tyler Keene’s botched PAT after Livingstone had taken a 37-31 lead to open the second overtime series. The kick appeared to be blocked, but Williams said it simply never elevated.

“It was just a low kick,” said the coach, who walked the sideline despite undergoing back surgery last Thursday night. “It came out flat, didn’t have any height on it at all.”

While the Blue Bears may have drowned themselves, St. Augustine helped fill the pool. The Falcons (2-4, 2-1) capitalized on Livingstone’s miscue by scoring on its final play — a 10-yard touchdown run by quarterback D.J. Johnson — and converting the game-winning extra point.

“I wasn’t smiling,” said winning coach Tim Chavous. “We were just thinking about getting a win and getting out of here. It’s been a long, long week because of the hurricane and having to play on Sunday. A lot of my guys have family in Florida and South Carolina. They were pretty distraught.”

Camouflaged in the chaos was an encouraging performance by Livingstone quarterback Xavier Longerbeam. The sophomore completed 17 of 24 passes for 229 yards and fired touchdowns to four different receivers. But he was also sacked twice, lost a fumble deep in LC territory and threw a knuckleball interception late in the first half.

“I’ve got to have more ball security,” Longerbeam said. “I had two turnovers myself — on a day when our backs and the (offensive) line did a great job. I’ve got to be more disciplined, and be louder so we don’t have motion penalties. That comes with playing quarterback.”

Livingstone jumped to a 7-0 lead in the opening minutes when Longerbeam hit Jarius Richardson with a screen pass in the right flat and the speedy running back turned it into a season-best, 79-yard touchdown play.

Two possessions later, with a chance to bolster the lead, Longerbeam was stopped for no gain on a third-and-inches quarterback sneak from the St. Aug’s 7-yard line. The scoring opportunity fizzled when Livingstone was flagged for a false start and Keene misfired on a 29-yard field goal try.

St. Augustine scored a pair of second-quarter touchdowns before the Blue Bears pulled even on a 13-yard TD catch by Andrew Gamble with 3:34 remaining in the half. LC trailed 28-20 in the fourth quarter until Longerbeam rolled out to his right and spotted Latrell Flowers open for a 6-yard TD. When Flowers rumbled into the end zone for a two-point conversion, the score was tied for the third time.

“We had them all along,” LC linebacker DeMarcus Nolan boasted after registering 12 tackles and his second sack of the year. “We just had to keep playing. A lot of things we did gave them confidence. We kept them alive with our mistakes.”

Nolan and his mates nearly forced overtime with a stroke of good fortune. St. Aug’s had a 16-play drive that consumed nine minutes and 31 seconds in the fourth quarter — but came up empty when Sean Smith’s 30-yard field goal attempt sailed wide right with six seconds on the clock.

“I don’t think we should have even been in overtime,” Chavous said. “But we found a way. It’s a long season with a long way to go.”

The teams traded field goals in the first overtime period before the Falcons prevailed by the narrowest of margins in the second OT.

“I didn’t see any of this coming,” Williams said afterward. “We’re still going through growing pains. We’re 1-5 and it is what it is.”