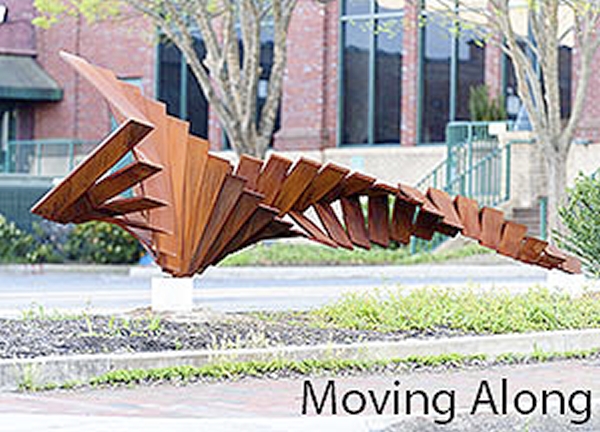 Submitted photo Robert Winkler, a sculptor from Asheville, won Best in Show in the 2016 Salisbury Sculpture Show with his sculpture titled "Moving Along." Sculptures will continue to be displayed until January.

This was the eighth year the Salisbury Public Art Committee has hosted the nine-month sculpture show, with 18 pieces enlivening the downtown and three college campuses.

The show was recently honored with two coveted awards — the Centralina Council of Governments 2016 Improving Quality of Life Award and the U.S. Council of Mayors 2016 City Livability Award.

Winkler’s winning piece, “Moving Along,” has been on display in Salisbury since April 1, and will remain at its temporary location in the Visitors’ Center parking lot in the 100 block of North Lee Street until early January 2017.

The piece reflects the sculptor’s creative style based on mathematics, movement and repetition. Winkler’s artist’s statement describes his objective to manipulate volume, mass and balance to create a sense of movement. Through precision geometry, he creates animated forms that engage the viewer with the power and illusion of movement.

Winkler has exhibited several times in Salisbury, winning first place in the inaugural 2009 exhibit with his large wood piece “Look Homeward Angles,” and again in 2014 for “Salisbury Foursome” at Interstate 85, Exit 76.

“Foursome” was eventually purchased by the Salisbury-Rowan County Convention and Visitors Bureau to be part of the city’s permanent collection.

Winkler’s work also may be seen in permanent public art collections around the southeast, including in Durham, Charlotte and Charleston, S.C.

Bennett, a former photojournalist with an art history degree, said he loved how “Moving Along” achieved the sense of so much motion by repeating the same geometric shapes in different ways.

At once it could resemble the diminishing action of a bouncing ball, and then a tornado. To Bennett, the repetitive shapes also represent the motion of time – with the rusting metal as an ideal communicator of passing time.

The second place award went to Hannah Jubran of Grimesland, N.C., for “Blue Planet,” which is on display at the corner of North Fulton and West Innes streets.

An art professor at East Carolina University, Jubran is also a frequent exhibitor and past award winner in the Salisbury Sculpture Show.

Bennett appreciated Jubran’s kinetic sculpture for its successful portrayal of the solar system motif. The small, somewhat delicate blue sphere in juxtaposition with the much sturdier base makes it more subject to the “winds of its surroundings.”

Winning third place is Richard Pitt’s “Candle,” which seemingly lights the way into narrow Hogan’s Alley in the 100 block of North Main Street. This is the second year the New Albany, Pa., sculptor has exhibited in Salisbury.

Bennett was impressed with how well the piece communicated the motion of a flame, with ribbons of metal wrapping air space in a way that alternates between being there, and then not there. The piece activates and transforms the space, inviting people to use the alley.

The show will remain in place until January 2017. Sculpture show brochures are available at the Visitors’ Center, City Hall, Rowan Library and many downtown restaurants and art galleries. The Public Art Committee looks forward to the 2017 show, which is scheduled for installation in late March.