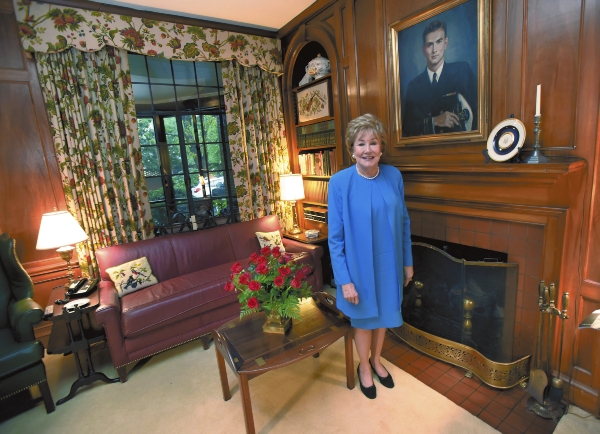 Elizabeth Dole met with many of the visitors in the den during the Elizabeth Hanford Dole home during the October Tour. photo by Wayne Hinshaw, for the Salisbury Post

SALISBURY — Steady rain saturated Saturday’s OctoberTour, but didn’t prevent people from piling into the Hanford Dole house for its first year participating in the event.

The 2016 OctoberTour includes 10 sites from Salisbury and China Grove. This year’s headliner, however, is the family home of former U.S. Sen. Elizabeth Dole. It was built in 1937 by John Van Hanford and Mary Ella Cathey Hanford. Dole and her brother — the late John Van Hanford Jr. — grew up in the house. Dole has also lived in the house.

The house sits at 712 South Fulton Street. It’s one of the few Tudor Revival style houses in Salisbury.

Salisbury is known for its historic preservation, Dole said. The annual OctoberTour event helps bring people’s attention to the importance of preserving historic houses, she said.

“It’s such an important part of our culture to preserve history and this event really enhances that to be able to see the homes and go back in time and learn about historic preservation,” she said.

Dole’s home was filed with pictures and various memorabilia from her childhood and adult years — from childhood portraits to a photo with First Lady Michelle Obama and Second Lady Dr. Jill Biden. There’s another photo in the house of Dole with Princess Diana.

Despite the rain, people were lined up before 10 a.m. to catch a glimpse of the Hanford Dole house. A total of 50 people entered the house in the first hour, said Ashley and Bays Shoaf, who were helping with OctoberTour.

Once inside, tour participants handed off their soaked umbrellas to the self-proclaimed “umbrella brigade,” which consisted of volunteers Carol Sayers and Kaye Brown Hirst. Umbrellas would be carried to the back of the house for tour participants to pick up later. Meanwhile, the interior of the Hanford Dole house offered a step back in time and a brief respite from the rain.

In the first room tour participants enter — the living room — bits of interesting memorabilia include a painted portrait of Dole and a hardhat from her days as Transportation Secretary.

Next, was the downstairs master suite, once a garage. In the room, tour participants learned about code names that the secret service used for Dole and her husband Bob — ramrod and rainbow.

One tour participant then commented: “I wish she were running for president right now.”

Dole’s history of public service was reflected in various rooms throughout the house, but one of the upstairs bedrooms was specifically dedicated to the Dole family’s time in the political sphere. It included campaign memorabilia from a U.S. Senate bid.

In one room, there was a key to the city that the City of Salisbury gave the Dole family in 1996.

In a break between tour participants, Jayne Helms, a volunteer during OctoberTour, recalled working on one of Dole’s Senate campaigns.

“It was one of the most fun times I’ve had,” Helms said. “Carl Rove would call and I’d think ‘wow, I can’t believe it.'”

Several of the tour participants who spoke to the Salisbury Post said the Hanford Dole house was the highlight of the event because of it being on the tour for the first time. That group included Brenda Bledsoe, who went on the tour with her daughter and her friend Christine Reid.

For her part, Reid said she like OctoberTour because she has an older house herself.

It was Bledsoe’s first year on the tour and Reid’s second.

“This is our thing,” Stevens said. “We love OctoberTour.”

The pair said they enjoy the event because people are willing to open their houses to the public. They were among the dozens who braved the weather for the annual event.

OctoberTour continues today from noon to 5:30 p.m. Stevens and Rodenhuis predicted that today’s events would be significantly busier. Weather is projected to be sunny and clear.

The full list of houses on the OctoberTour includes:

The house is believed to have been built in 1906 by George and Lina Fink. After years of vacancy left it in disrepair, Doris Ludwick purchased the home in 1973. Ludwick renovated the house.

Built by W.L. Kluttz and J.A. Rendleman in 1900, the house has been home for a number of people.

Built in 1903, the building’s main walls are 22 inches thick. The bricks were made from Grant’s creek. It has twice been damaged by fires.

The Roller Mill is on the National Register of Historic Places. It was renovated and restored by the Historical Society of South Rowan

The House was built in 1897 by Dr. Robert Lamar Ramsay, a local dentist.

Built in 1905, for Colonel and Mrs. Franklin Fletcher Smith, the house has been extensively renovated since its current owners purchased the property in 2013.

The House was built in 1820. It’s listed on the National Register of Historic Places. It was originally constructed as classrooms for the Salisbury Female Academy.

The house was built in 1815 by Jacob Stirewalt. It was purchased by Maxwell Chambers in 1847 and used as a manse by the First Presbyterian Church until 1913. It was restored by Rowan Museum Inc.