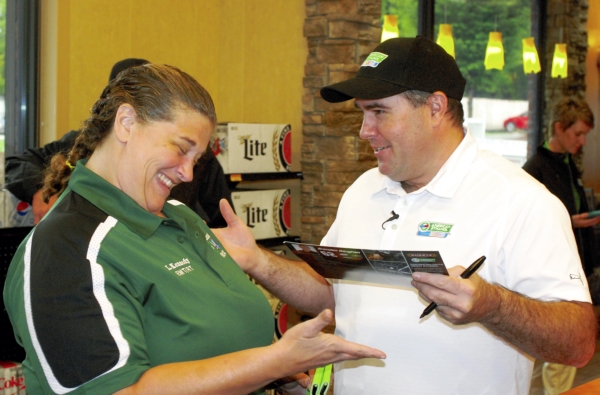 Dennis Davidson/Salisbury Post ... Linda Kennedy, of the Rowan County Rescue Squad, jokes with NASCAR Xfinity Series driver Brendan Gaughan during his appearance on Friday at Sheetz in Salisbury. Gaughan was signing autographs and talking with fans in preparation for this weekend's Charlotte race. October 7, 2016.

Gaughan starts 11th in today’s Xfinity Drive For The Cure 300 at Charlotte Motor Speedway, which follows the Sprint Cup Bank of America 500, which starts at 1 p.m.

Both races were postponed by the rains brought in by Hurricane Matthew on Friday and Saturday. The Xfinity race was supposed to have run on Friday night and the big race would have been last night.

Gaughan, 41, a veteran driver of all three NASCAR series, including trucks, is happy with where he is — his No. 62 Chevrolet is part of Richard Childress Racing and is fourth in the Xfinity Chase standings.

“I’m at the twilight of my career, but I’m still having fun,” said Gaughan. “The Chase format and driving for RCR have got me where I still really enjoy doing this. The Chase format is exciting and we’re looking good to be able to advance to the next round.”

Another reason for Gaughan’s happiness is that Childress was fine with him moving back home to Las Vegas, where he has two children, ages 3 and 5 years old. It creates long commutes but he wouldn’t have any other way.

“I lived in North Carolina for years and still have a home near Charlotte, but I was spending 20 days out of the month away from my kids and I wasn’t happy,” said Gaughan. “Mr. Childress said, ‘you’re a grown man,’ meaning that he knew I would be where I needed to be when I needed to be there, regardless of where I was living.”

Gaughan has over 175 Xfinity series races under his belt, with two wins and 58 top 10 finishes. However, Gaughan had even more success in the truck series, with 217 starts over 14 years, eight wins and 80 top 10 finishes.

In NASCAR’s highest-level series, Sprint Cup (formerly Nextel and Winston Cup), Gaughan ran 50 races over five years. He had four top 10s and his first race was the 2004 Daytona 500, driving the No. 77 Dodge for Penske-Jasper Racing.

Gaughan’s top achievements include the 2002 Craftsman Truck Series Rookie of the Year award and the NASCAR Winston West Series champion in both 2000 and 2001.

Gaughan’s current RCR team is sponsored by American Ethanol, so the driver was also at Sheetz in support of that company’s E15 fuel. That fuel is available at 60 Sheetz locations across North Carolina.

Sheetz is also taking part in Growth Energy’s annual Pink Out program, where two cents from the sale of every gallon of E15 will be donated to the fight against breast cancer. Sheetz has chosen to direct their contributions to the American Cancer Society.

Gaughan’s team is also involved with Pit Stops for Hope, a collaboration of the racing community united together for the betterment of America’s youth.  Pit Stops for Hope invests in youth by primarily assisting food banks and academic instructors, feeling that food and education work hand and hand in producing success. Its mission “is to replace poverty with hope.”

“North Carolina has one of  higher child starvation rates in the country,” said Gaughan. “It’s actually pretty sad when you see the numbers, so Pit Stops for Hope raises money all year long. Our car at the Charlotte spring race was entirely a Pit Stops for Hope scheme, so anything we can do to help that cause is worth it.”