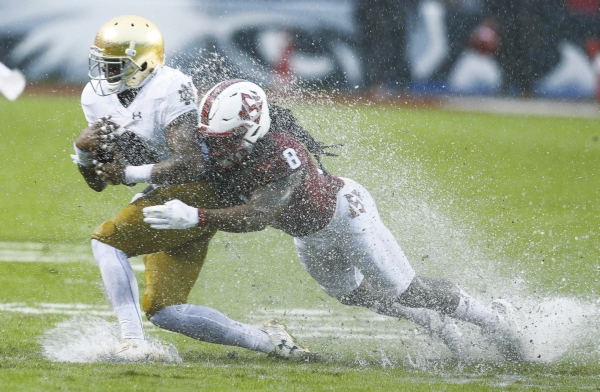 RALEIGH (AP) — One by one, the North Carolina State players took off running after the game ended, heading straight for the puddle at the 25-yard line.

After a sloppy day of belly-flops and splashdowns, it was time to turn the field at Carter-Finley Stadium into a slip-and-slide.

The Wolfpack beat Notre Dame 10-3 on Saturday in a game played in hurricane conditions and after the start of the second half was delayed because of lightning.

“This is a game to remember,” N.C. State tight end Pharoah McKeever said. “I’ll probably remember it until the day I die. Raining, playing in a hurricane, not knowing if we were going to play or not. Lightning delay, in the locker room for 30 more minutes. … And then after the game, doing field slides in the mud. This was just something to remember.”

A waterlogged field saturated by Hurricane Matthew’s heavy rains and wind-whipped by its gusts rendered both offenses ineffective, so N.C. State (4-1) beat the Fighting Irish (2-4) with special teams and defense — with Dexter Wright returning a blocked punt for the go-ahead touchdown with 12:43 remaining.

That TD came after McKeever fought through a block from Nic Weishar up the middle to deflect Tyler Newsome’s punt. All Wright had to do was scoop up the ball — not an easy task on a day like this — and head for the end zone.

Notre Dame put together a late drive into the N.C. State red zone, but a shotgun snap on fourth-and-8 squibbed past DeShone Kizer with 1:52 left and the Wolfpack ran out the clock.

The teams combined for five turnovers, had a total of 10 fumbles and lost four of them. In a sequence that perfectly captured the day, Notre Dame coughed the ball up with about 10 minutes left in the second quarter on a bad snap — only to get it right back when N.C. State fumbled on its next snap.

“Both teams had a hard time moving the football. Both field-goal kickers managed to eke one over the uprights in sloppy conditions. We give up a flippin’ blocked punt for a touchdown, and that’s the difference in this one.”

Notre Dame: The sloppy conditions helped the Fighting Irish’s oft-criticized defense post its best numbers of the season. After allowing at least 489 total yards to every Power Five opponent they’ve faced, they gave up just 198 yards in this one.

But that went both ways. The potent Fighting Irish offense managed just 113 total yards on 64 offensive plays, and had just 41 yards through three quarters. Kizer was sacked five times and was just 9 of 26 for 54 yards — the worst game of his career, aside from a 0-for-1 day against Texas last year.

“We don’t have any excuses,” Kelly said. “We were atrocious offensively.”

N.C. State: The weather also shackled the Wolfpack’s potent offense, which hung at least 30 points on every other opponent. QB Ryan Finley — who completed nearly 73 percent of his passes in four games — was just 5 of 12 for 27 yards with a rating of 60.6. He entered with a passer rating of 171.43 — good for 11th nationally.

But for N.C. State, the bottom line was this: With games against No. 3 Clemson, No. 7 Louisville, No. 23 Florida State, No. 17 North Carolina and No. 10 Miami still ahead on the schedule, this was a game the Wolfpack had to have.

Notre Dame: The Fighting Irish return home next week for their annual rivalry game with No. 15 Stanford.

N.C. State: The Wolfpack begin a brutal two-game Atlantic Division run on the road with a visit to Clemson next week, followed by a trip to Louisville.

Follow Joedy McCreary at http://twitter.com/joedyap . His work can be found at http://bigstory.ap.org/content/joedy-mccreary