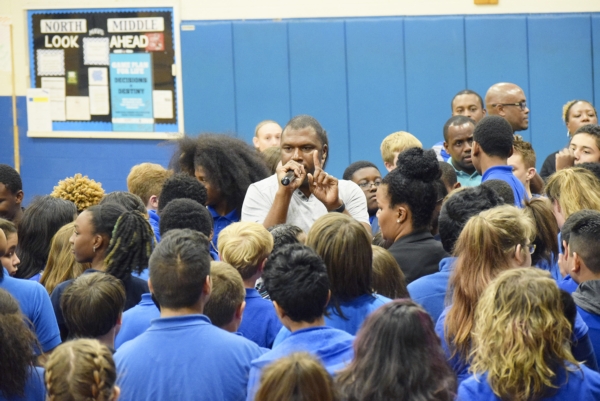 Musician Nigel Smith speaks to seventh graders at North Rowan Middle School as part of Game Plan for Life. Keeping with the theme of the show, Smith told students that their "decisions equal destiny" and encouraged them to make good choices and keep a positive attitude. Rebecca Rider/Salisbury Post

SPENCER — If you have a plan for your life, you can do anything. That was the message professional athletes passed on to seventh graders at North Rowan Middle School on Thursday.

It’s been 15 years since Game Plan for Life kicked off, and Terry Osborne, chief executive officer and general manager of the Rowan/Kannapolis Alcoholic Beverage Control Board said in that time he estimates the program has reached 130,000 students. Game Plan for Life is a program that brings motivational speakers to schools to discourage underage drinking and share stories about handling and overcoming adversity.

The Rowan/Kannapolis ABC Board, Rowan County Sheriff’s Office and Salisbury Police Department work together to bring the program to Rowan-Salisbury schools. Osborne said that’s one of the things that makes Game Plan for Life shine.

“It’s a great fixture to unify the community,” he said.

Seventh graders filled the bleachers at North Rowan on Thursday, clapping and cheering as they heard from speakers like Al Wood, a former basketball player for the University of North Carolina at Chapel Hill who went on to play in the NBA, and Jerome Harrison, a former running back for the NFL.

This year, speakers hammered home that the “decisions equal destiny.”

Both shared stories of their struggles, and how their lives or the lives of friends and family had been impacted by alcohol and bad choices. Wood said the program allowed students to learn life lessons from people who have lived and experienced struggles.

Wood shared a personal story about his mother, who struggled with alcoholism. One day, he said, his mother got blackout drunk and stabbed someone — Wood spent his weekends in high school and college visiting her in jail. When he grew older, he fell prey to the same addiction.

Wood said alcohol was something he didn’t know how to deal with or control until his son gave him an old photo of Wood playing basketball. Advertisements for liquor bottles were pasted over the picture. After that, Wood said, he got help.

“One of the words you’re going to have to say sometimes is ‘Somebody help me,’” he told students.

Wood told them that there is nothing wrong with asking for help if you need it. And if you have a goal for your life and know when to admit you need help, you can go anywhere.

“When we mess up, we admit it and move on,” he said was the message he hoped to send to the students.

Harrison said for him, the program was a way to give back. He encouraged the students to practice what they loved, a little bit each day, and to make good decisions.

“Every day you should do something towards your dream,” he said.

If they did, they’d find success. Harrison also encouraged students to say no to peer pressure and temptation.

Musician Nigel Smith also spoke, and talked about how a momentary bad decision could have devastating consequences. That’s why it’s important to have a goal for your life, a plan, and to follow it through, he said. It can be easy to get distracted, he said — but students should stick to the plan, and keep a good attitude. You get out of life what you put into it, he said, and your attitude determines how high you’ll go in life.

“You can be what you want to be. If you put your mind to it you can do anything,” he said.

Smith came with his band, Nigel and Friends, and performed several songs that got students up and moving.

Osborne said that the program has been “phenomenal” and he knows it’s making a difference. This year, Game Plan for Life is piloting its program in an area elementary school, as well.

“I think it betters the community,” Wood said.