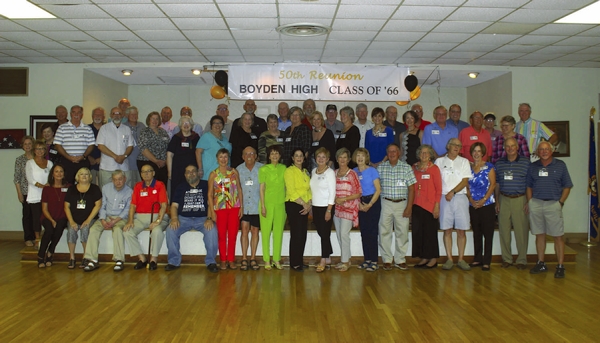 The Boyden High School Class of 1966 celebrated their 50th Reunion on September 23rd and 24th. This was their fourth reunion, following their 10th, 20th, and 25th, with 53 of the 220 class members gathering to talk, laugh, catch up, share memories, and renew friendships. The classmates’ husbands, wives, and guests were enthusiastically welcomed.

The celebration began on Friday evening at Hendrix Barbecue on West Innes Street, where Boyden students spent countless carefree hours hanging out when the restaurant was the renowned Blackwelder’s. Alumni from the Salisbury area happily greeted their classmates from out-of-town at the casual get-together. All were excited to see one another. Some of the group moved on to D.J.’s Restaurant for an after party.

The party resumed on Saturday evening as the group arrived at the Harold B. Jarrett American Legion Post, festively decorated with the Boyden High colors, black and gold. A replica of the school’s Yellow Jacket mascot sat upon the table where the 1963-1966 yearbooks and scrapbooks of previous reunions were placed. Favorite ’60s music set the mood for all to socialize and enjoy a buffet dinner. The evening ended with many farewells and hopes of another reunion soon.

The Civitan Club of Salisbury held their annual Awards and Installation Ceremony and Banquet at the Country Club of Salisbury Thursday night, September 29th.  This very pleasant evening event was attended by about sixty members and guests. The newly elected officers of the club for 2016-17 are: President/Board Chairman, Denise Daugherty; President Elect, Mark Curran; Immediate Past President, Karen South Jones; Vice President, Bill Bucher; Secretary, Nikki Eagle; Treasurer, Amanda Cauble; Comment Editor, Maggie Blackwell; Chaplain, Dr. Norman Sloop; Education, Nick Gennett; Sgt. at Arms, Raif Todd.  In addition, four new Directors for 2016-18 were initiated: John Graham, Rexx Rexrode, Kimberly Kelsey and Howard Torrence.  Others recognized for outstanding contributions included: Bill Bucher: Civitan of the Year, Salisbury Symphony Music Director and Conductor David Hagy: Citizen of the Year, and longtime member Dr. Norman Sloop: Perfect Attendance for 49 consecutive years.  Honor Keys for outstanding service were awarded to Past President John Sofley and Wanda Huntley, the winner of the coveted Civitan Hope Award, a unique award whose recipients are chosen at the International level.  Finally, the event was capped with a touching ceremony whereby Immediate Past President Karen South Jones handed off her president’s gavel to newly elected President Denise Daugherty.  Dr. Mark Beymer, a Past President of our Club and currently the Governor of the Civitan North Carolina District West, presided over the festivities with his customary personal charm, congratulating and charging each officer candidate with their respective duties and responsibilities and making everyone feel at ease.

•Chuck Brown (deceased) – funk guitarist known as the “Godfather of Go-go,” from Gaston.

•Ron Tyson – longtime member of the Temptations, from Monroe.

Rowan County Autism Support Group
Oct. 18/ from 6:30-8 p.m. and every third Tuesday
On Oct. 18 – Thriving in the Land of Autism – One Family’s Story of Hope, presenter: Susan King

Meet at First United Methodist Church – Room 108, 217 S Church St., enter on Church St side of building through doors at right of the courtyard