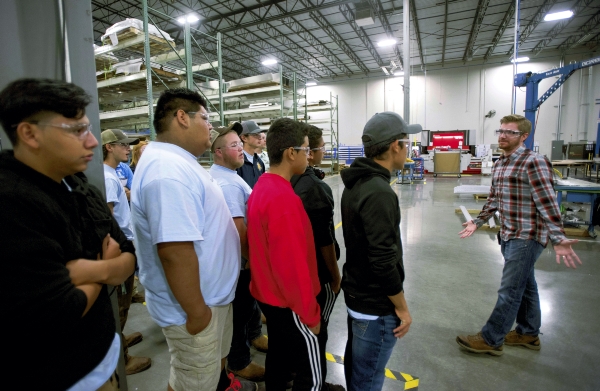 JON C. LAKEY / SALISBURY POST Production Engineer Brian Shiley explains the steps that his company goes through to build and assemble the componants in the compressed natural gas fuel systems. Students from West Rowan high school in the Ag Mechanics 1 class got a tour of the new Agility Fuel System facility during the 2016 Manufacturing Day. Agility Fuels Systems builds fuel systems for large class trucks to operate on compressed natural gas as a fuel source instead of the gasoline and diesel fuel. Friday, October 7, 2016, in Salisbury, N.C.

Manufacturing Day is an event to celebrate the manufacturing industry. The event occurs every year on the first Friday in October. Manufacturing facilities give tours and show visitors what they do and how they do it.

Students from the agriculture and mechanics classes at West Rowan High School showed up bright and early to get a tour of Agility Fuel Systems at 1010 Corporate Center Drive.

Shawn Adelsberger, director of operations at Agility, gave the students a short presentation about natural gas fuel systems, including information about what vehicles they might be found in, where they fill up and the range of the fuel.

Adelsberger told the students that companies use natural gas fuel because it is cheaper and more sustainable.

“Hopefully when you leave here today, not just here but at the Daimler facility, you’ll look at trucks a little differently,” Adelsberger said to the students.

Along with about 38 West Rowan High School students, students from Salisbury High School, North Rowan High School and Davie County High School visited manufacturing facilities around the county, including Continental Structural Plastics and the Daimler Trucks of North America facility in Cleveland. The public was invited to tour Power Curbers.

The event is organized to celebrate modern manufacturing and change the perceptions of the industry. In Rowan County, Manufacturing Day adds to the efforts to highlight the industry and inspire the next generation of manufacturers.

According to the North Carolina Association of Manufacturers, the state’s manufacturing jobs grew by almost 3 percent last year and is almost 21 percent of the state’s gross domestic product.

There was also a lunch for Rowan County manufacturers that featured a special presentation and roundtable discussion. Dr. Ellen Hughes-Cromwick, chief economist of the U.S. Department of Commerce, and Susan Kluttz, N.C. Department of Natural and Cultural Resources secretary, were special guests.

Kluttz said she had a good time meeting with Dr. Hughes-Cromwick and hearing what the manufacturers had to say during the discussion.

“I’m very proud that during this governor’s administration we’ve created more than 300,000 total jobs in the state, many of those in manufacturing,” she said.

Kluttz said she attended representing Governor Pat McCrory in order to thank manufacturers for what they do locally and for the state as a whole.

Economic development and job creation have been a focus for the governor, Kluttz said, and manufacturing jobs are an important factor.

“The most important thing is that manufacturing provides jobs for our citizens and produces the products that we need,” she said.

She also said she was proud of Robert Van Geons, executive director of RowanWorks, and other organizers for putting the day’s event together.

Hughes-Cromwick said she was impressed with the North Carolina Manufacturing Institute and its ability to train students with the skills manufacturing employers need.

“It’s really quite remarkable,” she said. “It’s a great incubator.”

She said a healthy manufacturing industry tends to lead to more jobs in other industries as well.

“Manufacturing is really an engine for economic growth,” she said.

During the tour at Agility, students walked through the facility while tour guides talked to them about things like how they paint products and fabricate materials.

They also explained how technology and automation were weaved throughout processes.

Matthew Owen, agriculture teacher, said he could talk about manufacturing all day, but it’s different when the students are actually able to see it in action.

“Everything we’re seeing here has some aspect of our class tied to it,” he said.

After the tour, students gathered together again and Adelsberger talked about employment qualifications.

“…Manufacturing isn’t for everyone, but it is for some people,” he told the students.

Bryson Coleman, a ninth-grader, said he thought the new technologies used in the facility were interesting, especially the robots and animated machinery.

Jesse Baker, an 11th-grader, said he enjoyed touring the facility and learning about the manufacturing process.

“It allows you to make money by using your ideas that you’re passionate about,” he said.

“I hope the students can walk away with a viable career path,” he said.