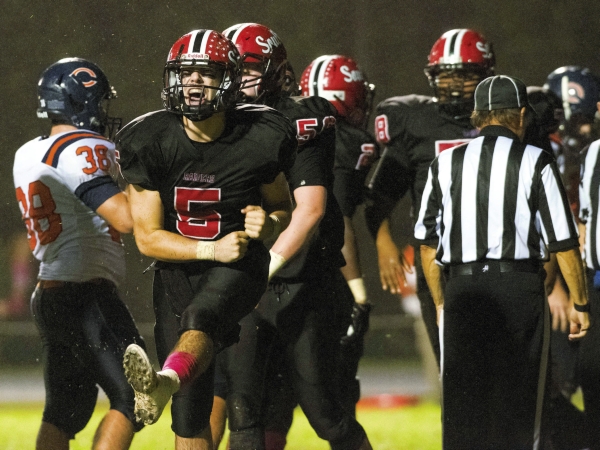 LANDIS —Roll over Beethoven — and tell Tchaikovsky the news: the SPC doesn’t have South Rowan to kick around anymore.

Not after the Raiders stunned the county and the conference Friday night when it beat visiting Carson, 19-16, for its first on-the-field victory since Nov. 7, 2014.

“It’s kind of hard to process right now,” second-year coach Daniel Yow said after South (1-6, 1-4) snapped a 17-game losing streak. “It’s a long time coming. A lot of hard days, a lot of long days that are finally paying off.”

The Raiders cashed in when quarterback Austin Chrismon corkscrewed into the end zone on a decisive, 5-yard touchdown run with 37.2 seconds remaining, setting off a celebration of Times Square proportion.

“I feel like I’m on top of the world,” Chrismon said after rushing for 164 and two touchdowns. “It’s about time we started playing like this. We played our brand of football and it clicked. We always knew we had this in us.”

The loss was equally benumbing for Carson (3-4, 2-3). The Cougars played without starting quarterback Owen White, its top real estate producer who was excused to attend a baseball activity. Junior fullback Cole Sifford filled in admirably, though Carson was weakened at two positions.

“Cole played a great game,” coach Joe Pinyan said after Sifford rushed for 96 yards and masterfully directed Carson on a go-ahead TD drive in the fourth quarter. “He did everything we asked him to do — and more. He led us and did enough for us to win the football game. We just didn’t play around him.”

Carson looked its sharpest on the game’s opening drive, when it navigated downfield like it had a police escort and took an 8-0 lead on junior James Kotcamp’s 5-yard run. A key moment came on the third play from scrimmage. Facing third-and-16 from the Cougars’ 26-yard line, Sifford found a seam and began shucking defenders left and right on a 58-yard sprint down the right sideline. Four snaps later they were on the scoreboard.

“We came in knowing this wasn’t going to be easy,” South defensive tackle Xavier Steele said. “They came out and fought us, but this time we fought back.”

They did. South responded with two long drives in the second period. The first lasted nine plays — including Chrismon’s 32-yard pickup out of a fourth-and-long punting set. Sophomore Michael Sloop cut SR’s deficit to 8-6 when he bulldozed over the goal line from two yards away.

South next possession consumed more than six minutes. Chrismon guided the Raiders from their own 30 to the Carson eight, but the drive stalled when his hurried pass was picked off by Carson ball-magnet Brenden Westbrook with 27 seconds to play in the half.

“We didn’t score,” Chrismon said afterward. “But that drive showed we could dictate how this game would end.”

South took its first lead of the game — and the season, for that matter — after taking the second-half kickoff and marching 91 yards on 19 plays for a touchdown. The drive melted more than eight minutes off the clock and ended when Chrismon scored on a quarterback sneak. Running backs Sayquan Anthony, Mark Austin and Chrismon seemed to sled downfield behind an inspired offensive line.

“We played super aggressive,” right guard Keshaun Bradley said. “We executed well and stuck to our rule — block your man.”

South finished with a season-best 260 yards on the ground. “They got shoe-to shoe and toe-to-toe and ran the ball hard,” Pinyan said in the post-game mist. “It probably shouldn’t have been as close as it was. In the first half, after we scored, we had a chance to put them away. But we just didn’t take on blocks, didn’t tackle and didn’t stop them. We did everything wrong on defense than we could do.”

The Cougars reclaimed the lead with 3:02 to go on Andrew Jerman’s short run, but an unsportsmanlike conduct penalty on the ensuing two-point conversion cost them. South’s final possession began on the Carson 43, and Chrismon needed just two minutes to put the ball in the end zone.

“This game was ours for the taking, right from the beginning,” said South’s Marquis Rhyne. “We did what we were supposed to do and the scoreboard shows it.”

But like any good drama, the outcome wasn’t revealed until the closing scene. It took a Chrismon interception with less than 20 seconds remaining to seal the deal.

“That play unfolded right in front of me,” he said after snagging a Sifford pass near midfield. “It came right to me.”

And put the Raiders on top of the world.