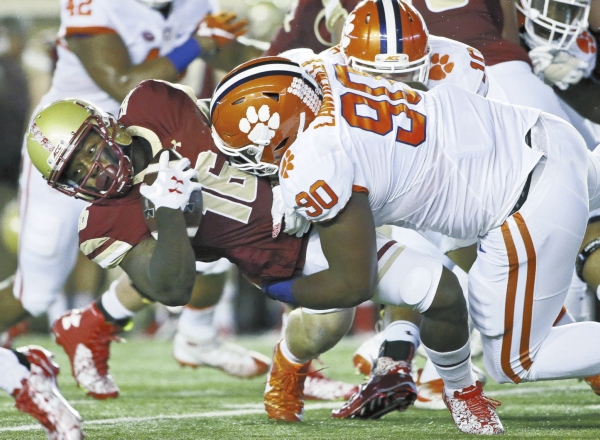 Boston College running back Davon Jones (16) is brought down by Clemson defensive tackle Dexter Lawrence (90) during the first half of an NCAA football game Friday, Oct. 7, 2016, in Boston. (AP Photo/Elise Amendola)

Clemson broke three plays of at least 50 yards in the first quarter, two for touchdowns and another that set up a score. Watson picked off a defender on the edge to help spring Gallman for the game’s first touchdown. Watson’s 59-yard touchdown pass to Jordan Leggett made it 21-0 late in the first half. That was all the Tigers needed.

Clemson:  Hard to expect an A-plus effort from the Tigers, who were coming off a draining, dramatic victory against Louisville and traveled north on short rest. There were plenty of Clemson fans in the sellout crowd of 44,500, but not much intensity in Alumni Stadium. Still, the Tigers took care of business and seemed to come out of the game healthy.

Boston College: The Eagles just can’t match-up against this level of opposition. BC’s best first-half drive covered 80 yards and got inside the Clemson 1. Twice on fourth-and-goal, quarterback Patrick Towles fumbled the snap because center Jim Cashman was knocked into the backfield by Tigers tackle Scott Pagano. The first one was wiped out by an offside penalty by Clemson, so Pagano did it again.

The former Falcons coaches will go against each other Saturday night when the uptempo Orange (2-3, 0-1) visit the Demon Deacons (4-1, 1-1).

“This is at warp speed,” Clawson said of the Syracuse offense. “It’s as fast an offense as I’ve ever seen, and it’s hard to prepare for that tempo.”

That appears to be a reflection of their new coach and his go-go-go mentality.

In this matchup of teams picked to finish near the bottom of the division standings, the most intriguing subplot might be the ties between the head coaches trying to guide their programs back to prominence.

When Clawson left Bowling Green to take the Wake Forest job after the 2013 season, the Falcons picked Babers as his replacement. Babers took Bowling Green to two bowls before he was hired by Syracuse to take over for the fired Scott Shafer.

“One of the things try to do when one is going out and another is coming in, if it’s a positive situation, you try to touch base and give Cliff’s Notes, so to speak, of what you’re leaving behind,” Babers said. “He and I got an opportunity to do that.”

After two tough seasons with the Demon Deacons, Clawson has them showing considerable improvement in Year 3. Wake Forest started 4-0 for the first time in a decade and — with a favorable schedule ahead — looks capable of reaching the six-win mark and reaching its first bowl since 2011.

Syracuse is trying to make a similar climb under Babers. The Orange have won just three ACC games in the last two-plus years and Babers has preached patience as he tries to rebuild the proud program.

“The main thing is it’s a process,” Babers said. “The process is, you have certain things you have to do and if you do those things you’re going to give yourself an opportunity to win. They need to stay locked in on the process and not get caught up on what the scoreboard says.”

DURHAM (AP) — If Duke can’t keep its grip on the ball, the Blue Devils might lose control of their season, too.

A suddenly turnover-prone Duke team plays host to an improved Army on Saturday. The Blue Devils (2-3) rank last in the Atlantic Coast Conference and 123rd nationally in turnover margin, with 17 giveaways to 10 takeaways. The Black Knights (3-1) are fifth in the Bowl Subdivision in that stat category and had no turnovers in their first three games. Only two teams have turned it over less often.

And with Hurricane Matthew churning up the East Coast, and threatening to dump rain on Wallace Wade Stadium, ball security will be at even more of a premium.

“If it’s windy and rainy, we’ve both got to kick the ball and throw the ball,” Army coach Jeff Monken said. “The ball will exchange hands and we’ve got to take care of it. I’m sure they’re going to emphasize the same thing.”

That’s a certainty — especially after how the Blue Devils’ last game went.

Duke had six turnovers in a 34-20 loss to Virginia, including a fumble that was recovered for the game-sealing touchdown and five interceptions — with four of them coming in a 20-minute stretch of the first half. The Blue Devils haven’t had fewer than three turnovers in any home game.

They’ll have to overcome those self-inflicted wounds if they’re going to turn the season around and reach their fifth straight bowl game.

Yet Cutcliffe insists the team has not — and will not — fracture.

“They know who the program is. They know what the program’s about. That will never falter,” Cutcliffe said. “That’s not going to change. We’ve said it for years that you don’t ever run from it, you run to it — meaning challenges, problems, issues. … Wherever you stumble, that’s where your hidden treasure is buried. You just look for it.”

Some things to know about the Army-Duke game:

ARMY’S GROUND GAME: The Black Knights once again lead the nation in rushing — as they did in 2011 and ‘12 — averaging nearly 375 yards with their trademark triple-option offensive system. Their three starters in the backfield are sophomores and RB Andy Davidson leads the way with a 103-yard average and six touchdowns. “Running the ball is one thing,” Monken said, “but the bottom line is you have to score points.”

GOOD KNIGHT ON D: Not to be outdone, Army’s defense ranks 10th nationally, allowing 264 yards, and is ninth against the run, giving up 87.5 yards per game. “Everybody wants to talk about their offense, but their defense causes you a lot of problems with their configuration,” Cutcliffe said.

DUKE’S PRESSURE: The Blue Devils join a pair of top 10 teams — No. 1 Alabama and No. 6 Houston — with at least three sacks in every game this season. That streak might be in jeopardy this week because the run-first Black Knights have only thrown 29 passes all year.

Some things to know about the Syracuse-Wake Forest game:

SPEEDY SYRACUSE: The Orange rank fourth in the ACC in total offense, averaging 495 yards per game, but they’ve also run the most plays in the league (433). That fast pace will pose a challenge for a Wake Forest defense that ranks in the middle of the pack in the conference, and has allowed early scores in each of its three games against Power Five opponents. “It is almost like preparing for a triple-option team,” Clawson said. “You can try simulate it, but you are never going to simulate it as well as they do it.”

ORANGE COMBO: The pass-catch combination of QB Eric Dungey and WR Amba Etta-Tawo has put up some impressive numbers. Dungey leads the league with an average of 346 yards passing, while Etta-Tawo is tops with both 9.4 catches and 168 yards receiving per game and set a school record with 270 yards two weeks ago at Connecticut. “We have some good stats,” Dungey said, “but we have to put more points on the board.”

THE SERIES: This is the fifth meeting between the schools, with all coming since 2006. The Orange have won the past four, including all three since they joined the ACC before the 2013 season.

BACK TO THE RUN: Wake Forest probably wants to get back to rushing the ball. The Demon Deacons had just 21 rushes in last week’s loss at N.C. State , their fewest under Clawson. That’s partly due to the absence of RB Cade Carney, a freshman who has missed three games due to injury, and partly because they fell behind 17-0 in the first quarter.