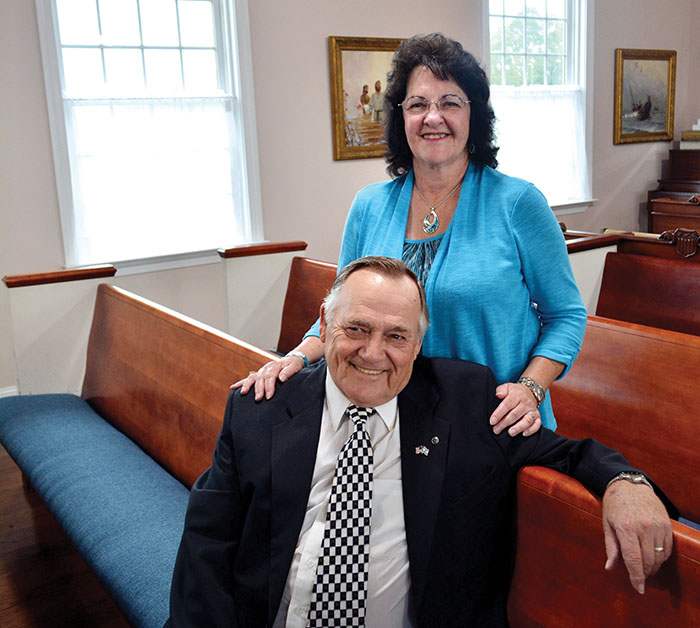 Gaylord and Mary Millspaugh have been married for 50 years. They have three sons and four grandchildren. Photo by Susan Shinn, for the Salisbury Post.

Echoing Spring Christian Church will host a service of dedication next Sunday, Oct. 16, at 10:30 a.m.

The church groundbreaking was some 11 months ago. This is the first congregation that its pastor, The Rev. Gaylord Millspaugh, has founded in his 40 years of ministry.

“It’s one of the things we’ve wanted to do for a long, long time,” Millspaugh says.

The simple wood structure is 2,462 square feet and seats about 125. There are also 16 wooden desks — replicas of those used by the Continental Congress — in the back of the sanctuary that are used for Wednesday night Bible study.

Millspaugh designed the handsome altar railings to include the word “Jesus” on the left and “Christ” on the right.

Millspaugh’s daughter-in-law, Laura, says that just because Echoing Spring is an “old-fashioned” church doesn’t mean its approach is antiquated.

“We prefer this type of worship,” she says of herself and her husband, Matthew. “I was raised in this country type of atmosphere. It worked for my grandparents and great-grandparents, and in 2016, it works for me.”

“I do what I can to make the word of God relevant to the listener,” Millspaugh says. “If you can’t apply it for your life, it’s of no value.”

For him, sermons are building blocks that transport the listener to a higher plane of living. “It’s intended to make your life better. I was 33 when I was saved. I wouldn’t stay with it so long if it weren’t real. I expect it to impact people’s lives. That’s what old-fashioned religion does.”

Millspaugh and his family are definitely doing something about it. He and his wife, Mary, have been married for 50 years, and they have two other sons along with Matthew, Gaylord III and Cameron.

Millspaugh founded the congregation on Dec. 30, 2007. A friend urged him to start a church.

“It takes a special breed of people to start a new church,” Millspaugh admits. But he said he’d have a Bible study.

So a few people gathered around a picnic table in a business office. Then a couple offered their home. Others began coming. Someone made a request for a Sunday service.

“We moved around to different homes each Sunday so as not to burden any one family,” Millspaugh says.

People made donations and, because Millspaugh was bi-vocational and not drawing a salary to minister, he opened a bank account to put money aside. Soon, they found an empty building available for use.

Millspaugh secured non-profit status for the fledging congregation and wrote a check for $70,000 to start the church. “We were off and running at that.”

Donations continued to come in over the year. Matthew Millspaugh found the property on which the church would break ground. It was owned by Homer and Sheila Cannon, owners of Wife for Hire.

“I loved it immediately,” Millspaugh says. He told the Cannons he’d like to build a church on 5 acres, and they loved the idea.

Ultimately, land purchase and construction of the church turned into a $400,000 project. The church will be dedicated with no debt, Millspaugh says. The Millspaughs served as general contractors, which saved money. They purchased furnishings on eBay. A school bell from Baltimore now sits in the steeple. The pews came from a church in Tampa; the altar, from a church in Canton, Ohio.

Millspaugh looked into getting an indoor baptistery. When he found out that would be $30,000, he settled on an outdoor horse trough for $260. Which is appropriate considering the church is located among rolling pastureland and next door to a horse farm. He even told one horsewoman he intends to install a hitching post for those horse enthusiasts who would like to ride to church.

Interestingly, there are no offering plates in the sanctuary, save for one that’s definitely seen better days. That’s because Millspaugh often throws it to the floor and steps into it.

“That’s what God wants you to put in the plate — yourself,” he explains.

An offering box is located at the back of the sanctuary, because members’ giving is between them and the Lord, Mary Millspaugh says.

The congregation is also heavily involved with the National Conference of Christians and Jews.

“My boss was a Jew,” Millspaugh quips.

Through the Wings of Eagles program, the congregation has helped some 36 Jews return to their homeland, Mary Millspaugh notes.

“I’d like to plaque the heck out of this wall,” Millspaugh says, referring to the congregation’s plan to help even more Jews return to Israel.

Another plaque nearby is beneath a Route 66 sign, with the names of folks who have read the Bible all the way through.

“It’s the route we’re all supposed to take in life,” Millspaugh explains.

For now, a piano sits in the back of the sanctuary. On most Sundays, the congregation sings old, familiar hymns accompanied by a keyboard.

Millspaugh prefers this type of worship style to a contemporary format, he says. “To me, Jesus is the show. This is not a place of entertainment. This is a place of interchangement.”