Davie County scores another big win — this one over West Forsyth 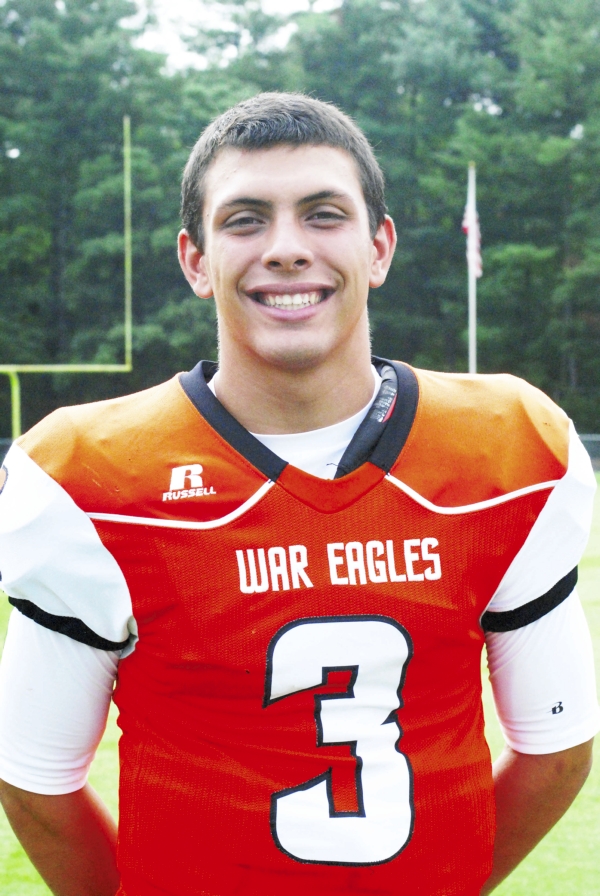 CLEMMONS — Davie County picked up more believers, and the War Eagles exorcised another demon during a breakthrough season.
Davie’s vaunted defense kept West Forsyth under its thumb all night, Chris Reynolds and the offense finally found a big play to gain separation in the fourth quarter and the War Eagles pulled away to a precious 20-3 victory.
Davie is 7-1 for the first time in 10 years, and it is 3-0 in the Central Piedmont Conference for the first time in 12 years. The Titans fell to 5-2, 1-1.
West was just the latest victim in Davie’s payback journey, following triumphs over Page, West Rowan and Reagan. Davie topped West for the first time since 2011, when Adam Smith was a star quarterback.
The star QB these days, Reynolds, accounted for 260 of Davie’s 281 yards, going 17 of 31 for 201 passing yards and leading his team with 59 rushing yards. It was his 12th 200-yard passing game in two years, two shy of the school record.
“Chris is a warrior,” Davie coach DeVore Holman. “He’s not going to let us come up short, if he has anything to do with it. (West has) a heckuva defense, but Chris picked us up.”
But most of the credit for this one goes to Davie’s defense, which held a fifth opponent to seven points or less.
“It was probably one of the best defensive games I’ve had in my career,” linebacker James Boyle said. “The defense worked together. We flew around all week and were ready to prove to everybody in the CPC that we’re probably one of the best defenses around. We believe we can compete with anybody.”
The first half was marked by missed opportunities for the War Eagles, who controlled field position but failed to take advantage and only led 6-0 at the half.
Davie found the end zone on its fourth possession. Cooper Wall’s 23- and 21-yard receptions on back-to-back plays put Davie at the West 5, and Reynolds ran it in from there. Jared Griggs’ point-after kick, however, was wide left to leave things at 6-0.
Cornerback Angel Perez intercepted West quarterback Drew Latham on West’s third snap of the game. Outside linebacker Jack Little delivered the loudest hit of the game to force a punt. Boyle knocked running back Marcus Caldwell 4 yards back to lead to one of West’s eight punts. Outside linebacker Broc Barnette turned a screen pass into a 5-yard loss two plays before he sacked Latham.
But West remained in contention by bending but not breaking on defense, with JaQuan McMillian intercepting a deep ball to Wall at the West 6 with 1:24 left in the half.
The tense struggle only intensified in the third quarter. West’s Zach Brinkley intercepted a pass intended for Beau Byerly with 4:52 left in the third, and after a short return to the Davie 20, West had a golden opportunity to take the upper hand.
But Davie’s defense declined an invitation to roll over. After Caldwell gained a yard on first down, safety Hite Merrifield denied a deep ball to Jordan Goco, and Perez covered up K.J. Henry on a fade route to the end zone. As a result, West had to settle for a 37-yard field goal.
“It was huge to force a field goal right there,” Boyle said. “This is the best set of DBs I’ve had in my high-school career. They played their butts off tonight.”
Plays against the pass by Perez and Barnette forced a three-and-out on West’s next series. With the score 6-3, that set the stage for the game’s pivotal moment. On third-and-10 from the Davie 22, Reynolds came through with a vintage completion – 25 yards to Byerly.
“Chris always makes a good throw and puts it on a dime,” Byerly said. “Honestly, I didn’t think I was going to catch it. It was such a tight window. As soon as I touched the ball, I got hit from both sides.”
Five plays later, Reynolds completed a monster throw to Mason Wilson, who made a juke at the West 15 and raced home for a 26-yard TD that allowed Davie to exhale with a 13-3 lead and 9:16 to go.
“Mason did a heckuva job tonight,” Byerly said. “He’ll remember this for the rest of his life, and it’s one of the greatest feelings I’ve ever had.”
The backbreaker came four minutes later, when two War Eagles sandwiched backup QB Gianni Smith to cause an errant throw that linebacker Cody Hendrix intercepted. Hendrix hit the right sideline and had nothing but green grass in his path, the 70-yard TD return slamming the door at 20-3.
“I just dropped back, Broc had (Smith) held up and he was trying to throw it away,” Hendrix said. “It landed right in my arms. It was just a footrace then. I’d never had that experience before. It was awesome.”
“I’ve never been happier than when I saw that dude (Hendrix) running down the field,” Little said. “Never. I was pumped.”
While West limited go-to man Wall to three catches for 46 yards, this night reaffirmed that Davie’s receivers as a whole are darn good. Wilson had game highs in catches (five) and receiving yards (75).
There is no overstating how tough the Davie defense has become. West managed just 110 rushing yards, averaging 2.8 per attempt. Latham and Smith went a combined 8 of 25 for 86 yards, averaging 3.4 yards per pass play. The Titans went 2 for 14 on third down.
“Without them, we don’t win this game,” Reynolds said of the defense. “They’re the backbone of this team. They’re all different. You’ve got the front four with Spencer (Wilson), who is always bringing excitement. He’s always into it. He’s the biggest team player and wants to win. James and Cody are probably the best linebackers around.”