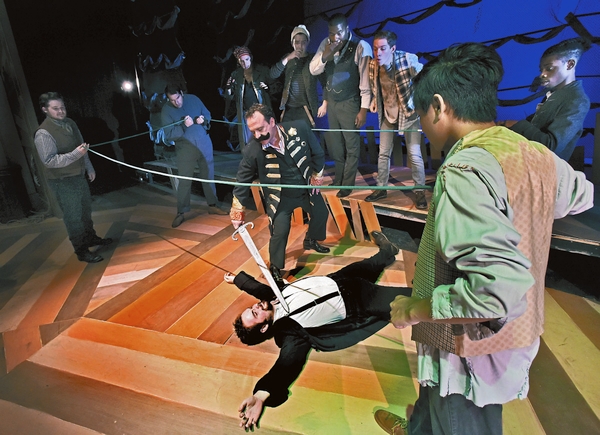 Josh Wainwright (Black Stache) holds a sword to the neck of Austin Young (Bill Slank) in the play "Peter and the Star Catcher" presented by the Piedmont Players. In back are the "Mollusks." Photo by Wayne Hinshaw, for the Salisbury Post

How did Peter Pan find his way to Neverland? Here’s one theory

If you’re in the mood for something silly, with moments of tenderness, try “Peter and the Starcatcher,” Piedmont Players’ newest production.

With sing-song rhymes, groan-able puns, sight gags, references to all types of music and a hearrrrrty cast, the farce with bits of music is a fun night, though you will have to pay attention.

Let’s start with the story of Peter Pan — you remember that, right? The boy who would not grow up, the pirate, the crocodile, Wendy, etc. Well, this takes place before all that — you find out what made a nameless orphan into the amazing Peter Pan.

The playwright, Rick Elice, co-wrote “Jersey Boys,” and the composer, Wayne Barker, who wrote “Dame Edna: Back With a Vengeance,” based the play on a novel by Dave Barry (yes, that one) and Ridley Pearson, a crime novelist. There, that mixes things up, doesn’t it?

There’s an English Lord charged with getting rid of something for Queen Victoria (God Bless the Queen!) He takes his young daughter Molly along, and they have something no one  understands — a long distance communication in the days of sailing ships and crafty pirates.

Well, the pirates are so crafty they manage to pull the old switcheroo — all trunks look alike. The ships Neverland (hint) and the Wasp set out to a far kingdom to do what must be done. For the pirates, that’s stealing the treasure Lord Aster, played heartily by Shawn Van Wallendael, is transporting for the queen.

Brilliant daughter Molly is set up as a decoy for the mission — or is she? Brooke Baldwin is the oh-so-clever Molly, who insists on being a leader, no matter what the situation. Baldwin is bossy and smart.

The pirates have stolen three boys, Ted, who’s always hungry, played by Sirravada Norng, and Prentiss, who keeps declaring he’s the leader, played by Tanner Groppi. With them is a nameless boy, played by Joe Cornacchione, who gets to shine in more ways than one in the second act.

Brien Lewis is Molly’s nanny — lovely in his apron and bonnet as Mrs. Bumbrake. The Catawba College president is having a good time.

Alf, a nasty pirate who takes a liking to Mrs. Bum, is played by Jeremy Peterson, with a hangdog look that makes him sort of like an overgrown puppy.

But you ain’t seen nothing yet — until the audience is introduced to the dread pirate, Black Stache, played with vim and vigor and a lot of bad rhymes, by Josh Wainwright, who is also Piedmont’s marketing director. He swashes a bit of buckle in this role. His faithful sidekick, Smee, is played with a gnarly flourish by Benjamin Thomas-Reid.

Balancing out the wackiness is serious and dependable Captain Robert Falcon Scott, played by Darius Price.

So, a lot of the story is told in the first act. Here’s where you pick up all the threads that may — or may not — knit together into the story of Peter Pan. There’s lots of pirate talk and pirate action, loud voices and rough play.

Prepare yourself for the beginning of act two, when the stuff in the trunk transforms the pirates into — no way am I going to spoil that. It’s a show stopper, let’s leave it at that. Hilarious.

The action really picks up in the second half, as pirates chase each other, the boys, Molly and, wait, where’s Lord Aster? Keep paying attention, listen to the banter. Much will be revealed. And then even more by Lewis, who’s now dressed as a — nope, not going to spoil that, either — and gives the newly named boy, Peter, a last name.

It’s all about starstuff, the treasure the Queen needs removed. It’s far too dangerous if it gets in the wrong hands — or teeth. You’ll learn here why the crocodile ticks, and how Black Stache loses his hand — another funny bit that’s dragged out as long as possible.

Meeting the Mollusks is another special treat, and speaking of treats, listen to how they talk. Pasta fajole! Watch out for Fighting Prawn and Hawking Clam, thanks to the antics of Jon Mitchell and Austin Young.

Lots of funny bits make up this play, but Peter’s story isn’t quite lost. You’ll learn the origin of several of his legends as you watch. And you’ll also find out what and who is a starcatcher.

Some of the audience didn’t get the inside jokes, but they got the broad farce. Kids might be a little confused, but the teens there on opening night had a good time.

Running at two hours, including a 20-minute intermission, it’s a good way to spend an evening and stop thinking about the weather.

Director and designer Reid Leonard was clever with his set and his cast. Vocal director Adrian Smith should also get credit for such a rousing round of accents and tightening the verbal interplay.

“Peter and the Starcatcher,” underwritten by Carrol Fisher Construction Co. and Crescent Construction Services, continues Friday and Saturday night and Oct. 12-15 at 7:30 p.m. at the Meroney Theater, 213 S. Main St. There will be a 2:30 p.m. matinee Sunday, Oct. 9. For tickets, call 704-633-5471 or go to www.piedmontplayers.com.

SALISBURY — Salisbury Police and Hefner VA Medical Center Police are investigating the death of a 2-year-old found locked in a... read more