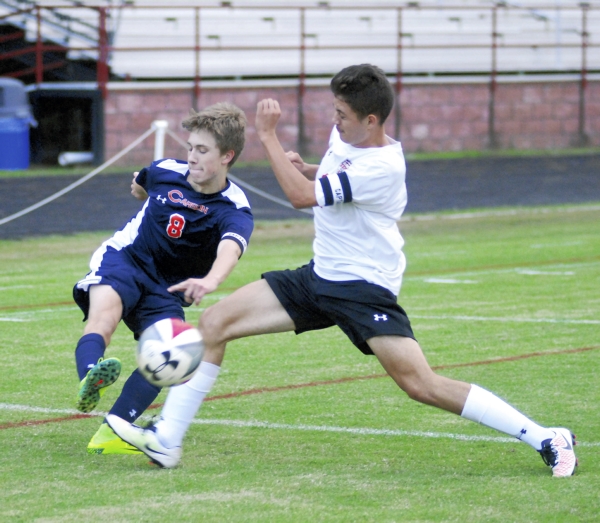 LANDIS — Senior goalkeeper Cameron Corriher’s smile was a wide as the goal crease after South Rowan’s boys soccer team beat Carson, 3-1, on Thursday at Donnell Stadium.
“Christmas came early this year,” Corriher said. “This meant a lot, especially to the seniors. None of us had ever beaten Carson. This was our last chance.”
Both teams are in the bottom half of the South Piedmont Conference standings, but the match mattered. The opponents knew each other well and some had grown up as teammates. There was plenty of emotion, and there was a joyful roar — like someone had scored a touchdown for the Raiders — as Corriher held the ball in the final seconds.
Carson (4-9-1, 4-8 SPC) had won the first meeting this season, a scoreless struggle for 77 minutes that was finally decided, 1-0, on a goal by Carson lightning bolt Khalid Myers.
But South’s defenders owned the rematch. Senior left back John Fulton and senior center back Adrian Figueroa turned in special efforts. They shut down the dangerous Myers as well as Raunel Vasquez, who has a powerful cannon attached to his left ankle.
“We know them so well, and we know what they like to do,” Figueroa said. “We kept them from getting the ball where they wanted to get it. We allowed them to take some bad shots. We know Cameron is so good behind us that he’s not going to get beat by bad shots.”
South (5-9-1, 4-7 SPC) got two goals from swift freshman forward Eber Tapia and one from junior German Delgado.
South was by far the more energetic team at the outset and dominated the first 30 minutes.
“They wanted it a lot more early and they came out a lot stronger than we did,” Carson coach Ken Correll said.
Barely a minute into the match, Miguel Bernal made a throw-in that Tapi headed past keeper Grayson Owens, and that quick goal allowed South to play from in front all night.
“We caught them off-guard a little bit,” South coach Kyle Neal said. “Miguel hasn’t been making the throws.”
Fourteen minutes into the first half, the Raiders struck again. The second goal came on a wonderful shot by Tapia. He had Owens coming at him, but he chipped the ball over his head and had enough touch that it settled peacefully into the net for a 2-0 lead.
South came at Owens in waves in those first 30 minutes. He made several great stops and kept Carson from being blown away.
With 17 minutes left in the half, South freshman Logan Carter made a play. Pushing down the right side, Carter had his chance to shoot, but he passed it up and made the centering feed that created a goal-scoring opportunity for Delgado. Delgado calmly finished.
“Logan was lights-out all night,” Neal said. “He played with patience and composure. On that goal that made it 3-0, everyone was screaming at him to take the shot, but he was very unselfish.”
But in the last 10 minutes of the opening half, Carson woke up, looked a different team and stepped up the pressure. Sophomore Edwing Sanchez got the Cougars on the board less than two minutes before halftime. Corriher had come way out of the box, and South turned the ball over suddenly. Sanchez took advantage.
“Part of that goal was on me,” Corriher said. “Just a mistake, a miscommunication.”
The goal energized Carson. The Cougars spent the rest of the half attacking. South was relieved to take a 3-1 lead to the break.
“Coach Neal told us that halftime could not have come at a better time for us,” Corriher said. “But we knew what we needed to do in the second half.”
Carson possessed the ball most of the second half and peppered Corriher with shots, but he and South’s defensive crew answered the challenge.
“You have to pay attention and stay alert every second against players like Myers and Vasquez,” Figueroa said. “But we always saw where our man was. We were always moving toward the ball.”
South defenders had several deflections on point-blank shots, and Corriher made diving saves and leaping saves. South got it done.
“We controlled the second half,” Correll said. “But South packed in their defense tight, and we just couldn’t finish. South did enough in the first half to win it. Kyle is doing a great job with their program.”
It was a huge win for Neal, a former Carson assistant who is working to elevate South soccer. It’s been tough going in the SPC, but South has several impressive sophomores and freshmen who can make noise when South moves down to the 2A level next season. Tapia has the skills and tools to be a big-time striker.
“Carson really came at us in the second half,” Neal said. “We didn’t want to be hanging on for dear life, but our kids did hang on. It’s an important win, an important benchmark for our program.”