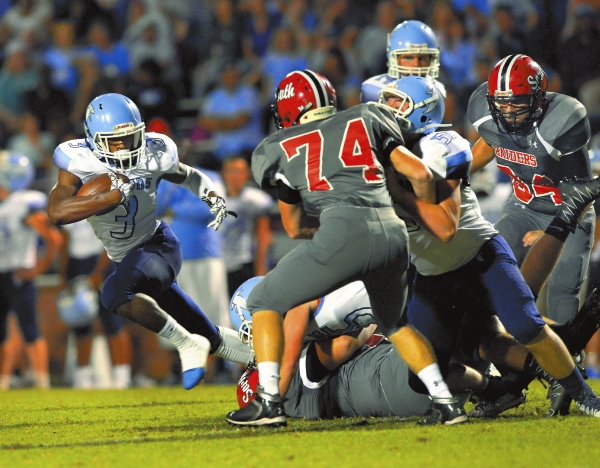 Carson opened in 2006, 4.9 miles away from South Rowan, and South Rowan athletics have been in an uphill fight in football since that year.
South was still competing in 4A in 2006 and went 3-8. All three wins came against 4A opponents in the Central Piedmont Conference, which was a tribute to then-head coach Jason Rollins, his assistants, and they guys who played on that team.
South won all three of the games in which it had any chance at all. But the handwriting was on the wall. The eight losses were by scores of 41-13, 44-7, 51-0, 54-0, 55-0, 55-0 again, 56-0 and 63-20. It seemed that every week the Post was reluctantly reporting on the latest worst loss in school history or the most points allowed in school history.
South headed down to 3A with a realignment that began with the 2007 season.
There was a brief reversal of South’s football fortunes in the 2008-09 seasons as an exceptional group of athletes came through the school. Fans will remember B.J. Grant, Blake Houston, Mark McDaniel, Cadarreus Mason and D’Andre Harris, to name a few, and that group would be bolstered by the transfer of a talented East Rowan back named Thomas Lowe.
South went 5-4 in the North Piedmont Conference in 2008 and 5-7 overall. South was one bizarre play against West Iredell — the Warriors threw a touchdown pass on a play on which South blocked a field goal — from being 6-6 and 6-3 in the league.
South went 9-3 in 2009 and was 5-1 in the NPC. The league loss was on the road against a tremendous West Rowan team that was headed for a state championship.
But the Raiders basically have been in free fall since 2009, the last season that they beat A.L. Brown, the last season that they beat Carson, and the last season that they beat some other people.
From 2010-12, South’s last three years in the NPC, South was 2-14 in league games and 5-26 overall.
It got even tougher when another realignment meant a league change to the South Piedmont Conference in 2013.
South is 4-35 overall in the last four seasons, with one of those four wins coming by forfeit. South is 2-27 in SPC games in that stretch. Those two SPC wins came against Northwest Cabarrus and East Rowan in the 2014 season, when South had a good defense and played most opponents tough.
South has lost 13 straight SPC games heading into tonight’s encounter with Carson, and the chances of ending that streak this season don’t look promising.
The effort is going to be there, the effort is always there, but it’s not likely South will be good enough to beat Carson, Central Cabarrus, Hickory Ridge, Robinson or East Rowan.
Since 2006, South is 29-87 overall and 22-51 in conference games. South hasn’t been in a playoff game since 2009 and hasn’t won one since 2003.
South is a relatively small school now with 900 or so students, and the move that’s coming down to 2A for the 2017-18 school year will be a welcome one for coach Daniel Yow and everyone associated with South football. Playing a 2A schedule won’t suddenly make South good — there could be some long Friday nights against programs such as Ledford and North Davidson — but the Raiders will have a chance to win a lot more often than they do now.
•••
The picks were 5-1 last week. The miss was on A.L. Brown’s win against Vance.
The season record is 28-9.
Salisbury played at East Davidson and A.L. Brown played at Robinson on Thursday due to weather concerns. North Rowan is off this week.

NW CABARRUS (1-5, 1-3 SPC) at EAST ROWAN (2-4, 1-3 SPC)
What happened in 2015: East walloped the Trojans, 36-13, with Max Wall carrying 11 times for 241 yards and three touchdowns.
The series: It’s been a good one and occasionally a wild one. Northwest leads it, 17-16.
History: Northwest’s most recent win against the Mustangs came in 2008. East has easily beaten the Trojans since they became SPC opponents in 2014.
Outlook: East has much better defensive and offensive numbers and should beat the Trojans again. Northwest’s lone win was a one-point decision against South Rowan. East’s league win came against Cox Mill.
Pick: East Rowan 35, NW Cabarrus 17

CENTRAL CABARRUS (2-4, 1-3 SPC) at WEST ROWAN (5-1, 4-0 SPC)
What happened in 2015: West had its hands full with the Vikings and trailed, 14-0, before prevailing, 21-14.
The series: The Vikings lead, 9-8. West has won the last two meetings. Central’s most recent win was in 2013.
History: Central’s last visit to Mount Ulla was one of the strangest games of all-time. After a series of penalties, injuries and a lightning delay, it ended at 11:30 p.m.
Outlook: Central’s stunning victory against Concord last week shocked the world. Central had started SPC play, 0-3, with losses to Robinson, Hickory Ridge and Carson.
Still, West has to be favored. The Falcons beat two teams that beat Central.
Pick: West Rowan 21, Central Cabarrus 14

DAVIE COUNTY (6-1, 2-0 CPC) at WEST FORSYTH (5-1, 1-0 CPC)
What happened in 2015: Davie led at halftime but lost, 36-22.
The series: The Titans lead, 21-13, and have won the last four meetings.
History: Davie held the Titans to 40 passing yards and got 180 passing yards from QB Adam Smith in a 23-17 road win in 2011. The Titans have ruled the series since then.
Notable: West Forsyth defensive end K.J. Henry, who has been offered by Alabama, Clemson and UNC, among others, is the son of Catawba defensive coordinator Keith Henry.
Outlook: Both teams may be among the state’s best 20. Davie has lost only to top-ranked Dudley, while West Forsyth has lost only to powerhouse East Forsyth.
Pick: West Forsyth 24, Davie 21