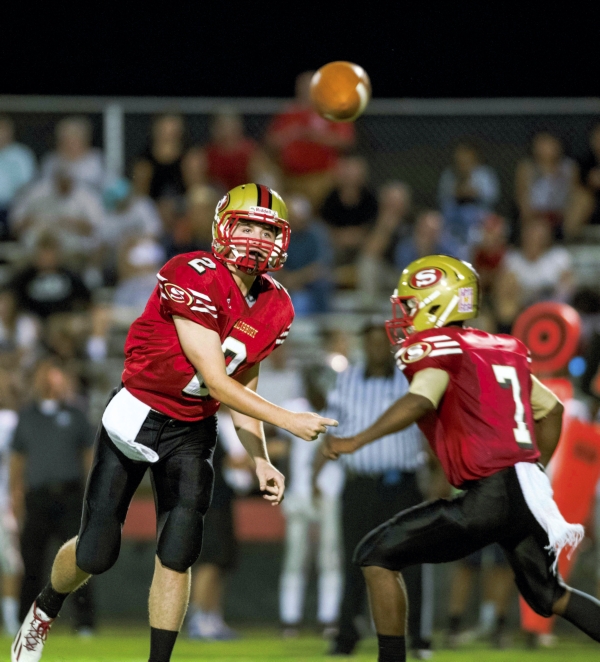 THOMASVILLE – It’s official. East Davidson has surpassed what it did on the gridiron in 2015 – and there is still plenty of football left to be played.

It wasn’t highlight-reel stuff. But it was effective.

East basically ran over Salisbury with a powerful ground attack and played lockdown defense for over a half in a methodical 24-14 win in their Central Carolina Conference game.

East built a 24-0 lead before Salisbury made it closer in the end.

The Eagles set up two of their scores on a blocked punt and onside kick, stuff that made Salisbury coach Ryan Crowder wince.

The Eagles used up five minutes of clock after receiving the opening kickoff and took the lead on Austin McIntire’s 20-yard field goal.

They drove 69 yards in 10 plays on their next drive, with Shewcow scoring on a 3-yard for a 10-0 lead on the first play of the second quarter.

After the East defense forced another three-and-out, Taylor Durham blocked Will Taylor’s punt and recovered it at the Salisbury 7.

On the next play, Tobin kept it on the read option and scored for a 17-0 lead.

While the Hornets could next to nothing on offense, they did get a couple of opportunities thanks to special teams and defense.

Tyvion Wood returned a kickoff 59 yards to the East 31 following Tobin’s touchdown. A holding penalty during the return set the Hornets back to the 38 and they were stuffed on yet another three-and-out.

Shewcow fumbled at the end of a 17-yard gain on East’s next possession and Salisbury’s Byron Goodlett recovered at the Hornet 47.

The Hornets did manage to get into the red zone but were set back by a 6-yard loss on a lateral. Quarterback Tyquan Jones hit Cameron Horne for a 16-yard gain to the East 9 but it was fourth-and-20 and East took over on downs.

East surprised Salisbury with an onside kick to start the second half. Coco Jones recovered at the Salisbury 31 and the Eagles pushed ahead for another touchdown with Burchette scoring from the 1, extending the lead to 24-0.

Salisbury finally got on the board when Marcus Corry scored on a 1-yard run with 6:03 left in the third quarter.

With backup quarterback Griffin Myers giving them a spark, the Hornets drove 80 yards in 11 plays. Trell Baker got the touchdown on a 5-yard run as the Hornets cut the lead to 24-14 with 4:48 left in the game.

“We can’t fumble the ball like we did,” Hanner said. “We hadn’t fumbled all year and then we did tonight after two huge runs. We were probably going to get more touchdowns. And we can’t let our foot off the accelerator on defense like we did tonight in the fourth quarter.”

Salisbury had a chance to get closer but Stone Love intercepted Jones’ pass at the goal line with less than a minute left and returned it 69 yards. Part of that return was nullified by a block in the back penalty.

East is at Thomasville next Friday.