The secret to Panthers bus driver’s long safety record: ‘I pray before I move’ 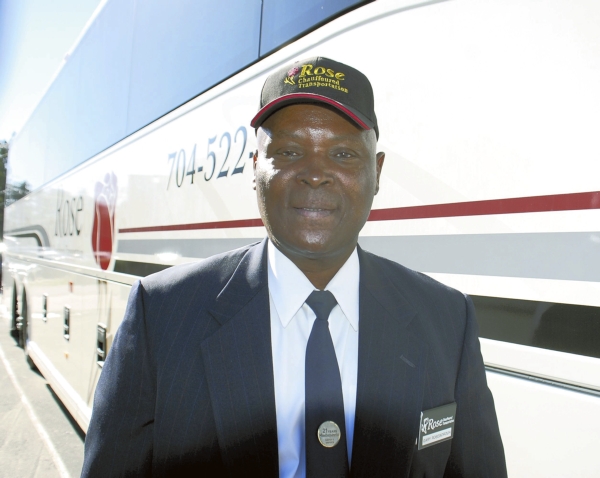 Gary Roseborough in 2014 with a bus for Rose Chauffeured Transportation Ltd., which provides transportation services for the Carolina Panthers. The company will honor Roseborough later this month for his remarkable safety record. File photo by Mark Wineka/Salisbury Post

SALISBURY — Gary Roseborough is still handing out his aluminum crosses.

He is still driving charter buses across the country and into Canada.

And as he has done since the Charlotte Panthers’ inaugural season in 1995, Roseborough is still driving one of the buses taking the team to and from the airport on away games. During home games, he is still transporting Panthers employees to Bank of America Stadium from satellite parking lots off Freedom Drive.

Since he started driving charter buses for Sam Moore in Salisbury in 1973, Roseborough has now logged more than 7.3 million miles without an accident or ticket. That counts all the bus and tractor-trailer miles he has driven over 43 years.

Roseborough, who will be 64 next week, credits one thing for keeping himself and passengers safe all these years.

Several years ago, when he was still making local tractor-trailer runs for West Bros. in Charlotte — in between his charter bus duties — Roseborough made a trip one day to Ingersoll Rand in Mocksville. In a convenience store, he noticed some small aluminum crosses in a basket by the counter that were free for the taking.

Roseborough’s inquiries about the crosses led him to a Mocksville welder named Phil Fuller, who had a stamping machine dedicated solely to the production of the tiny crosses. Fuller made a box full for Roseborough.

“I still carry my pocketful of crosses,” Roseborough says, patting his front pocket. “I give them out everyday as I travel. I don’t hand them to people without a little sermon.”

That sermon often takes the form of  a piece of paper with a poem explaining why he carries a cross in his pocket — or in Roseborough’s case, many crosses. Other times, he provides words of inspiration from Mother Teresa.

Plenty of Carolina Panthers and countless passengers on his tour buses have received a cross or two from Roseborough, He also made sure Panthers owner Jerry Richardson had one, too.

The best advice he ever received, Roseborough repeats often, was to sit down, shut up and listen to the word of God.

Whenever he runs out of crosses, Roseborough gets a fresh supply from his friend in Mocksville.

After 13 years, Roseborough has quit driving for West Bros., but he is still driving charter buses to destinations everywhere in the country for Rose Chauffered Transportation, which is owned  by H.A. Thompson.

Roseborough has lived in Charlotte for many years, but he traveled to Salisbury the other day to visit the Post and some old friends, Jesse and Minnie Byrd on West Bank Street.

Roseborough says he started picking cotton in Rowan County when he was 8 and was working on a chicken farm at age 13. He eventually rode his bicycle to Sam Moore’s bus company in Salisbury and offered to pick up trash and cigarette butts as a way of  getting his foot in the door.

Moore eventually gave the teenager a job washing the buses, and he also was allowed to ride with the drivers. Once he turned 16, Roseborough was moving the buses around on the terminal grounds.

Meanwhile, the Mitchell family of Mitchell & Fair Funeral Home in Salisbury became like a second family for Roseborough, who had a tough home life and quit school in the ninth grade. Starting in 1969, Roseborough helped at the funeral home for decades.

As Roseborough approached his 21st birthday, Moore assisted him in obtaining his commercial driver’s license, and Roseborough drove his first charter bus on Oct. 23, 1973.

Roseborough served three years in the Army from 1975-77. From 1979-1995, he pulled orders and drove a forklift at the Food Lion Distribution Center. As a bus driver, he drove mostly on weekends and on special excursions for Moore, then companies in Kannapolis, Gastonia and Charlotte.

Roseborough thinks when he turns 65, he’ll drive a lot less, but he still wants to perform his transportation duties for the Panthers. He says Panthers quarterback Cam Newton “sits up front with me all the time.”

But he’s always thinking about another passenger in his life.

“To God, I give all the glory,” Roseborough says.