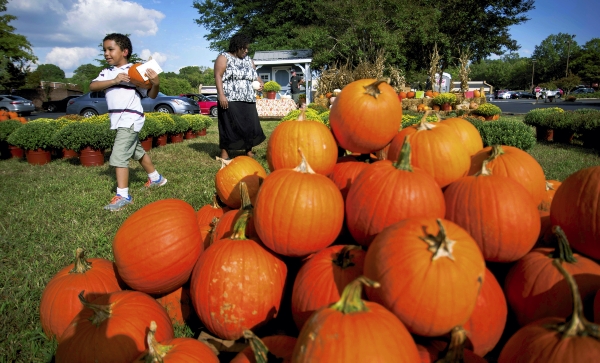 Michael Logan and his mother Shannelle Logan look over the pumpkins at a lot on Jake Alexander Boulevard. Shanelle brought her three children Michael, 7, Sariah, 5, and Thiana, 1, to the roadside pumpkin patch to pick out decorations for their home. Jon C. Lakey/Salisbury Post

You know it’s finally fall when the air gets cooler and the scenery becomes more orange.

In advance Halloween and the rest of Autumn, pumpkin vendors are popping up along frequently traveled roads in and around Salisbury.

River Ridge Tree Farm in Ashe County recently opened a pumpkin sales lot near the Hurley Family YMCA on Jake Alexander. Soon after the pumpkins are sold at the end of October, the same company will bring in its North Carolina-grown Christmas trees to sell into December.