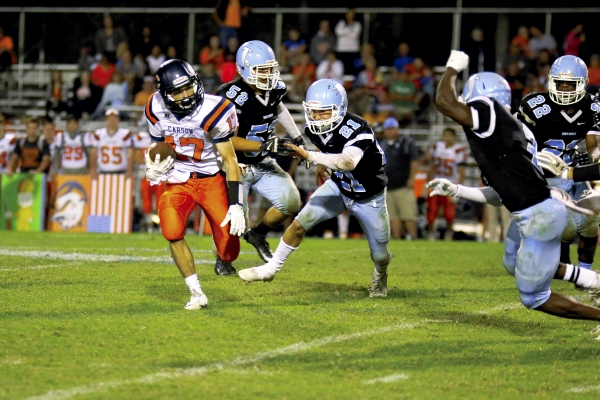 James Sipes/for the Salisbury Post ... Carson’s Clayton Gilmore (17) is surrounded by Falcons during last week’s game at West Rowan. Hunter Brown (21) and L.J. Robinson (22) are among the West defenders. The Falcons won the game, 28-15.

Prep football notebook …
One of the unsung heroes for North Rowan (5-2, 1-0) has been offensive right tackle Terry Cathcart.
“He’s always been a defensive lineman in the past, but we explained to him before this season that he could help this team most on the offensive line,” North coach Ben Hampton said. “He unselfishly changed sides of the ball, and it’s really helped us. We’ve got better size on the offensive line than we had last year.”
Cathcart still plays an occasional series on defense.
The Cavaliers have to be creative because, while they’re talented, they’re not deep.
Non-stop Steven Thurston continues to play nose guard and also is playing about half the snaps at left guard on offense.
•••
Hampton praised safety Chris Clodfelter and the linebackers after a 20-14 win at Lexington opened CCC play.
“Lexington is a very talented team, but our linebackers did a very good job of attacking,” Hampton said. “They were getting downhill.”
•••
Penalties are Hampton’s biggest concern.
“We had eight 15-yard penalties against Lexington, and that can’t continue if we expect to win ballgames,” he said.
•••
When defensive coordinator Josh Sophia was tossed from Friday’s game, the second flag on the North sideline also meant that Hampton had to leave the field.
As of Tuesday, Hampton still wasn’t sure about his status for North’s next contest. North is open this week before resuming CCC play against West Davidson.
With Hampton and Sophia both gone for the final minutes against Lexington, defensive backs coach Rodney Goodine, the former Catawba All-American, and offensive assistant Patrick Hampton, Ben’s younger brother, were in charge.

West Rowan
West’s defense shut out Carson until the fourth quarter of a 28-15 victory that put the Falcons on top of the South Piedmont Conference standings.
West had its best game of the season as far as creating turnovers. Those five turnovers included cornerback Deyquan Byrd’s county-leading fifth interception.
•••
West moved to the top of the SPC with a lot of help from Central Cabarrus, which stunned Concord.
Central Cabarrus visits Mount Ulla on Friday.
•••
West (5-1, 4-0 SPC) welcomed back Martavio Rankin from a knee injury and he contributed 10 carries for 31 yards and a touchdown.
He helped keep Jovon Quarles fresh, and Quarles turned in a career game with 202 rushing yards. It was the first 200-yard game for a Falcon since Harrison Baucom trampled Davie for 241 yards early in the 2014 season.
•••
With free safety Malcolm Ingram sidelined by a knee injury, West used receivers Kortez Weeks and Kameron Caldwell on defense.
Weeks scooped up a fumble and took it for a touchdown, but the TD was erased by an illegal block during his return.
•••
West coach Joe Nixon believes linebacker L.J. Robinson is playing as well as any defensive player in the county, and he’s probably right. Robinson not only makes the defensive calls for the Falcons, he continues to pile up tackles for loss and make big hits.
Robinson and Carson cornerback Brenden Westbrook have a friendly rivalry and they chatted after the game. They were teammates not only at Southeast Middle School but in YFL.
•••
Payne Stolsworth has the county’s top receiver in Weeks to throw to, and he’s been very efficient. In four games as a starter, Stolsworth has nine touchdown passes (seven to Weeks) and the Falcons have minimized turnovers.

Carson
Quarterback Owen White had the second-best rushing game of his career in a 28-15 loss to West Rowan and has become the county’s top rushing QB. White had 77 net yards on 17 carries. Take away several sacks, and he would’ve been right at 100 yards.
White rushed for 99 yards in a recent win against East Rowan and has 190 rushing yards in the last three weeks.
•••
Carson (3-3, 2-2 SPC) executed on coach Joe Pinyan’s favorite trick play — he calls it the hitch-and-pitch — although most refer to it as the hook-and-lateral or hook-and-ladder.
The play netted 29 yards and a first down and could’ve been a momentum-changer, but it was followed almost immediately by one of Carson’s five turnovers.
•••
Spur Luis Cipres’ TD on the last play of the game was Carson’s third defensive TD of the season. Westbook has the other two.
•••
Deven Youker, who began the season as Carson’s starting quarterback before moving to receiver, made a spectacular, diving catch in the end zone for his first varsity TD.
•••
Carson entered the West game averaging 154.6 yards per game on the ground and managed to punch out 154 against the Falcons.

South Rowan
South’s last win on the field was on Nov. 7, 2014.
The Raiders (0-6, 0-4) lost to Cox Mill, 34-6, on Friday, their 17th straight loss on the field. Officially, they are 1-16 in that span because Salisbury forfeited a victory but it’s been a while since the Raiders have had a reason to celebrate.
•••
South had some positives against the Chargers. Austin Chrismon had his best passing game of the season with 105 yards, including a 28-yard completion to Koby Campbell.
•••
While Cox Mill stopped Chrismon from running the ball (15 carries, 2 yards), Sayquan Anthony was able to plow for 100 yards on 19 carries. It was Anthony’s second 100-yard game of the season and his first since opening night against Salisbury.
Mark Austin also had success on the ground. He broke a 32-yard play and totaled 55 rushing yards.
•••
Cornerback Grayson Bell made his second interception, and lineman Thomas Borkowski had a fumble recovery.
•••
South limited Cox Mill to 48 passing yards but allowed 200-plus rushing yards for the fourth time in six outings.

East Rowan
Senior Max Wall has topped 100 rushing yards in five straight games and now has 13 100-yard games in his career. He’s surpassed 200 yards three times.
In Friday’s 33-13 loss to Hickory Ridge, Wall had 165 rushing yards, marking the third straight season he’s run for 100-plus against the Ragin’ Bulls.
Wall, who has produced 41 career TDs, has 971 rushing yards this season, including 670 in his last three outings.
East (2-4, 1-3 SPC) hosts Northwest Cabarrus on Friday, and that’s another SPC school that Wall has enjoyed great success against. He had 241 rushing yards in only 11 carries against the Trojans in 2015.
•••
Justin Smith threw his first TD pass of the season against Hickory Ridge, and Sam Wall, Max’s brother, got his first TD catch.
•••
Special teams terror Wesley Porter has done a lot of damage on returns this season, and he blocked a field goal and a PAT on Friday.
A cornerback, Porter also has been a big part of a pass defense that has allowed only 65, 14 and 29 aerial yards in its last three games.

Salisbury
The Hornets are in the throes of a five-game losing streak, but their open week comes at an optimum time and gives them a chance to regroup for the start of Central Carolina Conference play.
Salisbury hasn’t scored more than 14 points in any of those five losses, and turnovers have put the defense in some tough situations.
Salisbury returns to action next week at East Davidson.

Davie
Davie was 3-4 at this point last season, but now is 6-1 after whipping Reagan, 39-7.
Davie is 2-0 in the Central Piedmont Conference for the first time in Devore Holman’s four-year coaching tenure. Davie was 15-20 in Holman’s first three seasons.
•••
Davie’s fast start is being noticed. Davie was ranked 23rd in 4A by ratings guru Brian Simmons going into the Reagan game and should move up when those rankings are updated later this week.
Davie is currently ranked ninth in the state by MaxPreps, and Davie is receiving some support in the 4A AP Poll. Davie is 13th this week.
Davie, which has won four in a row since a loss to top-ranked Greensboro Dudley, can make a good case for being ranked. Davie beat West Rowan (5-1), 41-0. Davie also owns a win against Greensboro Page (5-1), which is ranked sixth by MaxPreps.
•••
Of course, much of the work for the War Eagles is still ahead. Davie takes on West Forsyth and North Davidson in its next two games, and Davie hasn’t beaten either of those schools since 2011.

A.L. Brown
A.L. Brown’s 24-21 win over Vance, a ranked, undefeated team, was one of the bigger wins of coach Mike Newsome’s six seasons in Kannapolis.
It also was his 50th victory at the helm of the Wonders (5-1, 2-0 MECKA)), bringing his record to 50-21.
Newsome is fifth on the school’s all-time wins list.
Bruce Hardin (122-24), Ron Massey (120-31) and Bob Boswell (102-37-1) lead the list. In fourth place, is Ed Edmiston (64-32-13). Edmiston coached in the 1950s and early 1960s after a stellar football career as a Catawba lineman.
•••
A.L. Brown received votes in the AP 4A poll this week — although fewer votes than Vance, which fell to 11th place, received.
•••
Zach Williamson, a senior who took over quarterback duties on opening night due to an injury, has done more than anyone could’ve expected. Williamson threw his sixth and seventh TD passes against Vance, and he’s tossed only two interceptions.
Defensive star Sherard Sutton caught those two TD passes against Vance for his first two scores of the season.
Tyrek Cagle scored the Wonders’ lone rushing TD. It was his second of the season.