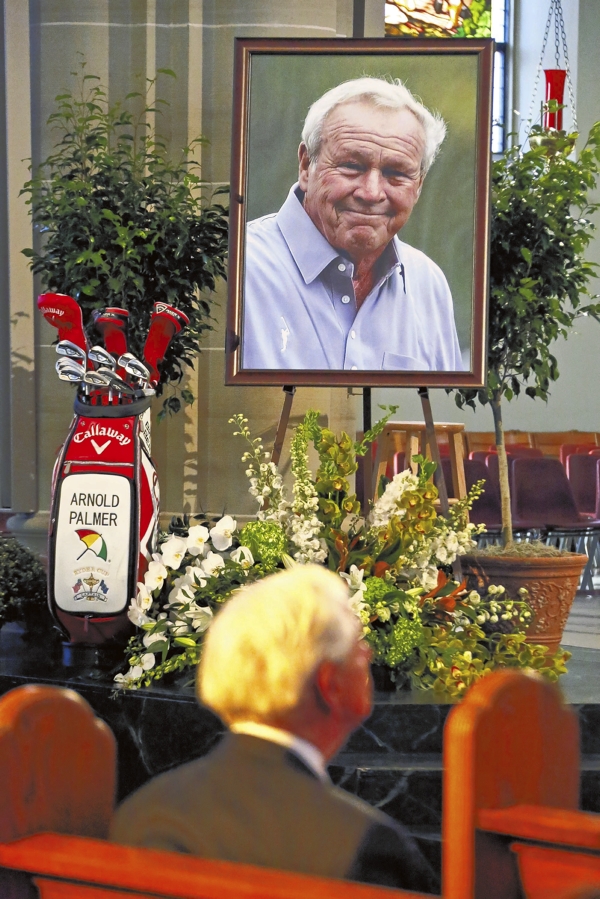 AP Photo/Gene J. Puskar... A set of golf clubs and a photo of golfing legend Arnold Palmer sit in the Basilica at Saint Vincent College in Latrobe, Pa., for Tuesday’s memorial service. Palmer died on Sept. 25 in Pittsburgh at the age of 87, as he was preparing for heart surgery.

LATROBE, Pa. (AP) — A farewell to the King turned somber when Jack Nicklaus, his voice cracking as a large tear formed in his left eye, urged the elite and the everyman to remember how Arnold Palmer touched their lives and “please don’t forget why.”

“I hurt like you hurt,” Nicklaus said. “You don’t lose a friend of 60 years and don’t feel an enormous loss.”

The service Tuesday at Saint Vincent College in Palmer’s hometown was filled with just as much laughter and warmth from stories of the most significant figure in modern golf. Nearly 1,000 golf dignitaries from around the world, referred to by former LPGA Commissioner Charlie Mechem as the “elite battalion of Arnie’s Army,” crammed into the basilica.

Some 4,000 others headed to remote sites across the college to watch. Long lines of traffic formed two hours before the service began.

Palmer died Sept. 25 in Pittsburgh at age 87 as he was preparing for heart surgery. His family had a private funeral Thursday and asked that a public service be held after the Ryder Cup so no one would be left out.

“We were looking down at the air strip and the fog just suddenly lifted,” Ernie Els said after landing in one of several private jets that descended on Arnold Palmer Regional Airport in Latrobe. “This is a beautiful day. We’ve all met different people in life. He was a man who didn’t change. It didn’t matter if you cut the grass or you were a president. He was the same with everybody. He was just … he was the man.”

Palmer won 62 times on the PGA Tour, including seven major championships. He inspired the modern version of the Grand Slam by going over to the British Open and making it important in the eyes of Americans again. He was a captain twice in the Ryder Cup, and the gold trophy the Americans won Sunday at Hazeltine sat on a table for guests to see as they took their seats.

But this service was more about the lives Palmer touched than the tournaments he won.

In the large portrait at the front of the stage, Palmer wasn’t holding a golf club or a trophy. It was just the King and that insouciant grin that made everyone feel like they were friends, even if they had never met.

“Have there been better golfers? Perhaps, but not many. Has anyone done more for the game? No one has come even close,” former R&A chief Peter Dawson said. “Is there a finer human being? I haven’t met one yet.”

Ryder Cup captain Davis Love III, Phil Mickelson and a few other members of the U.S. team were there. So was the generation before them, Tom Watson and Curtis Strange, Lee Trevino and Mark O’Meara. Dozens of others were there, along with the heads of every major golf organization. All of them alternately smiled and wiped away the occasional tear.

PGA Tour Commissioner Tim Finchem said he had known Palmer since 1957 — Finchem was 10 that year — because “when you saw him play, it was the same thing as meeting him.” He said Palmer brought so many people to golf because of his attacking style, his television appeal and how he carried himself.

“He had this other thing,” Finchem said. “It was the incredible ability to make you feel good — not just about him, but about yourself. I was amazed by how people reacted to him. He took energy from that and turned right around and gave it back.”

Mechem, the former LPGA commissioner who became one of Palmer’s closest advisers, set the tone for the service by asking the crowd to remember the image of Palmer walking up the 18th fairway, hitching up his pants and giving a thumbs-up. Still, a touch of sadness was inevitable.

“There’s an old saying that there are no irreplaceable people,” Mechem said, his voice cracking toward the end of the ceremony. “Whoever made that line didn’t know Arnold Palmer. There will never be another.”

Among the more poignant tributes was Palmer’s grandson, Sam Saunders, who plays on the PGA Tour.

“There wasn’t a big difference between the man you saw on TV and the man we knew at home,” Saunders said.

Saunders grew up calling him “Dumpy” because that’s what his older sister said when trying to call him “Grumpy.” The name stuck. That’s how Saunders had Palmer listed in his phone, and he used that number more times than he could remember.

The last call was a week ago Sunday at 4:10 p.m., shortly before Palmer died.

“He answered on the first ring. He was in the hospital preparing for surgery the next morning,” Saunders said. “He told me to take care of my babies, my entire family. I intend to do that and make him proud. I told him I loved him. He told me he loved me back. That was the last thing we said to each other, and I will cherish that the rest of my life. And I’ll take the best piece of advice he gave me, to talk less and listen more.”

Palmer’s co-pilot, Pete Luster, flew Palmer’s plane over Saint Vincent College for nearly an hour before the service. The crowd gathered outside the basilica when it was over to watch Luster fly overhead and tip the wing.

He made one more pass in the plane — tail number N1AP — and then soared upward until it disappeared behind a large, white cloud.

“He was the king of our sport,” Nicklaus said. “And he always will be.”