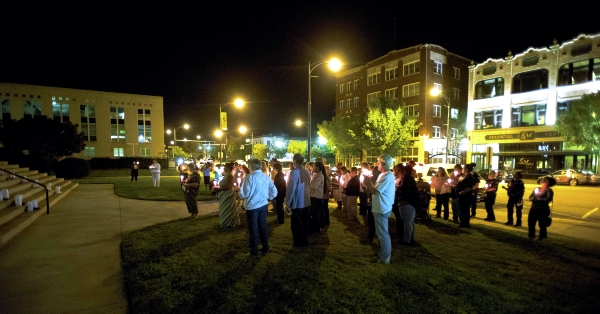 SALISBURY — Carrie Walters was independent, had a job and paid all of the household bills. She was a young mother of two daughters. She “didn’t look like a victim of domestic violence,” but she regularly was hit in the back of the head and punched in the stomach while pregnant.

Walters, now a local attorney, shared her story of survival Tuesday night during the Family Crisis Council’s domestic violence candlelight vigil. The vigil was held on the steps of the Rowan County Courthouse.

Her first instance of abuse was at the age of 17 after the birth of her oldest daughter. She had a gun held to her head. Each time she was physically abused, Walters said, she was made to feel as though it was her fault.

She tried to leave several times, but left for good when she found the courage after asking her daughter if she missed her father. Her daughter said she didn’t miss her father if it meant he would hit her again.

Walters is happily married now, her daughters are both in college and she has a 10-month-old grandchild.

She said she’s not ashamed, but is a survivor of domestic violence.

There were so many people who tried to get Walters to leave her abuser by telling her how independent she was, Walters said.

She said others looking in from the outside believed she couldn’t have been a victim of domestic violence because she seemed so strong and independent.

Walters encourages outsiders to not judge, but to show support for women and men who are victims of domestic violence.

In 2015, 86 women and 112 children received help through the battered women’s shelter. There were 760 calls through the agency’s family crisis 24-hour hotline. Also in 2015, the Family Crisis Council served 2,787 individual clients.

It took nearly 15 years for Rowan County resident Chariel Dye to become comfortable in her own skin and exude confidence. She was beaten physically and emotionally for the six years she was married. Her ex-husband drank a lot, and the first time he was violent with her, she was taken aback.

Her husband would apologize, buy her expensive handbags, shoes and other gifts. She’d forgive him, but the cycle would continue.

She never witnessed domestic abuse growing up, and when her mother became ill, Dye decided she couldn’t continue.

Emotionally she was depleted. She gave her husband “another chance” for the sake of her marriage.

“I began to fight back physically because I couldn’t fight back emotionally,” Dye said.

She got out of the marriage and 15 years later is finally in a place where she’s happy and confident.

As the sun set and the darkness fell, all of those gathered on the lawn lit their candles, held in purple cups. The purple lights bounced off the darkness, and a bell lightly rang out with chimes to honor the 60 people who’ve died in 27 North Carolina counties at the hands of domestic situations in the past year.

In Rowan County, there was one domestic violence related death, and it was also the first murder of the year in the city. Talisha Crowder was a Pfeiffer University pre-med student who was shot and killed by ex-boyfriend Brandon Jarron Hawkins.

Hawkins remains in the Rowan County jail without bond.

“Sometimes we are not there to decide when it’s time,” Deal said of the decision for a victim to leave.

He said law enforcement rely on partners like the Family Crisis Council and the Rowan District Attorney’s Office to provide a helping hand to victims. Deal said it is his hope that victims find the courage to see another day and escape the violence.

The Rev. Patrick Jones prayed not only for the victims of domestic violence and the children who witness abuse, but for the abusers who may be thinking of punching or kicking their wife, girlfriend or significant other. He prayed that the abusers would think twice and the victims would have the courage to ask for help to get away.