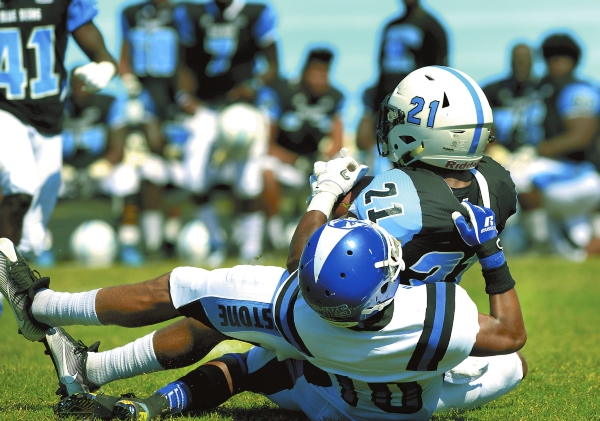 Wayne Hinshaw/for the Salisbury Post ... Livingstone cornerback Gregory Hines (21) has both of his team’s interceptions this season. Above, Hines picks this pass in front of Chowan’s Kaine Lombard (10) during a game on Sept. 24.

Not just the back ailment that he is dealing with this week, but the “growing pains” his team is suffering through is hurting the fourth-year coach even more.

The Blue Bears are a young team, especially in the crucial positions of quarterback and offensive line. Williams hopes that the team grows up a little faster as it moves into the second half of the season.

Livingstone stands at 1-4 and 0-2 in the CIAA. Both of those conference losses were to teams in the Northern Division (Chowan and Virginia State) and now the Blue Bears get to play in their own Southern Division. The first test is at home Saturday against St. Augustine’s at 1 p.m.

“We’ve run into two buzz saws in Chowan and Virginia State,” said Williams yesterday. “Both of those teams have some older guys and some very good players. And we’ve been having a little stage fright.”

Williams said that his team has been practicing well and appears ready for action, but when the games start, it’s been a different story.

“We’re looking forward to this weekend to start playing our division teams,” said Williams. “That’s where we made our run last year and we’re looking to do the same thing.”

Last Saturday at Virginia State, the Blue Bears could not have gotten off to a worse start.

The Blue Bears had decent starting field position at their own 28-yard line, but the first series as a disaster.

Longerbeam was sacked on each down and on the last one, he fumbled and the Trojans returned the ball to the Livingstone 1-yard line.

So the Livingstone defensive players’ first action came with their feet in the end zone. A running play later and it’s 7-0 Virginia State.

Longerbeam did complete two passes on the next drive but Williams pulled him for backup QB Thaddeus Bell.

“He (Longerbeam) is still most likely the starter,” said Williams. “He was just making some fundamental mistakes and was watching the rush rather than keeping his eyes downfield. Sometimes, you can learn more by watching from the sideline. He’ll be ready to go on Saturday.”

Longerbeam still has an efficiency rating of 115.8 in his two games and has completed 62 percent of his passes with no interceptions.  He has lost two fumbles. Bell has played in four of the five games but has thrown a team-high six interceptions.

Livingstone won at St. Augustine’s last season (31-7), the start of a stretch that saw the Blue Bears win four of five games against the Southern Division.

“We’re looking forward to the challenge of playing St. Augustine’s,” said Williams. “They’re much improved from last year and have a couple of transfer receivers that we’ll need to keep in front of us. But we’ve talked about just relaxing and playing football. Be sound on both sides of the ball.”

Williams expects Green and Odomes to be back this week to help the offense and believes the defense will continue its good work.

“Even in the loss last week, the defense was still pretty consistent,” added Williams. “That group just kept getting put into bad situations because of all the mistakes on offense.”

Overall, Livingstone has 18 turnovers, ranking it among the worst in NCAA II, a category no team wants to lead. The Blue Bears have only six takeaways on defense — four fumble recoveries and two interceptions, both by cornerback Gregory Hines.

Junior running back Jarius Richardson continues to lead the ground attack for Livingstone with 69 yards per game. Sophomore wide out Everette Ransom still leads the receivers with 30 catches for 400 yards.