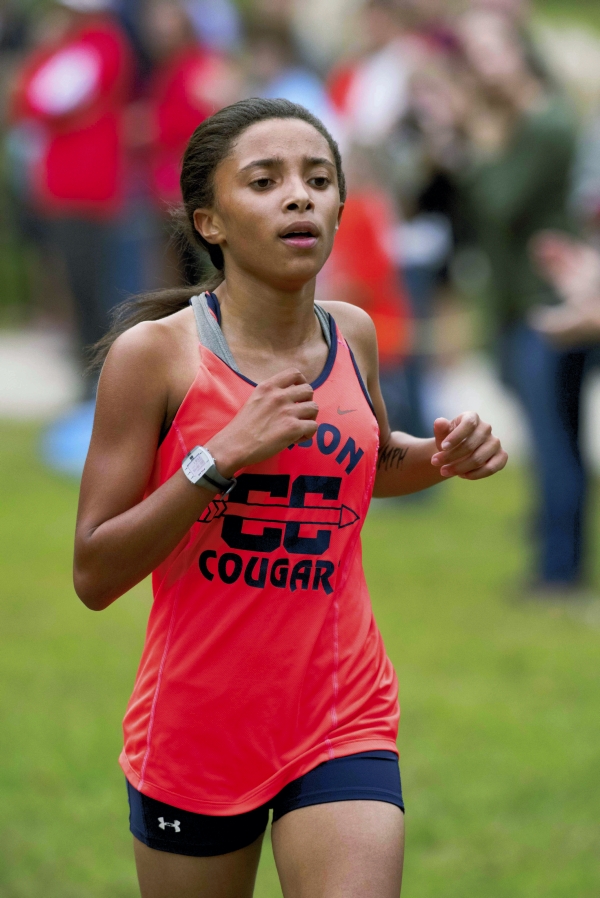 SALISBURY — Salisbury’s girls won the Rowan County Cross Country Championships on Wednesday for the first time since 2010, and no one really saw it coming.
Not even coach Sallie Hundley Pittman.
“I really didn’t know that we had a chance to win today, but then we started counting it all up, and we realized we did,” Pittman said with a laugh. “Girls ran great times. We had a great day.”
The final tally: Salisbury 44, defending champion Carson 45.
It was so close that it came down to Salisbury’s sixth runner — freshman Anna Grace Woolly. While only the top five runners count toward a team’s score, the sixth (and seventh) runners on a team can affect the scores of the other squads. And so it was with Woolly. She finished 18th, and by finishing ahead of Carson’s fifth-best runner, she decided the county championship.
Carson had claimed the last two team titles at Dan Nicholas Park. The Cougars also had won the Pre-County Meet in August.
Carson junior Taylor Wiggins stormed across the finish line in 19:49 to take the individual championship. When another orange Carson jersey, this one worn by freshman Taylor Conrad, breezed across the line for second place in 20:20, a three-peat for the Cougars seemed like a sure thing.
But three white-jerseyed Hornets also quietly finished near the top. Freshman Leah Cressler was fourth, sophomore Ellen Simons was fifth, and junior Mary Kaufmann was sixth.
Carson’s third runner, Jessie Nichols, another member of the Cougars’ strong junior class, was eighth.
After that, a lot of events came together for a Salisbury victory.
Julia Honeycutt, the county’s soccer player of the year last spring, is involved heavily in travel soccer. That prompted her to switch fall sports from tennis to cross country because the time demands of cross country weren’t as great. Honeycutt, Salisbury’s fourth runner, placed 13th. Without her, Salisbury wouldn’t have won.
Grace Williams, a cheerleader who decided to run cross country, was the Hornets’ fifth finisher. She was 16th, and the Hornets wouldn’t have won without her, either.
Kaufmann and Simons are the constants. They were the heart of the program last season.
“We got more serious about running and ran a whole lot over the summer,” Kaufmann said. “We knew we might have a strong team this year because we knew how good Leah Cressler was going to be. Then Julia and Grace Williams came out, and Bess Bryan (who ran despite a hip injury and finished 24th) moved back to Salisbury. Almost everyone on the team ran a P.R. today. It’s a great feeling.”
Kaufmann, who ran 23:04 in the county meet last year, was clocked in 21:38 this time. Simons improved from 22:45 to 21:10.
While Salisbury grabbed the team title, Wiggins, a tiny, big-hearted junior who finished third in the 2015 championships, topped the field. She said she was focused not on winning the individual championship, but on breaking 20 minutes.
She beat 20 minutes by 11 seconds, and the county championship came along for the ride.
“I told myself that if I couldn’t get that sub-20, then I’d been wasting my time running all those miles,” Wiggins said. “That made the work worthwhile.”
East Rowan freshman Adalie Harrison, who won the Pre-County Meet in August, sprained an ankle three weeks ago at Statesville. That set back her training, but she was determined to compete and finished third in 20:34. She led East, which is still competing without injured senior standout Faith Faller, to a third-place finish.
Harrison led on the straight-away start and still was setting the pace as runners headed into the forest.
“I knew I had to pick it up to get that sub-20 and I finally passed Adalie about halfway through the race, at the duck pond,” Wiggins said.
Senior Graysen Evans led West Rowan to a fourth-place finish with a seventh-place effort. West’s Rustyn Orbison, a sophomore, was 10th.
South Rowan freshman Madison McGuire took ninth place and led the Raiders to fifth place. Sophomore Madison Lowery was 12th.
East’s second and third runners were junior Shalea Vanhoose (11th) and sophomore Grace Faller (14th).
Carson’s fourth and fifth scorers were junior Onnah Houghton (15th) and Grace Curlee (20th).
North Rowan didn’t record a team score, but Ashley Lore (19th) led the Cavaliers.
Conference meets for all the Rowan schools are coming up on Oct. 18.