In Charlotte, Michelle Obama says we can’t afford to squander the presidency 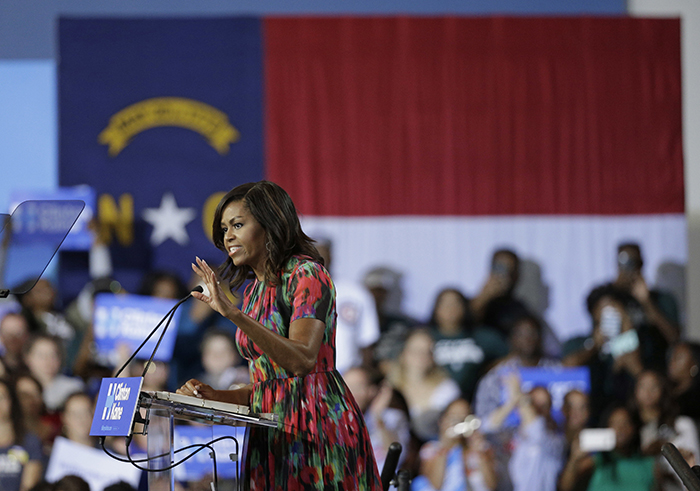 CHARLOTTE — In a campaign speech at the city’s convention center, first lady Michelle Obama outlined the stakes of the 2016 presidential election.

“See, at that point they’re the leader of the world’s largest economy, the commander in chief of the most powerful military force on earth,” she said. “With every word they utter, they can start wars, crash markets, fundamentally change the course of our planet.”

America needs a president who cares about families, is compassionate and doesn’t rely on phrases like “law and order,” Obama said. From mocking someone with disabilities to tweeting questionable things at 3 a.m., Obama had ample criticism of Clinton’s competition.

“We cannot afford to squander this opportunity given the alternative,” she said.

She said experience, preparation and temperament matter. Clinton has all three, Obama said.

“Hillary is one of the few people on this entire planet who has any idea what this job entails,” she said. “And yes, she just happens to be a woman.”

Obama’s speech drew a large, raucous crowd. The 2,000 or more people gathered Tuesday included Charlotte residents Trina and Roger Boyd, who were attending their first political rally. The pair said they decided on their favorite presidential candidate months ago. Registered Democrats, both say Clinton’s party affiliation is one reason they like her.

Trina Boyd said she likes Clinton because of her policy positions related to children. Roger Boyd’s reasoning is, perhaps, a bit simpler.

“I would choose her over Trump any day of the week,” he said.

Every vote matters, Obama said Tuesday. She specifically referenced the 2008 and 2012 presidential elections as examples of small numbers of votes having a significant effect. In 2008, just a couple votes in each precinct could have changed the outcome of North Carolina’s race. In 2012, it was larger but still close, she said.

“Elections are not just about who votes but who doesn’t,” Obama said.

She chastised any voters contemplating voting for a third-party candidate or staying home out of frustration. A vote for Libertarian candidate Gary Johnson or Green Party candidate Jill Stein would help Trump, Obama said.

In an emailed statement before the event, Republicans characterized it as an attempt to generate enthusiasm among people who haven’t decided on their favorite presidential candidate.

“With 35 days left until the election, Hillary Clinton is still struggling to appeal to voters from the coveted Obama coalition who remain unenthusiastic about her candidacy,” said Republican National Committee spokeswoman Kara Carter. “Unfortunately for the Clinton campaign, sending celebrities and now Michelle Obama to North Carolina only highlights the fact that she’s failed to inspire enthusiasm from the young voters she desperately needs to turn out come November 8th.”

Tuesday’s speech was more than a simple campaign stop for Obama, who said she has become inspired by Clinton’s persistence, consistency and life-long record of service.

“I am here because I care about this country,” she said.