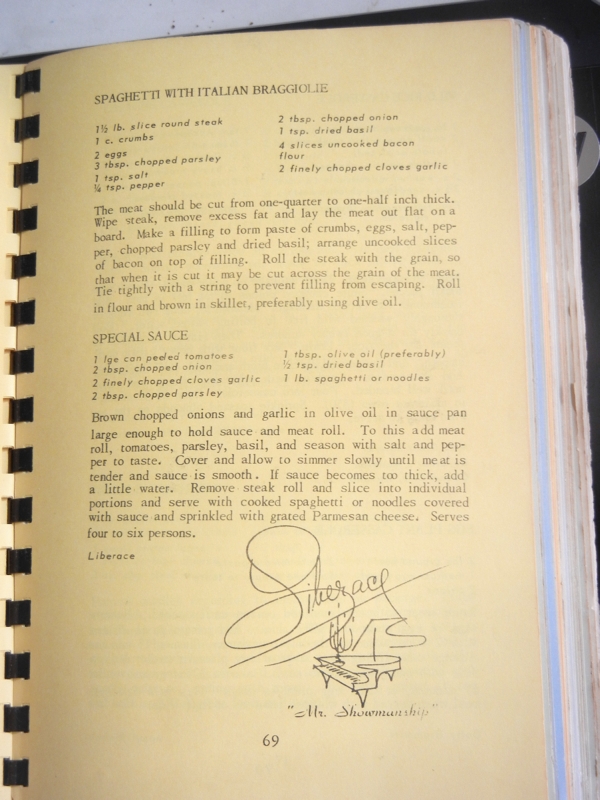 Brenda Zimmerman/For the Salisbury Post Flamboyant piano virtuoso Liberace provided an Italian-inspired dish for a celebrity cookbook published by a church in the 1960s.

SALISBURY — In today’s world, getting a recipe from a famous person is as easy as using the search engine on a laptop. What does Oprah recommend for a perfect hors d’oeuvre? How would Martha Stewart prepare a vinaigrette dressing? What is Michael Jordan’s favorite menu for guests?

What did President and Michelle Obama server at the last State Dinner? These sorts of juicy details can be discovered at the click of a button.

In 1962, before such vaults of knowledge were literally at our fingertips, a group in Quincy, Mass., decided to put together a celebrity cookbook. Printed in 1964 by the Houghs Neck Congregation Church, it was a fundraiser for the Scholarship Board.

The earliest dated letters included start in September 1962 when Gloria Brummill and the Rev. Alicia Corea and the various others who were assigned as “solicitors” began getting responses.

Several personal letters are reproduced in the battered spiral-bound book. Can you just imagine the excitement of these women finding the return address of Joyce Brothers or Eleanor Roosevelt on an envelope in the day’s mail?

Notes and letters are included from Jimmy Durante, Loretta Young and Jacqueline Kennedy. Two letters from England were printed that sent the regrets of Queen Elizabeth and Lady Churchill. Both stated in so many words that they could not possibly honor all such requests that came their way and wished the group success on their endeavor. My way of thinking is that if they had time to have the secretary send the note, they could have slipped in a recipe.

In many instances, the spouse of the celebrity took the responsibility of responding. Kathryn Crosby, wife of Bing Crosby, and Muriel Humphrey, wife of Hubert Humphrey, were two. Abigal Van Buren of Dear Abby fame sent in two recipes. Liberace and Lawrence Welk replied positively.  More than 30 well known and highly regarded celebrities of the day participated. In addition, nearly 30 presiding U.S. governors, as well as many senators and other political figures responded with recipes.

Alfred Hitchcock was fond of Quiche Lorriane. LBJ and Lady Bird sent nothing less than a genuine Texas chili recipe named for the Pedernales River. Muriel Humphrey was quick to note that her Beef Stew was what sustained the senator’s “vim, vigor and vitality.”  Rose Kennedy submitted the recipe for her famous Boston Cream Pie. Often the recipes on shown on official letterhead.

One recipe that lacked an appetizing beckon to taste was the Eggplant Puree submitted by the wife of the Honorable Henry Cabot Lodge. Put that on the same list as the Toasted Bacon and Mashed Banana Sandwich. I think the most humorous one is the Mock Chicken Pie. It is a “mock chicken” pie because what lies beneath the delicate pastry is canned tuna.

Recipes from the congregation of the church also fill the pages. It is divided into sections such as Breads, Desserts, Sunday Night Dinners and One Dish Meals. Advertisement pages include phone numbers that start with two letters of the alphabet followed by four numbers.

Standard equivalency charts for measurements are included, as well as a table to show how many pounds of turkey, how many pies or how many gallons of coffee are needed to feed 100.

Throughout the book, the gaps at the ends of the pages are filled with household hints such as comforting a puppy by putting a wind-up clock in its bed.

Did you know you can get the wrinkles your of your Sunday veiled hat by laying it between sheets of wax paper and pressing it lightly with an iron?

A slice of raw potato placed on a burn will take the heat out of it. Set a mixing bowl on a folded damp towel will keep it from slipping on the counter while you are working.

As with any cookbook, much of the fun is in the reading.  Over the years terminology has changed: hamburg instead of hamburger; double cream instead of heavy whipping cream; suchinni instead of zuchinni; Fluffo instead of Crisco. Fluffo does have a certain ring to it regarding current trends toward the use of fats.

The following is chosen because as a child I always had a homemade Devil’s Food Cake with Seven Minute Maple Frosting as a birthday cake.  My mother had the art of creating the perfect Seven Minute Frosting down to a science.  This is from the kitchen of Mrs. Earl Warren, wife of the Chief Justice.  This is a cake with both a filling and a frosting.

Cream butter and sugars together, add melted chocolate, whip in egg yolks.  Sift together flour, soda, salt three times.  Add to first mixture alternatively with buttermilk until all of both are used. Add vanilla, beat until well mixed.  Bake in 9-inch pans at 350 for about 35 minutes or until done.

Boil all ingredients except vanilla in top of a double boiler.  Beat with an egg beater, over boiling water for seven minutes or until peaks form.  Remove from fire and add vanilla.

• Blend until smooth and add 2

To assemble the cake

Use the 7 Minute Frosting between the layers and the chocolate frosting on the sides and top. Garnish with walnut meats or chopped assorted salted nuts.

One of the more peculiar things in the household hints is a Mothball Centerpiece For Christmas. Not sure that is going to blend well with the holiday aromas. Mix one pint of water, one tablespoon of baking soda, one teaspoon of citric acid crystals OR two teaspoons of liquid citric acid. Add to a fishbowl with a handful of mothballs and a few drops of vegetable coloring.  I may try this just to see what it does!