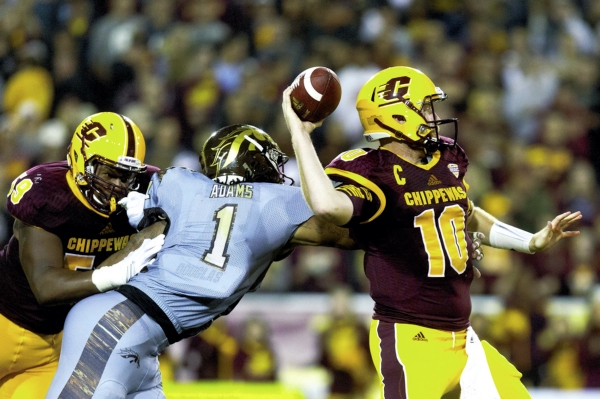 associated press Central Michigan quarterback Cooper Rush (10) attempts to throw as Western Michigan defensive end and former Salisbury High School star Keion Adams (1) gets a hand on him during the first half of a game Saturday in Mount Pleasant, Mich. Adams is currently rated 26th for the 2017 NFL draft.

Area athletes update …
It’s conceivable that another Rowan County athlete could be drafted by the NFL this spring.
Western Michigan defensive end Keion Adams (Salisbury) is 6-foot-2, 245 pounds and has run a 4.68 40-yard dash. He’s currently ranked 26th at his position for the 2017 draft, although there are certain to be some top-notch underclassmen who also make themselves available for the draft.
As a senior, Adams’ on-field production is catching up to his physical ability. He had a fumble recovery and a sack on Saturday in Western Michigan’s romp against Central Michigan.
Adams, 21, led the Broncos in sacks as a junior and has helped Western Michigan climb into the Top 25 in the Coaches Poll for the first time.
Western Michigan (5-0) has beaten Big Ten teams Northwestern and Illinois.
•••
Logan Stoodley (West Rowan) made 12 tackles for Limestone in last week’s loss to Wingate and will be coming to Catawba to play against the Indians this Saturday at 1:30 p.m.
•••
Virginia’s Keeon Johnson (A.L. Brown) had five catches for 46 yards in Saturday’s 34-20 win against Duke. Johnson’ day included a 29-yard reception to convert a third-and-long situation.
•••
Charlotte’s Kalif Phillips (A.L. Brown) had 57 receiving yards and 52 rushing yards in Saturday’s loss to Old Dominion. His day included a 42-yard TD reception.
•••
Hampton freshmen linemen Derrick Moreland (West Rowan) and Keldrick “KJ” Wilson are redshirting this season.
•••
Willie McCree Jr. (East Rowan) made two tackles for Guilford in a 59-0 romp against Catholic.
•••
All-America candidate Brandon Parker (A.L. Brown) continues to shine at offensive tackle for North Carolina A&T, the No. 1-ranked team in HBCU football. Parker had three pancake blocks and graded out at 91 percent in Saturday’s 31-9 win against Hampton.
•••
Kaleel Hollis (A.L. Brown) made five tackles for UNC Pembroke in a loss to Tuskegee. It was the first loss for the Braves. Chris Hassard (West Rowan) continues to start at center for UNC Pembroke.
•••
Georgia’s Marshall Long (South Rowan) averaged 40 yards on five punts in Saturday’s last-second loss to Tennessee. Long’s best kick was 47 yards.
•••
Jamal Lackey (Davie County) had four tackles, including a sack and another tackle for loss, in Saturday’s setback at Newberry.

College tennis
Michael Ogden (Salisbury) started off the season strong for N.C. State with a third-place finish in singles in the Duke James Bonk Classic. Ogden lost in the semifinals and went 3-1.

MLB
Brothers Corey and Kyle Seager (NW Cabarrus) combined for 56 homers this season, five short of the MLB record held by Jason and Jeremy Giambi. Kyle, who hit 30 homers, finished with 99 RBIs, but a late-season slump left him one shy of 100.
The Seagers also combined for 76 doubles. Corey, who had 40 doubles, is certain be to the N.L. Rookie of the Year.
•••
Whit Merrifield (Davie County) batted .283 for the Kansas City Royals and played in 81 games.