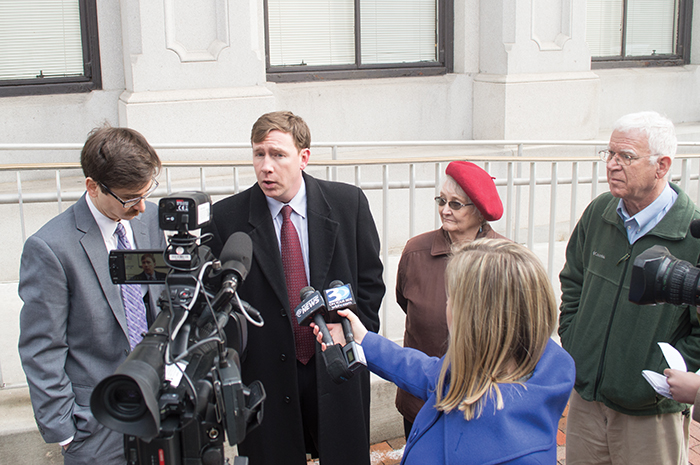 SALISBURY — Rowan County’s prayer lawsuit may not be over yet.

The American Civil Liberties Union, on behalf of three Rowan residents, has formally asked a federal court to reconsider a three-judge panel’s decision that county commissioners’ prayer practices are constitutional.

The ACLU formally submitted its petition for rehearing en banc on Monday. An en banc hearing involves all 15 4th Circuit judges instead of the three-judge panel involved in the Sept. 20 ruling.

“In reversing the district court, the panel majority concluded that Rowan County’s prayer practice comported with the Establishment Clause,” the petition states. “That sweeping decision, which misinterprets and misapplies relevant precedent, has profound consequences for an area of exceptional constitutional importance.”

If the 4th Circuit’s recent decision is allowed to stand, the ACLU argues that it would “wash away all constitutional limitations on legislative prayer practices.”

From 2007 to 2013, county commissioners delivered sectarian prayers — referencing a specific deity — at the start of each meeting. In the prior ruling, the 4th Circuit Court ruled that county commissioners’ prayers fit within the tradition of lawmaker-led prayer, do not coerce or disparage, were created individually rather than by the entire board and were given for the benefit of commissioners rather than the general public.

In its Monday petition, the ACLU specifically argues that the 4th Circuit Court’s decision “erroneously concluded” that lawmaker led prayers are separate from those delivered by outside clergy and that prayers were delivered for the benefit of the public. Rowan County’s prayers do not fit within the longstanding tradition of legislative prayer, the petition states.

In the second of its two-part argument for an en banc review, the ACLU says the entire 4th Circuit should hear Rowan’s case because it’s the first test of Greece vs. Galloway — where the U.S. Supreme Court ruled that volunteer chaplains were permitted to open each legislative session. The fact that Rowan County’s case is the first significant test of the Supreme Court’s 2014 decision is “reason enough to grant en banc review,” the ACLU says.

“The novel nature of this case makes the need for review by the full court all the more pressing,” Monday’s petition states.

When asked, the ACLU on Tuesday declined to comment further about its en banc petition.

County commissioners Chairman Greg Edds said he was notified about the en banc petition soon after it was filed. Edds said he’s not surprised the ACLU has appealed the 4th Circuit Court ruling and will wait to see what the court decides.

University of Richmond law professor Carl Tobias, who has been actively following Rowan’s case, said it’s likely that the 4th Circuit will grant the en banc request “because this is the first case post Town of Greece to reach the appellate level and because of Judge (Harvie) Wilkinson’s strong dissent.”