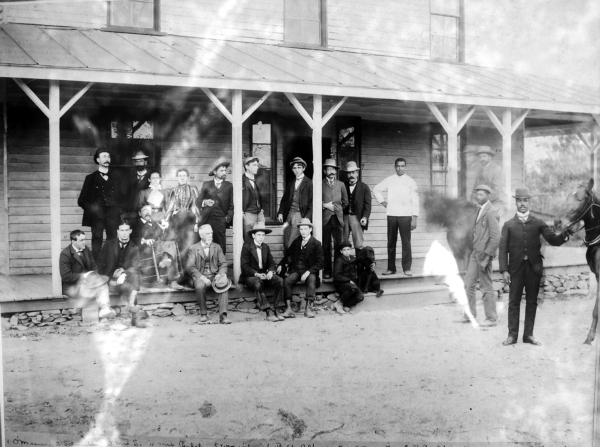 Sherry Welch of Indian Trail shared this photograph with the Post during a recent visit to Gold Hill Founders’ Day. Her great-grandfather, Robert L. Welch, is the man standing with his right shoulder against the third porch post from the left. His right hand is reaching into the other side of his coat. Welch was first a mining engineer then general manager for the Union Copper Mine in Gold Hill. He became general manager in the spring of 1900, succeeding Richard Penhale, who is also in this picture, as is Penhale’s wife. The glare on the photograph is from the glass of its framing. The picture is thought to be from around 1900, probably taken in front of a Gold Hill hotel. The names of people written onto the photo include these notations, in a general left-to-right direction: O’Meara, Schmerber, Mrs. S., Mrs. Penhale, William Wiley, Baldy Caldwell, W.B. Ryder Jr., Robert Laing Welch, Van Dixon, R. Marsh, not legible, Stanly Notch, Strother Newman, Richard Penhale, Clarence Weld and Arv Tucker.