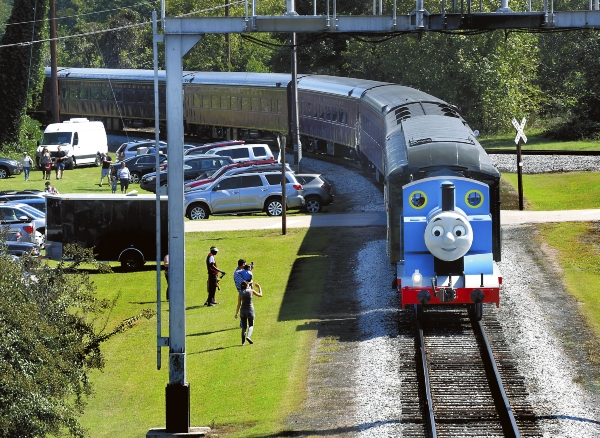 Thomas the Tank Engine pulls into the NC Transportation Museum, one of Rowan's most popular tourism destinations. Wayne Hinshaw / for the Salisbury Post

SPENCER — When 16-year-old Lyric Clayton blows a note on a wooden train whistle, another, louder whistle echoes down the track.

“He whistled back,” he said, all smiles.

Mother Penny Clayton said that Lyric, who has autism, has had a lifelong love of trains.

“We’ve been carrying him to Tweetsie since he was about two,” she said.

The two stand on a wood and metal bridge stretching high over the rails, and watch the familiar face and blue body of Thomas the Tank Engine puff up the track.

“Thomas was the start of me loving trains,” Lyric said.

The Clayton family is from Danville, Va., and Penny said they often go train spotting. But today, they drove down to Spencer, “just for Thomas.”

The family stopped on the bridge to snap pictures on their way out, having already taken a ride around the N.C. Transportation Museum on the famous engine. But hundreds of others were just beginning their adventure.

Sunday was the last day for the Thomas and Friends “Day Out with Thomas” outing hosted by the N.C. Transportation Museum. Museum Public Information Officer Mark Brown estimates that this year’s Day Out event would have had nearly 30,000 guests during its six-day run.

Brown, in part, credits the weather.

“It’s been gorgeous,” he said.

Last year heavy rains kept crowds down, Brown said. But in 2016, the numbers are up.

While it’s changed in a lot of ways, Thomas the Tank Engine has been visiting Spencer for more than 20 years, Brown said. It’s Brown’s ninth year covering the event, but he still looks forward to it.

“It doesn’t get old,” he said, “because you see how happy they are.”

Sunday afternoon the transportation museum was thronged with families and toddlers holding balloons shaped like their favorite engine, or sporting blue-and-white-striped engineer’s hats. Children ran down the sidewalks or pointed eagerly to the train pulling to a stop.

“They literally see something they’ve only seen on TV coming to life before their eyes,” Brown said, “and that’s special.”

In the past few years, the event has seen the addition of Percy, Thomas’ friend, which Brown said helped boost sales.

“It’s grown considerably in the past four years,” he said.

Heather and Robert Bridgers drove from Goldsboro with sons Sawyer, 2, and Carson, 10 months. Both boys sported engineer hats and Sawyer waved to children aboard the train from where they stood on the sidewalk. Crowding the seats and half-hanging out of the windows, the children waved back.

Heather said that the family hasn’t ridden the train yet.

“We had to come see Thomas, first,” she said.

While the train, pulled by Thomas, was loading, children had an opportunity to pose in front of the tank engine’s smiling face.

“This is pretty awesome, just to see the enjoyment on their faces,” Heather said.

The Bridgers’ train set out later in the afternoon, and Heather said they couldn’t wait.

While the day is a fun event, Brown said it’s also boosting the museum’s attendance, as a whole. And he said employees are seeing crossover and returning customers with other events — particularly the holiday “Polar Express” ride.

“We’re incredibly happy with the way the public has continued to respond to our events,” he said. “ . . . we’re obviously doing something right.”