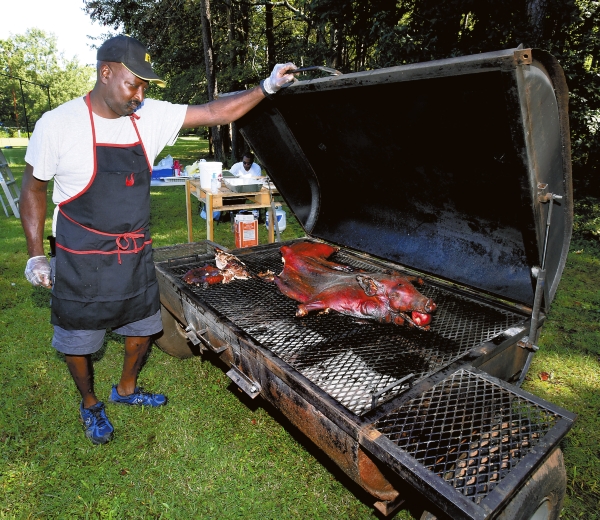 EAST SPENCER — For years, Curtis Cowan held a pig-picking in his back yard. He’d stuff a whole pig — complete with an apple in its mouth — in the smoker and invite the entire town.

This year, with the awarding of a PARTF grant that will help the town renovate its park, the mayor pro-tem decided to scale it up, hosting East Spencer’s first barbecue festival on Saturday afternoon. But for Cowan, it’s more than just a celebration — it’s a way to bring the town together.

“Every town has a festival of some sort. We wasn’t doing anything,” he said.

He hoped the free event, held in Royal Giants Park, would bring the community together, from East Spencer, and from the county as a whole. Mayor Barbara Mallett agreed.

“What better way to let people know that we’re here and we’re grateful?” she said.

Mallett said the town board has been trying to get funding to renovate the park since 2012 — a project with an estimated cost of $600,000. On Sept. 17, they were awarded a NC Parks and Recreation Trust Fund grant. The dollar-for-dollar matching funds grant gave the town $300,000 — along with the $300,000 already raised, East Spencer finally has the funds to complete the project.

Mallett said the money will cover phase I of the redevelopment master plan, which includes a splash pad and new playground equipment. A picnic shelter, cornhole toss courts, renovations to the restroom and shelter, basketball courts, entrance signs and walking trails are also earmarked.

“This is the beginning of big things to happen,” Mallett said, “and we want everyone to celebrate with us.”

A small crowd gathered at the park Saturday to enjoy food from the grill, play a game of basketball or browse a small collection of booths.

Kimberly Cornelius said that she heard about the event through word of mouth, and decided to check it out. Since arriving, she said she’d run into people she hasn’t seen in ages.

“It’s almost like a family reunion-type event,” she said.

An East Spencer resident who asked only to be identified as “Eddie” said that he hoped the barbecue would help give the town a better image.

If Cowan and Mallett have their way, the gathering will become an annual event. And after renovations to the park are completed, it’s on to the next project.

“We’re just so happy and excited that it happened,” Mallett said, “It really, really happened.”