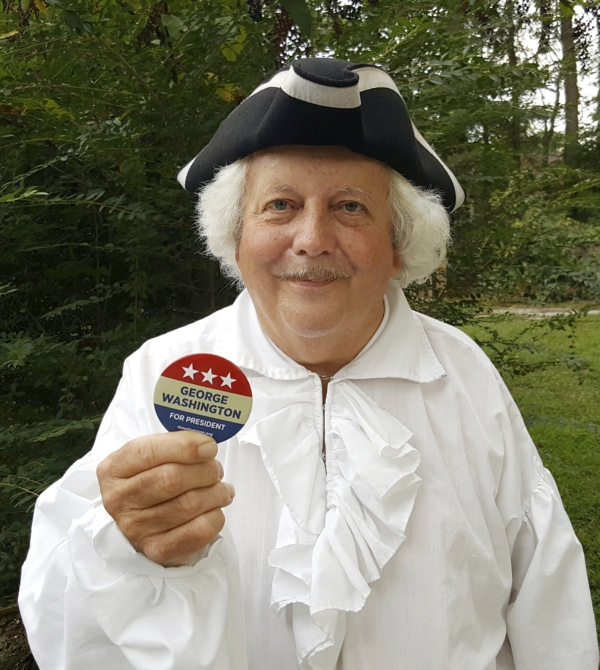 I don’t mean the two living former “Georges” (“former presidents,” both “still George”), but I’m going back further in time.

The name “George” originates in Ancient Greece, where “Zeus Georgos” (not “Gorgo,” which I saw at Salisbury’s Capitol Theater) was the god of crops. East Rowan’s Latin teacher, Mrs. Thayer Puckett, said it’s rare when something can’t be traced back to Ancient Rome or Greece (Greece, the Etruscan League, and Rome being the “Gardens of Eden of Western Civilization”).

At Granite Quarry School, the first George of my memory (besides classmate David Shue’s first name) was in a portrait in most classrooms (except for maybe that of a modern-day “Jeffersonian” here and there), but I’ll return to him later.

The next George slew a dragon (the Germans’ “Siegfried” did likewise).

Another swung on vines and was admonished to: “Watch out for that tree!”

Getting back to that first, grandest “George” in portraiture at Granite Quarry School; he is the “dream candidate” in a “bad dream time!” Throw in John Adams as VP (as before) for a “dream team of character,” not the “characters” seen on the nightly news.

This idea came while planning an October trip with my daughter Rachel and her boyfriend Richard to Mount Vernon. When also perusing the online gift shop items, I came across a “George Washington for President” political button, appropriately red, white and blue, three stars at the top, just like the Washington Family Crest (but white, not red as on the crest).

Disparaging talk of current presidential choices made me decide to embark upon a “campaign” (of sorts) as a comment upon our current state of affairs by selecting an important American historical figure with whom everyone could connect (providing they had paid attention in school).

So I chose George Washington, thinking of how he had always come back when his country needed him (this time, only figuratively).

Why, even later during the day of Washington’s death, he was already “wanted back,” as a physician asked to cut a hole in his throat, pump air into his lungs and infuse lamb’s blood (said to be “curative”) into his veins.

Martha declined, saying George would just want to rest from his life’s labors, ruling him out as a candidate (unintentional pun) for the “reanimation of dead tissue.” Upon such reanimation, I’m sure Washington would have displayed his renewed coordination by dancing the minuet (as he loved doing in life) instead of tap dancing, since tap, Gary Cooper, and the “Ritz” were many years in the future).

I first tried out my Washington “campaign” at Food Lion and Biscuitville, both having fingers on the “public pulse” (the latter also having a finger inside the “public artery”).

Wearing tricorn hat, colonial shirt, and “Vote for George Washington for President” button, I pointed to my button and said: “Don’t forget to vote in November for a proven product!” Another phrase: “The only one you can vote for with a clear conscience!”

Some lady said: “Are you supposed to be George Washington?” to which I responded: “No, this is my statement on the present candidates offered us.”

Two ladies just stared, leaving me to wonder if they thought that since “Arsenic and Old Lace” sanitorium Happy Dale was overflowing with “Napoleons,” it might could use a “Washington!”

I received a good reception for my singing and my political button when I performed German songs at the Rowan Museum’s German Fest. Those people were in an “American colonial frame of mind.” (Such campaigning would probably also go over at Old Salem, Colonial Williamsburg, and without a doubt, Mount Vernon.)

Not one has yet said: “But he’s dead!” to which I would have responded: “So?” (I sometimes think maybe Saint Peter no longer gives the Heavenly welcome, perhaps having lost his job on Dec. 14, 1799 to an even better man.)

Everyone has reacted good-naturedly, so maybe I’ve cheered some hearts in need of cheering.

Election Day 2016 follows Halloween by eight days (this year, the two days might be seen as interchangeable). So I will still be wearing my “George outfit” plus campaign button when the tricksters and treaters are out in force. Some may look and say: “Another poor Charlie Brown, waiting for a different kind of Great Pumpkin to return!”

But what a truly “great” pumpkin that would be!