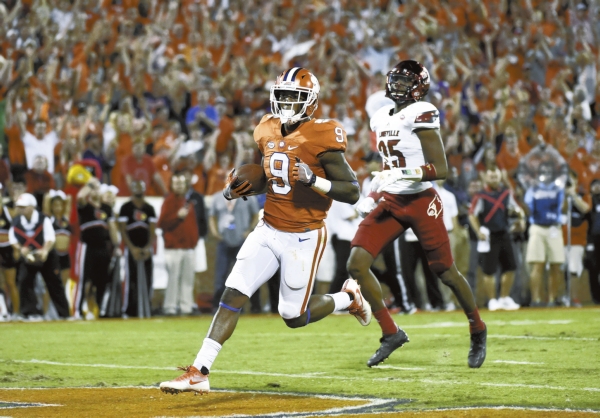 CLEMSON, S.C. (AP) — Deshaun Watson threw for five touchdowns, including two in the final seven minutes, as No. 5 Clemson rallied for a 42-36 victory over No. 3 Louisville after the Tigers lost an 18-point lead to Lamar Jackson and the high-flying Cardinals on Saturday night.

The Tigers (5-0, 2-0 Atlantic Coast Conference) looked like they had this one wrapped up before halftime, scoring four TDs in the second quarter to lead 28-10 at the break. Then “Action” Jackson got moving and the Cardinals (4-1, 2-1) scored on five consecutive possessions to take a 36-28 lead with 7:50 left.

Artavis Scott began Clemson’s comeback with a 77-yard kickoff return and Watson found Mike Williams for a 20-yard scoring pass two plays later. Clemson forced Louisville to punt for the only time in the second half and Watson guided the game-winning drive, ending on a 31-yard TD catch by Jordan Leggett.

Jackson had one last surge, leading Louisville to Clemson’s 9. But James Quick was knocked out of bounds by safety Van Smith on fourth down with 33 seconds left to seal the win.

Louisville: The Cardinals remain a strong team and may wind up running the table without another loss in the regular season. Louisville will regret its slow first half in this one, which may have cost it an ACC title and possible national championship shot.

Clemson: Can anyone stop the Tigers from claiming the ACC Atlantic’s spot in the league title game? Florida State’s loss to North Carolina means the Tigers would have to lose at least twice for the Cardinals, Seminoles or anyone else in the Atlantic to have a chance. Clemson is 19-4 against its remaining ACC opponents the past five years, with three of the defeats coming to Florida State.

Louisville: Gets next week off before returning to action against Duke on Oct. 14.

Clemson: The Tigers have another short week, traveling to Boston College to play on Friday night.