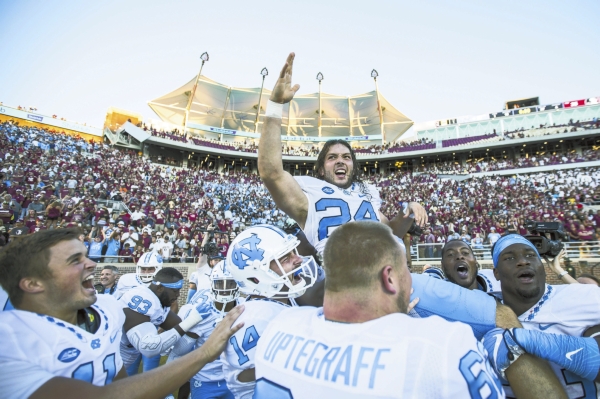 TALLAHASSEE, Fla. (AP) — Nick Weiler ended up going from goat to hero in the span of 23 seconds.

North Carolina’s senior kicker saw No. 12 Florida State take a late one-point lead with the difference being a blocked extra point. But the Tar Heels were able to drive 38 yards in three plays, helped by extra yardage due to a pass interference call, to set the stage for Weiler to atone for his earlier mistake.

He nailed a career-best, 54-yard field goal as time to expired to give North Carolina a 37-35 win and snap the Seminoles’ 22-game home winning streak. It was the second straight week that the Tar Heels (4-1, 2-0 Atlantic Coast Conference) won in the final seconds. Last Saturday, they defeated Pittsburgh by one point on a touchdown pass from Mitch Trubisky with two seconds remaining.

“I knew it was within his distance. That wasn’t the issue,” North Carolina coach Larry Fedora said of Weiler’s kick. “He had something to prove. After the extra point got blocked, I talked to him on the sideline and said he had to get it out of his head. He got his mind right and we gave him his shot.”

The Tar Heels had lost three straight games to ranked teams, and the Seminoles are the highest-ranked team they have knocked off on the road since defeating No. 9 Syracuse in 1996.

Trubisky had his third straight 400-yard game, completing 31 of 38 passes for 405 yards and three touchdowns. Ryan Switzer had 14 receptions for 158 yards.

Florida State (3-2, 0-2) trailed 21-0 in the second quarter but rallied to take a 35-34 lead in the final minute on a 8-yard touchdown run by Deondre Francois. The freshman quarterback, who was 20 of 32 for 372 yards, looked like he was going to be sacked at the UNC 8 but eluded tackles by Mikey Bart and Malik Carney to score.

Dalvin Cook accounted for 256 yards of total offense — 140 yards rushing and 106 receiving — and three touchdowns. He is the first Florida State back to have a 100-yard rushing and receiving game.

Earlier in the game, Weiler was short on a 51-yard try along with the blocked PAT.

Weiler’s game-winning field goal tied the second-longest in school history and he had plenty of distance. He celebrated by running around the field and doing the “tomahawk chop.”

“I’m pretty sure I blacked out after making the kick. I’ve never been that tired or ran that much in a game,” Weiler said. “Once he gave the hands up I was out, next thing I remember was being on the bottom of the dog pile.”

Florida State’s Ricky Aguayo also had a long day as he missed all three of his field goal attempts. He was wide right on two and the other was blocked.

It’s hard seeing the Seminoles fall from No. 12 to out of the poll but they could if voters into account that FSU is 7-5 in its last 12 games. North Carolina fell out of the rankings after losing its opener to Georgia but this win could put them back in the Top 25.

North Carolina: Even though the defense continues to struggle — it allowed 595 yards to FSU — Trubisky and Switzer are emerging as one of the top duos in the Atlantic Coast Conference. Trubisky has not thrown an interception in 240 attempts this season.

Florida State: The Seminoles were considered to be a College Football Playoff contender at the beginning of the season but now needs to string some victories together if it even hopes to make a top-tier bowl game. The defense is allowing 6.98 yards per play, which is among the worst in the Football Bowl Subdivision.

Florida State: The Seminoles travel to Miami looking to extend their winning streak over the Hurricanes to seven.