Variety is the spice of this year’s OctoberTour 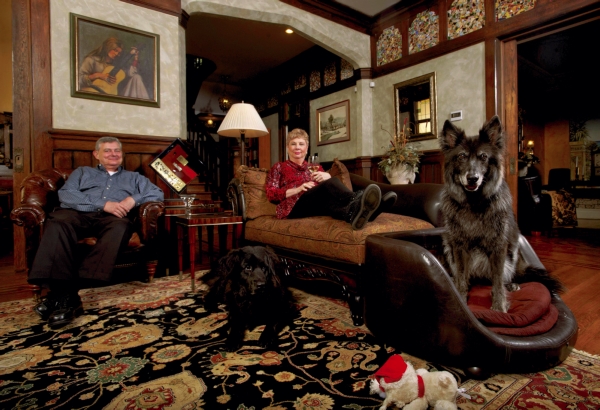 John and Pam Schaffer and their two dogs Kahlua and Missy relax in the living room of their Spanish Mission-style home, which will be included on this year’s OctoberTour. Jon C. Lakey/Salisbury Post

The Greek writer Euripides wrote, “Variety of all things forms a pleasure.”

He was correct, and he would most likely enjoy this year’s OctoberTour. The 41st annual event is set for Oct. 8-9.

“We’ve made an effort to put a variety of architectural styles on tour,” says Anna Moorefield, event coordinator.

Attendees will see homes with styles from Federal to Tudor Revival, Spanish Mission to English Cottage, Victorian to farmhouse.

The tour also stretches beyond the boundaries of Salisbury, Moorefield notes. “We also want to highlight the China Grove Roller Mill this year, because it’s one of the few remaining roller mills still in existence.”

She adds, “Our mission says to preserve, protect and revitalize the historic fabric of Salisbury and Rowan County. People really seem to enjoy going out and seeing the landscape. There are many historic houses in the county that people may not be aware of.”

Here’s a brief look at the stops on this year’s OctoberTour.

Owned by Rowan Museum, the Utzman-Chambers House is one of the finest examples of Federal townhouses surviving in North Carolina. Built by Jacob Stirewalt, the home features an antique staircase which mirrors that of the Peter Kern House, a part of last year’s tour.

Recently featured in Salisbury Magazine, this home is one of the few Spanish Mission-style houses in Salisbury. The house was returned to a single-family home in 1977, and its current owners have completed extensive updates since they purchased it in 2013.

This house is an example of a rehabilitation in progress. It’s one of six being stabilized and renovated by Livingstone College and the Historic Salisbury Foundation. Central Piedmont Builders has been working inside the house, and Al Wilson has been working outside. The home’s most prominent feature is its large porch with Romanesque arches. At 11 a.m. Saturday and 3 p.m. Sunday during OctoberTour, Reginald Brown, a Historic Salisbury Foundation board member, will give a brief lecture about the home.

The Elizabeth Hanford Dole House, open for the first time, is the centerpiece of this year’s tour. Not only will attendees visit the gracious, Tudor Revival home, they’ll see a collection of memorabilia from Dole’s long career in public service. The home was built by Dole’s parents, the late John Van Hanford and Mary Ella Cathey Hanford, in 1937.

Built by a local dentist, this 1½-story English cottage is one of three in the neighborhood. The front porch curves to the north side of the house and features an attractive pergola. The house has had numerous owners over the years, but the current owners, who bought the house in 2010, have brought this delightful Victorian back to life.

This L-shaped, Victorian-style cottage was built by George and Lina Fink, who lived there until their deaths. Doris Ludwick purchased the property in 1973 with the intent to tear it down as it was condemned. Instead, she slowly renovated it, and lived there until 2000. The current owners purchased the house in 2013, and have made it their own by adding a gazebo and creating a walk-in closet.

The Earl Carter House is remarkably intact given the number of occupants who have lived here over the years. The house has a huge side yard, where another house once stood. This cottage once had a front porch, but it no longer remains. Its steep hip roof and front dormer window are still features of the house.

Owned by Historic Salisbury Foundation, the Hall House is a perennial tour stop. This year, attendees and their families can enjoy fire truck rides, music and Colonial games on the lawn, and a Civil War encampment.

The roller mill was built in 1903 and operated until 1995. The mill was placed on the National Register of Historic Places in 1983. Visitors can inspect all of the machinery, which remains in the mill. The Historical Society of South Rowan operated the mill as a museum since 1996. They recently turned the mill over to Rowan Museum, which will continue to open it for tours and events.

Recently featured in Salisbury Magazine, the Moses Corriher House was built in 1902 by Moses and Geneva Corriher, and has remained in the Corriher family. The two-story frame farmhouse expanded as the family grew. Although its current owners have remodeled the house, its character remains intact, with hardwood floors, fireplace bricks, beaded board ceilings and exposed beams all original to the house.

“It’s definitely worth the drive to see this house and the roller mill,” Moorefield says.

Advance tickets for OctoberTour are $20 for members of Historic Salisbury Foundation and $25 for non-members; $10 for children ages 6-12 and $20 for groups of 10 or more. They’re available at the Historic Salisbury Foundation office, 215 Depot St., or from local merchants in Salisbury, Spencer, China Grove and Rockwell. Tour day tickets are $30 for adults and will be available at Henderson Law Office, corner of West Fisher and South Church streets, or at any tour location.

For more information, visit www.OctoberTour.com or call the Historic Salisbury Foundation office at 704-636-0103.