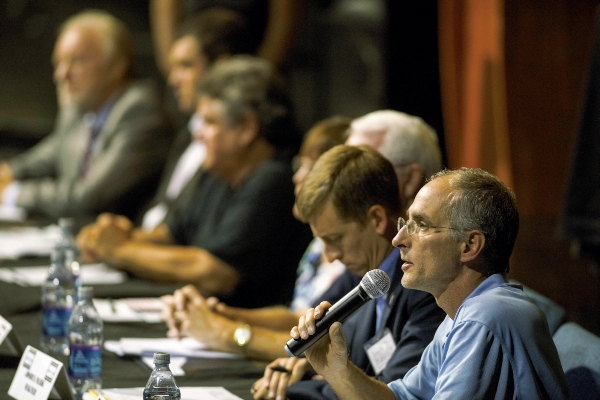 JON C. LAKEY / SALISBURY POST Salisbury Rowan Board of Education candidate Mike Julian makes comments during the forum. Livingstone College hosted a candidate forum ahead of the upcoming election. Candidates for Rowan County Board of Commission and Rowan-Salisbury Schools Board of Education were paneled for comments and questions from Livingstone College SGA President Kenya Glover who served as the forum moderator. Friday, September 30, 2016, in Salisbury, N.C.

SALISBURY — It turns out there’s not a consensus among school board candidates about the most important issue facing the Rowan-Salisbury system.

Issues that Rowan-Salisbury School Board candidates see as most important include: tens of millions of dollars in capital needs, ensuring the system recruits top-notch teachers, the attitude of the general public toward the system, stopping the one-to-one initiative and poverty. Some candidates agree on what’s most important, but a Friday forum at Livingstone College helped separate candidates from one another on issues facing Rowan’s public schools.

During the forum, each school board candidate was asked two questions — about the most important issue facing the system and an action taken by the state legislature that have negatively affected local schools.

Alisha Byrd, running for seat 5, was unable to attend the meeting because of a previously planned trip with student participants in her mentorship group Gemstones Academy.

When asked about the most important issue, Michael Julian, running against Josh Wagner for the District 3 seat, listed capital needs.

“Past boards have neglected the infrastructure of the school system and gotten us into the point where we are way over our head with infrastructure needs,” Julian said.

Julian also said the projected cost of the consolidated Western elementary school is too expensive.

Wagner was next and also spoke exclusively about capital needs. Wagner dissected many of the points made by Julian — his only competition — and spoke for a longer period of time.

“Yeah, those capital needs are huge,” Wagner said. “How do we answer all those? The bottom line is that we can’t right now.”

The current board has taken proactive steps, such as developing a long-range plan for fixing capital needs, Wagner said.

Wagner and Julian were the only two school board candidates who spoke about infrastructure needs. Next up was Gene Miller, running for seat 5 against incumbent Chuck Hughes and Byrd. Miller was one of two candidates to stress attracting and retaining quality teachers as the most important issue.

“We cannot have stability in a student’s school life if we are constantly changing teachers or, worse yet, not having a teacher,” Miller said. “Test scores are not going to consistently improve until we get stability in the classroom instruction.”

Miller, who previously worked as assistant superintendent in the Rowan-Salisbury School System, said he’s heard of instances where classes had a substitute teacher the entire year.

“Teachers are responsible for being parent, nurse, psychologist, social worker, and as well as for performance on test scores,” Cox said. “Until we see teachers as teachers … we are undermining the best for our children.”

Teachers shouldn’t have to face unrelated, additional responsibilities, she said.

William “Dr. Rob” Robertson, facing Cox and Andrew Poston for seat 7, was the second of two candidates to focus on hiring and retaining quality teachers as the most important issue.

All public officials need to work together to attract young families to the county, he said.

For his part, Poston claimed he’s received multiple requests from students to take away laptops used in the system or limit the use technology that’s part of the school’s one-to-one initiative.

“Let’s look at what this does to our impoverished students,” Poston said. “You’ve got a situation where two students can leave school. One can go and do their homework at home because they have stable, reliable Wi-Fi. And, the other is going to be forced to go to the library or go far away from their homes.”

Hughes was the final candidate to speak and the only one to list poverty as the most important issue facing the Rowan-Salisbury School System. Hughes said studies have shown that children from impoverished families face steeper challenges to learning than those from families with more resources.

He said poverty is a “tremendous challenge” for students in the public school system. It’s a long-term problem, he said. The immediate way to address the problems, Hughes said, is for tutors, parents and caretakers to nourish students physically and mentally.