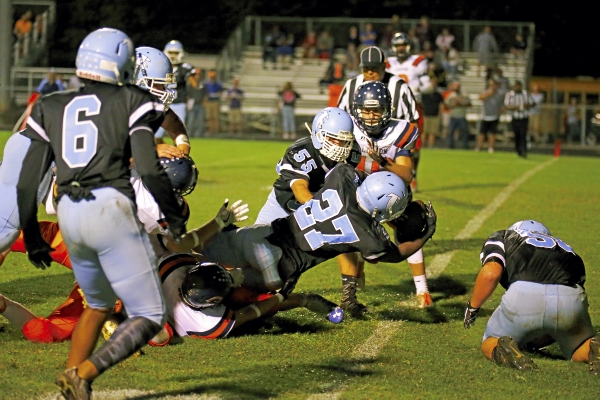 MOUNT ULLA — Senior running back Jovon Quarles got a surprise visit from his Navy S.E.A.L father and turned in a career-best 202 rushing yards to spur West Rowan to a 28-15 South Piedmont Conference win against visiting Carson.
Friday’s game was the first time this season that Quarles’ father (also named Jovon) has had a chance to see his son in action and he watched him lead the Falcons (5-1, 4-0) into first place in the league.
“He shocked me by being here,” said Quarles, who topped 100 rushing yards for the fifth time in six outings. “He didn’t tell me he was coming. He kind of snuck in on me.”
On the field, Quarles wasn’t sneaking around. It was mostly straight ahead, between the tackles.
“Carson really tried to limit our passing game,” West coach Joe Nixon explained. “They were committing two guys to (standout receiver) Kortez Weeks, so our thinking was, ‘Hey, let’s run the ball.’ There were times when they blitzed and Quarles really hit the holes.”
West dominated the first half with a stingy defense led by linebacker L. J. Robinson and linemen Tyler Wheeler and Devin Turner.
“We keyed on No. 4 (Carson QB Owen White) and we knew we had to stop their trap because that’s one of their favorite plays,” Robinson said. “We knew Carson would play very hard against us, but we did a good job of playing our responsibilities.”
Carson put together a solid drive on its second possession, but when push came to shove, Wheeler stopped White short of the sticks on a fourth-down play at the West 20.
West then moved 80 yards and scored the game’s first points early in the second quarter. The key play was a 15-yard completion from QB Payne Stolsworth to Weeks that had a face mask penalty tacked on to the end of it.
Stolsworth flipped to Weeks for the 10-yard TD that finished the drive and put West on top, 7-0.
“I went in motion and Armoni Hogue ran outside to the flat and the spur went with him,” Weeks said. “That created some space for me, and Payne and the offensive line executed.”
With 2:34 left in the half, Quarles made a terrific individual effort.
“They were blitzing, I saw a cutback lane open up, and I turned it on,” Quarles said.
It looked like a routine 4-yard carry as the play began on a second-and-6 from the West 39, but Quarles whipped through arm tackles and traveled 61 yards. Nixon called it the game’s biggest TD, as it put West ahead 14-0 at the break, instead of 7-0.
“We just didn’t wrap up, didn’t take him to the ground,” Carson coach Joe Pinyan said.
Carson moved the ball well after halftime, but the Cougars lost three fumbles in the second half and West cornerback Deyquan Byrd came up with his county-leading fifth pick of the season. That was too many turnovers for the Cougars to overcome.
“I feel like we’re just as good as they are,” Pinyan said. “Our kids couldn’t have played any harder than we did, but we made too many mistakes. We just didn’t take care of the football.”
Early in the third quarter, Quarles broke another one, this time roaring 44 yards on a second-and-20 play from the Carson 45. Carson cornerback Brenden Westbrook knocked the ball loose at the goal line as Quarles strained for the pylon. The ball went out of bounds. Officials ruled that it was still West’s ball at the Carson 1, but Pinyan contended the ball had actually gone across the corner of the end zone before going out of bounds. If officials had seen it that way, it would’ve been a touchback and it would’ve been Carson’s ball on the Carson 20.
“A very huge call,” Pinyan said. “And they never gave me an explanation.”
A penalty moved West back to the 6, but Martavio Rankin, returning from a knee injury, punched in a rugged touchdown from there, and the Falcons led, 21-0.
Byrd’s interception with about eight minutes left to play gave West the ball near its own goal line. That led to the safety that put Carson on the board, trailing 21-2, with 7:15 left.
West answered swiftly with another Stolsworth-to-Weeks touchdown to make it 28-2. The score came on a 13-yard completion over the middle.
“Kortez was in the slot and I saw a linebacker blitzing,” Stolsworth said. “I read it, and I got the ball to Kortez in open space.”
Carson (3-3, 2-2 SPC) didn’t throw in the towel. White made a nice throw and Deven Youker made a diving catch in the end zone for a 25-yard TD with 1:58 left to make it 28-9.
“I told Youker in the huddle that it was coming to him and to go get it,” White said. “He made a great play.”
White had unusual rushing yardage for him (77) as well as 95 passing yards.
“I tried to read the option and they were taking some things away, so I’d just get what I could,” White said. “We all fought. Just too many mental mistakes tonight.”
Carson tacked on another score on the final snap when Luis Cipres picked up a fumble and headed for the end zone.
Concord’s upset loss to Central Cabarrus put West Rowan in first place in the SPC, and a lot has changed since the Falcons were blasted, 41-0, by Davie County in Week 2. Since then, West has won four in a row.
West is now 11-1 against Carson all-time.
“I still don’t know how good we are, but anytime you play a county rival and control the game, you have to be pleased,” Nixon said. “I felt like we controlled the line of scrimmage.”