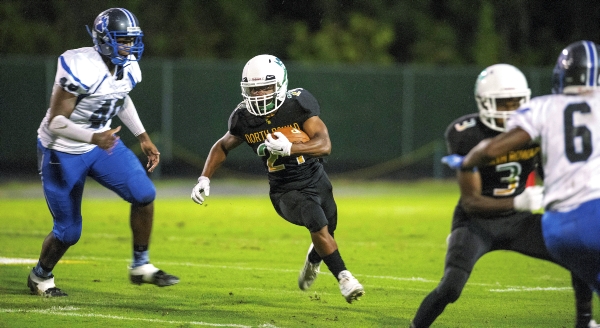 LEXINGTON — North Rowan’s Central Carolina Conference opener was ugly everywhere except where it mattered — on the scoreboard.

The Cavaliers launched the first volley in the conference race Friday night with a 20-14 victory at Lexington, despite a handful of impossible-to-ignore incidents. There were two snaps that sailed over punter Jacob Young’s head, 165 yards in penalties and a couple of coaches relegated to team bus after being dismissed with less than five minutes to play.

“Lexington’s a good football team,” head coach Ben Hampton said after North improved to 5-2 overall. “They’ve got some athletes, but we really shot ourselves in the foot like crazy.”

They did. North had 14 penalties, including eight that went for 15 yards. Assistant coach Josh Sophia was ejected with 4:46 to play when he was flagged for unsportsmanlike conduct for the second time. That earned Hampton — by rule — a trip to the parking lot as well.

“The new rule is if you get two unsportsmanlike calls against the sideline, the head coach has got to go,” Hampton tried to explain. “Whether it’s on me or anybody, I’ve got to leave. We’re not real sure what the determination is going to be. I don’t want to say anything further on that.”

Fair enough. What saved North was the precise play of its offensive line, a group that peppered Lexington’s defense until the Jackets threw their arms in the air and surrendered. North finished with 397 yards rushing, including a school-record 290 by junior Jaleel Webster.

“He’s just a beast,” said right guard Taelor Davis, a 224-pound senior. “He may be small, but he can get going. Whenever he has that chance he’s gone.”

Webster — a 5-foot-7, 165-pound load with a Maserati engine — got his first chance on the game’s first play from scrimmage. He took a handoff from quarterback Corbin Smith, broke toward the left sideline and jetted 65 yards for a touchdown just 13 seconds into the match. The lane was wide open, sealed off by left tackle Bryson Deal.

“After that first quarter we knew we could anchor behind our running game and keep getting first downs,” said Hampton. “But we kept hurting ourselves with penalties. We’d get a big run on first down and get a false start. We’d get another run and we’d get an unsportsmanlike or a personal foul. We can’t do those things and be successful. The penalties have got to stop.”

Webster punctured Lexington (3-3, 0-1) for 169 yards on 13 carries in the second half alone. Most impressive was his 71-yard burst midway through the fourth quarter that helped set up Young’s 27-yard field goal that made it 20-7 with 5:10 remaining.

“He’s been our workhorse all year,” Hampton said. “We’ve got him running downhill. He’s a strong-willed kid with a low center of gravity, so there isn’t a lot of torso space to be tackled with. They’re hitting him in the legs, and as long as he keeps those legs chopping, he’s tough to bring down.”

North took a 14-0 halftime lead when Smith — following an interception by teammate Terren Smith — lobbed a 25-yard TD pass to senior De’Andre Gray on the right side. Lexington took the second-half kickoff and marched 78 yards in 10 plays and drew within 14-7 when quarterback Saafir Craven connected his brother Adrian on a 15-yard touchdown pass.

Then things got interesting. Facing fourth-and-4 from its own 26-yard line, North was forced to punt — and disaster struck when the snap whistled past Young, who instinctively pounced on the ball on the 1.

“Very uncharacteristic. We haven’t had to deal with that this year,” Hampton said. “We talked to our kicker about that, about just picking it up and running out of the end zone, taking a safety. We’d rather give up two points than six.”

Except that North’s defense didn’t give up any this time. On first-and-goal, Lexington’s Adrian Miller was stopped for no gain. On second down, Jayron Roberts was chased down for a seven-yard loss. On third down Craven completed a short pass to the three. And on fourth, kicker Ulises Velazquez misfired on a 20-yard field goal attempt.

“We couldn’t let them score there,” said North linebacker Javin Goodine. “Goal-line defense is our specialty. As long as they come up with zero on the drive, that’s a win for us.”

And so it was, even though Lexington drove for another touchdown on its final drive as Hampton and Sophia watched from afar.

“That last drive was something else,” Goodine said. “We were making stuff up as we went along. We really had to adapt to the situation.”