Another bad start, another loss for Blue Bears 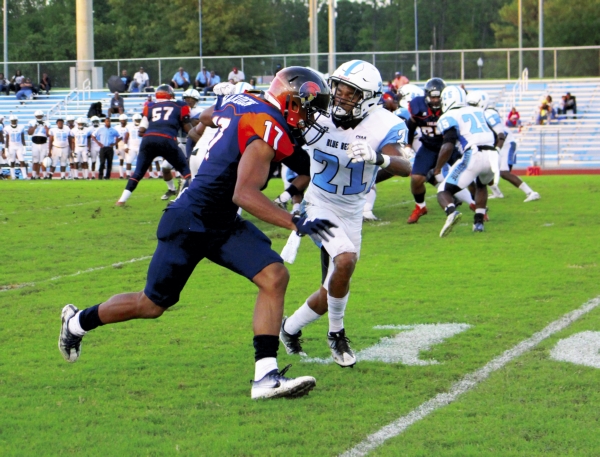 Livingstone could not have gotten off to a worse start. The Blue Bears received the opening kickoff and had three straight negative plays, the last one a sack and fumble by quarterback Xavier Longerbeam.

That turnover led to a quick one-yard plunge by the Trojans’ Kavon Bellamy and just 2:14 into the game, Virginia State led 7-0.

Later in the opening period, Livingstone caught a break. VSU’s Marcus Vanhook fumbled a punt and the Blue Bears recovered at their own 45-yard line. A decent drive, led by quarterback Thaddeus Bell, who relieved Longerbeam, advanced the ball to the Trojans’ 21-yard line. However, Livingstone turned the ball over on downs instead of attempting a field goal.

Throughout the first half, Livingstone continued to lose the field position battle but its defense came up big several times to keep the Trojans from adding to their lead.

However, a short kick from Tyler Keene on the Blue Bears’ first punt of the second quarter led to another VSU score. Bellamy picked up a big first down on a 4th down-and-2, which led a touchdown, a 15-yard pass from quarterback Tarian Ayres to Christian Harden.

Bell led a decent drive out from the Blue Bears’ own 3-yard line but it stalled 31 yards later, forcing another punt by Tyler Keene.

Livingstone’s two-minute offense appeared to be on to something very late in the first half, moving 49 yards and into VSU territory. But Bell’s pass was picked off by the Trojans’ Trevon Bryon, who returned it 70 yards for a back-breaking touchdown. VSU led 20-0, with a minute left in the half.

The Trojans received the second half kickoff and set the tone for the rest of the game. It took Virginia State just six plays to go 75 yards and pad its lead to 27-0. Running back Trenton Cannon broke loose for 50 yards for the score.

Virginia State had three more rushing TDs before the game ended, including a second score for Cannon, this time on a 17-yard run. Corderal Cook and Stephen Mines also had rushing TDs.

Livingstone could not crack the goal line even though late in the game, the Blue Bears had a 1st-and-goal at the VSU 5. Marcus Baisey was caught in the backfield and his fumble quickly ended the threat.

VSU’s defense was highly ranked in NCAA Division II before the game and may have improved its standing with a shutout and an effort that held Livingstone to 209 total yards — just 20 yards on the ground.

Meanwhile, the Trojans padded its CIAA-leading rushing attack with 242 yards on 38 carries.

Bell came off the bench to complete 14 of 32 passes for 159 yards. Everett Ransom, Livingstone’s leading receiver, added to his totals with another good game, four catches for 58 yards.

The Blue Bears return to Alumni Memorial Stadium next Saturday for a 1 p.m. home game against St. Augustine’s.