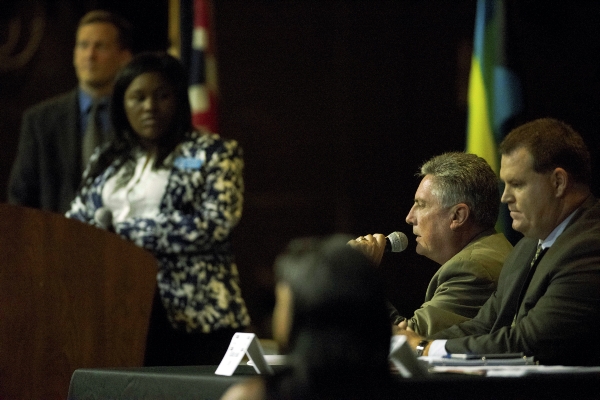 JON C. LAKEY / SALISBURY POST Rowan County Commissioner Craig Pierce makes comments during the candidate forum. Livingstone College hosted a candidate forum ahead of the upcoming election. Candidates for Rowan County Board of Commission and Rowan-Salisbury Schools Board of Education were paneled for comments and questions from Livingstone College SGA President Kenya Glover who served as the forum moderator. Friday, September 30, 2016, in Salisbury, N.C.

SALISBURY — Candidates for Rowan County commissioner all seem to have the same, or similar solutions, for ensuring that college graduates choose to live in Rowan County after graduation.

During a candidate forum at Livingstone College on Friday, candidates were specifically asked how they would encourage local college students to stay in the area after graduation. While candidates gave answers with slightly different details, the basic premise was the same — add good-paying jobs.

For his part, Caskey answered the question by saying county commissioners need to recruit companies that will provide “good jobs.” It’s also important for commissioners to focus on items related to quality of life to retain young residents and they secure a good job.

Then, he touted projects commissioners have worked on in recent years, specifically mentioning luring businesses such as Gildan Yarns to the county, a recently completed comprehensive parks plan and working with the public school system to identify capital needs.

“So, a lot of the things that we need to do are make sure that you have good jobs to stay here with, have places to live, have things to do, feel like your families are safe,” he said. “We understand that for us to grow we need to increase our population in the county and the first thing we need to do is keep the folks we already have here.”

In her answer to the same question, Levy said commissioners have done better in recent years to improve Rowan, but they aren’t “thinking outside of the box.”

“If elected, that’s one thing I hope to push,” she said. “… Let’s push that and give you all the opportunity, as well as all the other students and students that may wish to move home from other universities, give them an opportunity to be able to come here and grow and stay here within the county.”

Later in the forum, Levy would say commissioners should recruit industries that match degrees offered at local colleges.

It’s not as simple as adding jobs, however, Lyerly said.

“It’s not just jobs, because jobs could be McDonalds,” he said. “I think you need manufacturing jobs, a living wage job. That’s going to help everything.”

He stressed that county commissioners should listen to feedback from local residents, including college students.

Lyerly said he’s open to ideas that members of the public might be willing to offer.

“We can create an atmosphere of diversity, where you not only have certain areas of town where you can have your type of restaurant, your type of clothing stores, your type of leisure activities, but that you’ll see it across the entire county,” Pierce said, referring to businesses that attract specific demographic segments of Rowan’s population.

Commissioners need to pay attention to all segments, he said.

“We have to have a community that reaches out to each and every type of individual that this community holds,” Pierce said.

During the Livingstone forum, challengers were asked about actions taken by incumbents that they disagreed with. Moderators did not give incumbents a chance to respond to charges levied by the challengers.

Levy, for example, accused county commissioners of not calling the office of Transportation Secretary Anthony Foxx about an ongoing project to extend the Rowan County Airport’s runway.

“And, I believe it’s because he was appointed by President Obama,” she said.

Lyerly condemned commissioners for being willing to sell a county building at 1236 W. Innes St. for more than a million dollars less than its assessed tax value. He said commissioners should not have purchased West End Plaza. The county shouldn’t be involved in real estate at all, Lyerly said.

When asked after the forum about the challengers’ statements, Craig Pierce compared Levy’s charge to calling Obama for getting a parking ticket outside of the White House. Commissioners have worked through the Federal Aviation Administration to get funding for an airport extension.

“I don’t care who appointed Anthony Foxx,” Pierce said. “If I thought calling him would get us some money, I’d call him, but the first thing he would say is, ‘Why aren’t you calling the FAA?’ I mean, it’s just that simple. It ain’t got nothing to do with Obama. What the hell is that about?”

Caskey didn’t have anything to add to Pierce’s statement.

The interior of the West Innes Street building is covered in mold. It also contains asbestos and some lead in door casings.

Caskey added that commissioners have offered building space, including the West Innes building and West End Plaza, to other agencies. The Rowan-Salisbury School System is one example. There has been no interest, Caskey said.