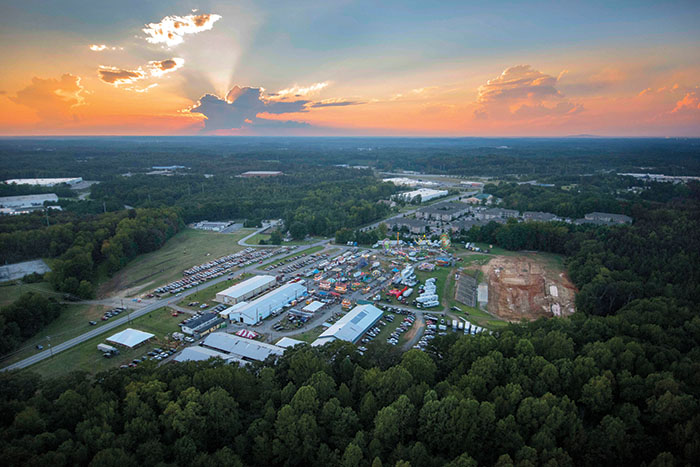 SALISBURY — Rain isn’t an unusual sight during the Rowan County Fair, and this year the annual event got off to a good start before rain storms came.

During the first three days, there were an estimated 20,000 tickets sold for the fair, said manager Johnny Love. In 2015, rain washed out the fair, leading to only 2,600 or so tickets sold during the entire event.

At a stand for Salisbury-based Hoff’s Grill, workers joked that sales on the first night were 100 percent better than the entire fair in 2015. It was the truth.

“Overall, the fair has been great this year,” Love said. “The three days of rain has hurt our attendance. That’s one thing we can’t control is the weather, but we hope that during the rest of the days people come out.”

Under clear skies at the fair on Thursday, Russ and Kathy Stevens were enjoying corn sold by the West Rowan High School Future Farmers of America. Both said they came to the fair in 2015, but were soaked by rain. They were all smiles on Thursday evening.

Gates open today at 4 p.m. for the Rowan County Fair. Rides open at 5 p.m. In addition to rides and multiple circus shows, Friday’s fair events include a dairy cattle dress up at 6 p.m. and cattle showmanship at 6:30 p.m.

On Saturday, gates open at 1 p.m. Rides open at the same time. Other events on Saturday include the lawnmower pull at 6 p.m., miss and master Rowan County Fair at 7 p.m. and fireworks at 11 p.m.

Helicopter rides at the Rowan County Fair will continue regardless of time. Last year’s fair included rides, too. Because of rain, however, there weren’t as many riders as this year. Heli-Team, based in Orlando, is providing the rides for the second-straight year. JON C. LAKEY / SALISBURY POST Allen Leonard holds onto a pink raccoon stuffed animal that he won at one of the carnival games. The Rowan County Fair continues to the enjoyment of fairgoers who came to take in the food, rides and sights. Thursday, September 29, 2016, in Salisbury, N.C.