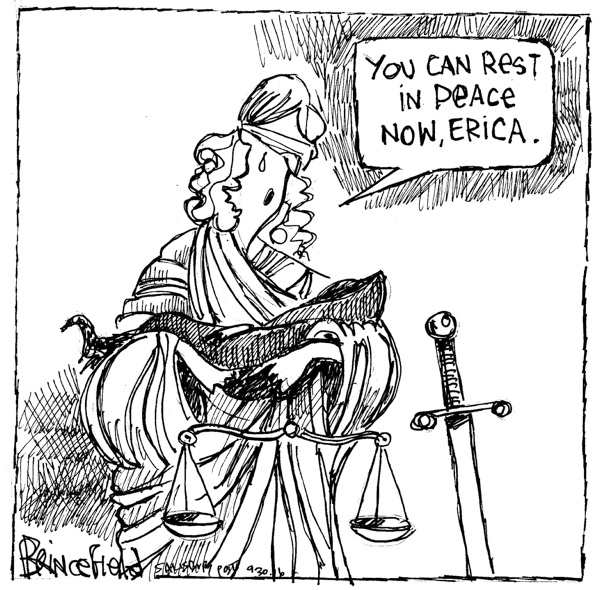 Erica Parsons’ remains may finally tell us what Erica herself never could — that she was cruelly abused throughout her short life, abused and neglected to death.

Now, it’s our collective responsibility to get justice for this helpless little girl.

The unearthing of Erica’s remains in Chesterfield County, S.C., this week ended what little hope there was that she might still be alive somewhere, somehow. There will be no more age-progression drawings of what she might have looked like at 15 or 17. Erica was 13 when she was last seen in 2011, and she probably died at 13.

Charges have yet to be filed in Erica’s death, but adoptive father Sandy Parsons led authorities to her hidden grave. This much we know: Not only did he and wife Casey fabricate a story about handing Erica off to a mysterious relative, they had the gall to tell their improbable story on “Dr. Phil” and expect sympathy for it. The entire nation saw through their deceit.

Unable to find a body, authorities filed fraud charges against Sandy and Casey Parsons for cashing the checks they received for Erica’s care, and they are in prison. Now that Erica’s remains have been found, murder charges should soon follow. The people responsible for this young girl’s death should be punished to the full extent of the law.

Erica’s sad story sheds light on the insidious nature of child abuse, often hidden behind a wall of lies and manipulation. Testimony during the Parsonses’ trial revealed that they and other members of the family abused Erica repeatedly, hitting her with fists and belts, withholding food, forcing her to eat dog food, and confining her to a closet. When a social worker investigated a report of abuse in 2004, Casey Parsons reportedly said Erica had gone to live with another relative, and the investigation closed. Erica returned to the Parsons household the next year. Supposedly home-schooled, she lived in isolation through years of abuse and ultimately died.

Erica’s killers probably thought they had buried their horrible secret in the woods of Chesterfield County forever. They were wrong. Powerless in life, Erica left behind a story that gripped everyone who heard it, and authorities were determined to solve this crime.  Finally, her remains have been found. Finally, Erica is powerless no more.