Andre Springs’ cherishes his day of ‘work’ with Arnold Palmer 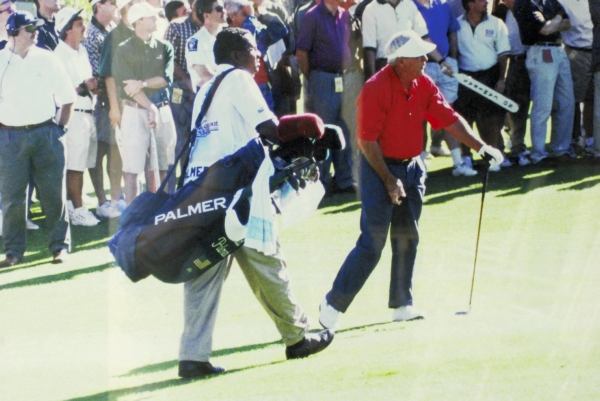 Submitted photo ... Andre Springs, left, served as Arnold Palmer’s caddie during a charity skins game at Birkdale Golf Club in Huntersville in 1997. Springs was an assistant teaching pro at Birkdale, where he worked for 14 years. Springs is now athletic director and head golf coach at Livingstone College. Palmer designed Birkdale and was there for the event, which opened the new course. The golfing legend died last Sunday at the age of 87.

SALISBURY — Andre Springs still seems in awe of that day 19 years ago.

Springs, the athletic director and golf coach at Livingstone College, had a one-round stint as Arnold Palmer’s caddie. Palmer died on Sunday at 87 years old and Springs immediately remembered the day he spent with the “King” of the game.

It was 1997 and Springs was working as outside manager at the brand new Birkdale Golf Club in Huntersville, a course designed by Palmer. Birkdale had been built by Johnny Harris, who, according to Springs, was great friends with Palmer.

To open Birkdale in style, Palmer, then 68, was coming in to participate in a charity skins game with fellow Wake Forest graduates and professionals Curtis Strange, Jay Haas and Billy Andrade.

“There was talk around the clubhouse that some of us would be able to caddie for the pros, but at first, you didn’t know which one you’d get,” recalls Springs. “But Mr. Harris took care of me.”

Harris sent word to Birkdale management that Springs was his pick to be on the bag for the legendary Palmer.

“At first, I thought they were just kidding around when they said I was going to caddie for Arnold Palmer,” said Springs. “When I realized it was no joke, I actually got a little dizzy. I couldn’t sleep the night before the event.”

To be prepared as much as possible, Springs walked the course in the days leading up to his big day, making notes of key yardage points. He thought he was ready, right down to having tees ready when Arnie called for one.

“And right away, at the driving range, Arnold Palmer asked me for his driver and some tees and I proudly handed him some brand new white tees,” remembers Springs. “And he said, ‘oh no, I can’t use white tees. Reach in my bag and get those Pennzoil tees.’”

Springs had not thought of sponsor tees, but Palmer had been a longtime spokesman for the oil company. Palmer laughed it off and for the rest of the day, the two got along famously.

“Arnold was so human, so kind,” said Springs, “but he was into it, he was asking me for help and I had to be quick on my feet, even though I had just learned the course myself.

“After a few holes, I looked around and noticed that the other caddies were having a walk in the park,” continued Springs. “But I was sweating like crazy. He was really leaning on me, asking questions.”

His mind still going 100 miles an hour, Springs gave himself a scare at one point when he counted Palmer’s clubs in his bag and thought he had lost one. How would he tell one of golf’s all-time greatest players that he lost a club?

In a panic, while Palmer was several yards away, hitting a shot, Springs called his manager over and explained the situation.

Springs recalls with a laugh that the manager nodded his head toward Palmer and calmly said, “’Did you count the one in his hands?’”

Springs said that he finally calmed down at the turn when Palmer, known for being a generous and humble man, made a very nice gesture. A boxed lunch had been prepared for the players and Palmer asked Springs to share his sandwich.

“He asked me if I wanted half of his sandwich,” said Springs, who remembers that it was of the turkey and cheese variety. “I was touched by that gesture. It was unreal in my mind. Here I am, walking down the fairway, sharing a sandwich with the great Arnold Palmer.”

Springs, 59, is an accomplished golfer in his own right. He was inducted into the Fayetteville State University Sports Hall of Fame for his playing career there — the CIAA’s top player on four conference championship teams.

Springs is a member of three other halls of fame and he and partner Larry Frost were the first African-Americans to win the prestigious Labor Day tournament at the Country Club of Salisbury in 1987.

But Springs still calls that day with Arnold Palmer “the highlight of my golf career …  a day I’ll never forget.”

Springs said that he never had any other contact with Palmer but the story doesn’t end there.

Several months later, in December, a couple of sportswriters asked Springs to play a round of golf with them on the new Birkdale course. The writers noticed as each hole was going by that Springs was in a zone.

“They didn’t say one word to me on the back nine,” he says.

Springs posted a score of 66 that day to establish a new course record.

Later, Harris would pay a $2,000 fee for Springs to attend a national teaching school in Myrtle Beach so he could become a teaching professional at Birkdale — the job he held when a chance meeting at the course with Livingstone president Dr. Jimmy R. Jenkins Sr., led him back to collegiate athletics.