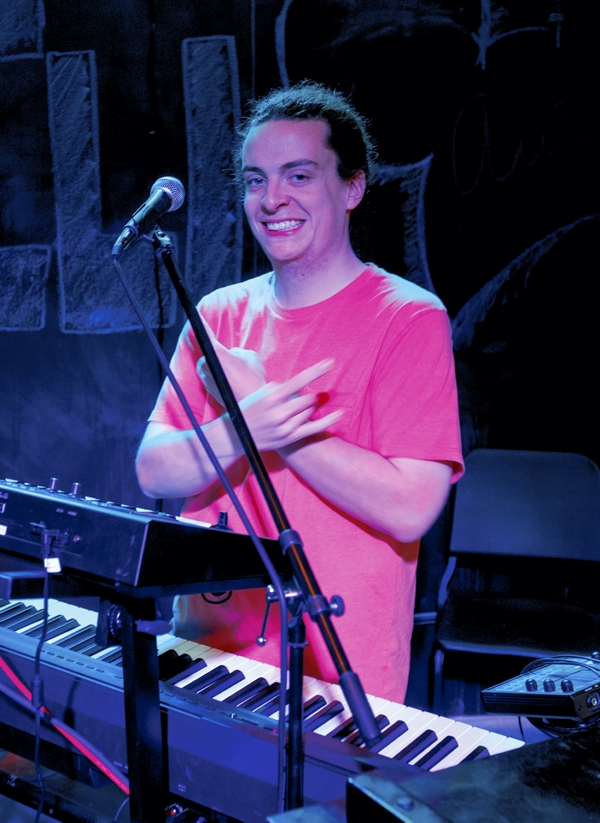 “Stories: Where words end, music begins” will be the theme of the first choral concert of the 2017-2017 academic year at Catawba College. Beginning at 4 p.m. on Sunday, Oct. 2 in Catawba’s Omwake-Dearborn Chapel, the Catawba Singers, Chamber Singers and PopAC will present a program of choral music.

With 80 singers drawn from across the Catawba student body, the Catawba Singers is the largest of the three performing ensembles. They will perform works by Dan Forrest, Moses Hogan and David Dickau among others. The choir will sing the  unpublished work of NC composer Gwen McLeod Hall, “How did you live?”

The Catawba Chamber Choir will be led by student conductor and conducting scholarship recipient Robert J. Thornton, in Dan Forrest’s “Entreat me not to leave thee,” with works by Morten Lauridsen completing their cycle.

PopAC, Catawba College’s newest ensemble, will feature an arrangement of Elvis’ “Falling in Love with You” as well as Catawba student Caleb Garner’s arrangement of “I won’t say I’m in love” from Disney’s Hercules.

Additional choral selections will be offered by the Catawba Women’s and the Catawba Men’s Ensemble. The Men’s Ensemble was recently chosen to perform for the NC Choral Directors’ Convention in Charlotte. They will perform at UNC-C on Friday, Oct. 7. From over 200 recorded submissions, Catawba was one of the four college choral ensembles selected to perform, the second such honor in as many years.

Catawba choirs are under the direction of Dr. Phillip E. Burgess and accompanists will be Jacob Hahn and Susan Trivette.

The 75-minute concert is free and open to the public.

After the parade, keep on celebrating at the Open House at Kannapolis City Hall, 401 Laureate Way. There will be a Quiet Time Touch-A-Truck with no lights and sirens. There will be concessions, fun children’s activities, music and a special birthday ceremony at noon.

Vote on your favorite truck from the parade and awards will be presented to the winners at 2:30 p.m.

The parade will begin at the intersection of Laureate Way and Biotechnology Lane and continue down Laureate Way to N. Research Campus Drive.

If you are a fire department or an individual with a fire truck who would like to participate in the parade contact Kirk Beard at 704-920-4272/kbeard@kannapolisnc.gov

CONCORD — “Deathtrap” is a  play-within-a-play written by Ira Levin in 1978 with many plot twists. It holds the record for the longest-running comedy-thriller on Broadway and was also nominated for the Tony Award for Best Play. It was adapted into a film starring Christopher Reeve, Michael Caine and Dyan Cannon in 1982.

EAST SPENCER — The Town of East Spencer announces its first BBQ Festival at Royal Giants Park, 200 Robinson Road, on Saturday, Oct. 1 from 1 until 6 p.m., featuring hometown grill masters. There will be BBQ sandwiches, hamburgers, hotdogs and much more food, as well as a live deejay, local talent, 3-on-3 basketball, and more for the whole family.  Local vendors welcome.

‘The People: Indians of the Piedmont’

KANNAPOLIS — Kannapolis History Associates host Terry Holt, president of the Rowan History Club, as he shares how Indian tribes interacted with the colonial settlers in the Piedmont. These are the early people John White and others met. Holt will tell about early art and laws of the colonies. Monday, Oct. 3 at 7 p.m. at A. L. Brown High School social room, 415 E. First St., Kannapolis, east of Kannapolis Performing Arts Center auditorium. Call Phil Goodman at 704-796-0803 for more information.

Band dance at the Hurley Y

LSt to present ‘Tuesdays with Morrie’

“Tuesdays with Morrie” is the autobiographical story of an accomplished journalist driven solely by his career, and Morrie Schwartz, his former college professor. Lee Street theatre, 329 N. Lee St.

‘The Art of Murder’ is OCT’s 5th annual Halloween fundraiser

CONCORD — In a remote estate in the Connecticut countryside, Jack Brooks, one of the most accomplished and eccentric painters of his generation, awaits the imminent arrival of his art dealer. But the visit is not a standard one, for Jack feels wronged, and he is intending to kill the man. As Jack lays out his intentions for the evening, his wife, Annie, calmly paints. She is reluctant to go along with the plan, until Jack’s threat of violence convinces her otherwise. Harried and annoyed, Vincent, Jack’s flamboyant art dealer, arrives. Will Jack carry out his plan? Will Annie help him? Or is something else going on?

“The Art of Murder,” written by Joe DiPietro and directed by Brian Rassler, is Old Courthouse Theatre’s fifth annual Halloween fundraiser. Show dates are Friday-Saturdy, Oct. 28 -29 at 8 p.m. and Sunday, Oct. 30 at 2:30 p.m. Tickets are $20 general seating, available at Showtix4u.com or at the Old Courthouse Theatrebox office at 704-788-2405.

Family events at THD of Salisbury

Spend a day among the many vendors, enjoying antique, vintage and modern dolls, OOAK dolls, teddy bears, vintage and modern toys as well as doll clothes, accessories, furniture and more. Plus hourly and half-hourly door prizes and doll restringing on site.

Find out more at www.SoutheasternDollShows.com

Huntersville — During the medieval times, fall was the harvest season celebrated by festivals and fairs. This rings true again as each Carolina Renaissance Festival day is filled with a bounty of attractions appropriate for all age groups. Village purveyors offer an endless feast of bread bowl stews, premium meats on sticks, sweet treats and confections. Costumed performers offering continuous music, dance, comedy, and circus entertainments on 12 stages. Shop an array of craft vendors and enjoy activities for children of all ages that include people-powered amusement rides and countryside faire games.

The 23rd annual Carolina Renaissance Festival., north of Charlotte between Concord and Huntersville, on Hwy 73 at Poplar Tent Road (between I-77 and I-85, for eight consecutive weekends, Saturdays and Sundays, Oct. 1-Nov. 20, 10.m.-5:30 p.m., rain or shine.

Advance discount tickets at Harris Teeter. Tickets at the gate are $1 more, or print your own online at carolina.renfestinfo.com

Mime troupe from Charlotte to perform in East Spencer

EAST SPENCER — The Anointed Mime Ministry of Charlotte, Souls2Christ, will perform at 3 p.m. on Oct. 2 at Shady Grove Baptist Church, 600 S. Long St. This professional mime troupe performs as part of anniversary celebration as Shady Grove celebrates its senior choir’s 94th anniversary. The group was formed in 2009 by Dennisa Herndon. Find more info at www.soulls2christmime.com or 704-310-1768.