Tony-winning musical play takes flight at The Meroney next week 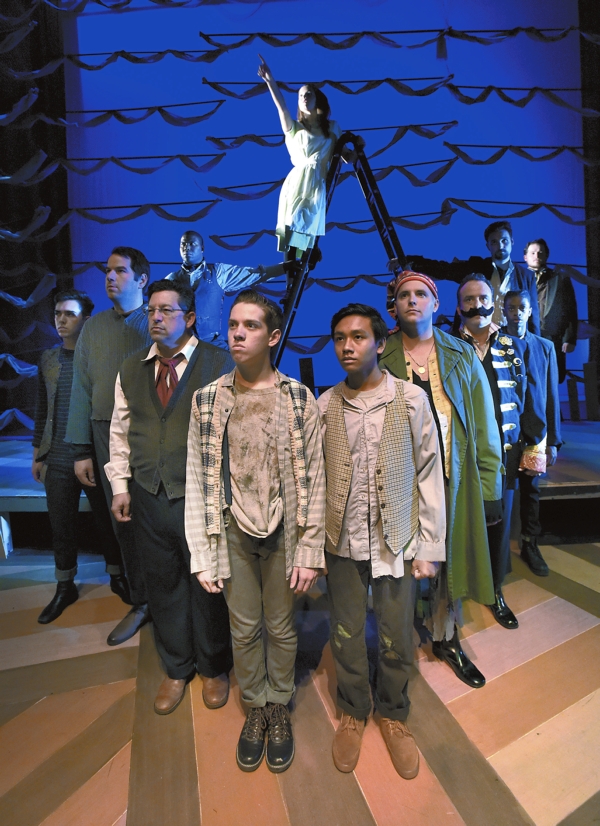 The cast for the play "Peter and the Star Catcher" presented by the Piedmont Players. Photo by Wayne Hinshaw, for the Salisbury Post

Beginning next Thursday night, Piedmont Players Theatre will upend the century-old story of how a miserable orphan comes to be The Boy Who Would Not Grow Up (a.k.a. Peter Pan).

When a young orphan (Joe Cornacchione) and his mates are shipped off from Victorian England to a distant island ruled by an evil king, they know nothing of the mysterious trunk in the captain’s cabin, which contains a precious, otherworldly cargo.  At sea aboard the S.S. Neverland, the boys meet a precocious young girl named Molly (Brooke Baldwin), a Starcatcher-in-training who realizes that the trunk’s precious cargo is starstuff, a celestial substance so powerful that it must never fall into the wrong hands. When the ship is taken over by pirates – led by the clumsily-fearsome Black Stache (Josh Wainright), a villain determined to claim the trunk and its treasure for his own – the journey quickly becomes a thrilling adventure.

The grown up prequel to Peter Pan, Peter and the Starcatcher won 5 Tony Awards (the most of any play of the 2011-2012 season) and was named one of New York Times, New York Magazine and New Yorker’s Top 10 Shows of the Year.  Written by Rick Elice with music by Wayne Barker, the play is based on The New York Times best-selling novel, Peter and the Starcatchers, written by Dave Barry and Ridley Pearson.

Featuring a dozen actors portraying more than 100 unforgettable characters, Peter and the Starcatcher uses ingenious stagecraft and the limitless possibilities of imagination to bring the story to life.  This epic origin story of popular cultures most enduring and beloved character proves that the human imagination is the most captivating place in the world.  A masterful example of storytelling as a lively art, the story is simultaneously being told while being performed, as some cast members take turns narrating, while others instantly assume the shapes and guises being described.

The Meroney stage will be transformed into an ocean voyage, a shipwreck, and even a spooky jungle inhabited by some nutty natives.  From a chorus line of singing mermaids to three orphans with a distrust and resentment of grown-ups, PPT’s hysterical cast of guides will take the audience on an extraordinary journey of marauding pirates, unwilling comrades and unlikely heroes.  PPT’s first production of the new season, Peter and the Starcatcher, will playfully explore the depths of greed and despair… and the bonds of friendship, duty and love.

PETER AND THE STARCATCHER Show Dates: Oct 6-8 & 12-15 at 7:30 and a matinee on Sunday, Oct 9 at 2:30pm.  Tickets are available at the Meroney Box Office by calling 704-633-5471 or online at piedmontplayers.com.  Ticket prices:  Adults $20, Students/Seniors $17. Producing Partners:  Carrol Fisher Construction Company & Crescent Construction Services.