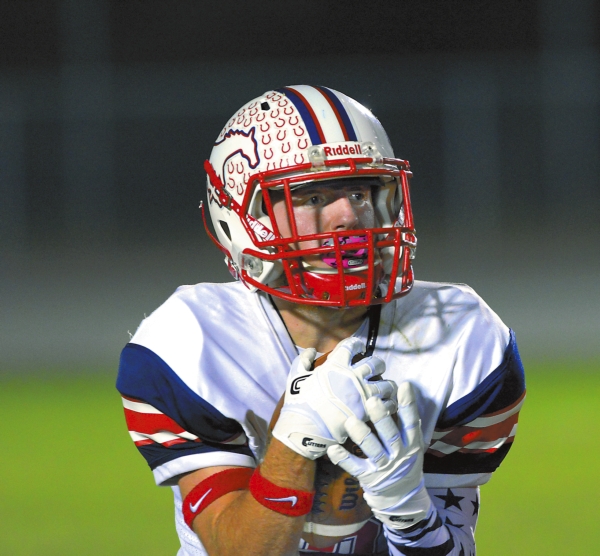 Previews and picks …
Shrine Bowl of the Carolinas rosters for the Dec. 17 game in Spartanburg, S.C. were announced earlier this week, and Rowan County won’t have a representative in the game this year.
Seventeen Rowan players have competed in the best-against-the best contest since 2000 (a few were injury replacements, not actual selections) and Rowan has had at least one athlete in the game in 13 of the previous 18 seasons.
The county experienced major Shrine Bowl glory not long ago. West Rowan’s K.P. Parks (offense) and Chris Smith (defense) were both MVPs when they led North Carolina to a win in 2009.
While no one is headed to the Shrine Bowl this time, there are exceptional seniors in Rowan this season, with North Rowan defensive end Zion Debose, West Rowan receiver Kortez Weeks, East Rowan running back Max Wall, Carson cornerback Brenden Westbrook, West linebacker L.J. Robinson and West cornerback Deyquan Byrd, in no particular order, topping the list as the season reaches the halfway mark.
The Shrine Bowl roster is heavy with big-city players and 4A athletes, and it’s hard to argue with that plan. Powerhouse squads such as Greensboro Dudley and Mallard Creek probably do need to have the maximum of two guys on the team to give North Carolina its best chance to win, and while 44 roster spots sound like a lot, 44 doesn’t stretch as far as you might think.
The two nearby 4A schools — A.L. Brown and Davie County — are very good, with one loss apiece, but they also didn’t have any players selected.
To find a season when there wasn’t a single player chosen from Rowan, Davie or A.L. Brown, you have to go all the way back to 2002.
Actually, only one player was chosen from the 10 teams in the 3A South Piedmont Conference. That was Concord stud Hamsah Nasirildeen, who will play defensive back.
No one was taken from the 2A Central Carolina Conference. There were a handful chosen from the 4A MECKA, including pair of Mallard Creek offensive linemen. The 4A Central Piedmont Conference also will have reasonable representation in the game, so while Davie doesn’t have any Shrine Bowlers, it will have the motivation of playing against several of them in league games.
Moving on to the picks, they were (drum roll, please), 6-0 last Friday to lift the season total to a more respectable 23-8. The picks were lucky partly because Salisbury was unlucky. The Hornets were deemed to be a centimeter or so short on a tying two-point conversion in a 14-12 loss to Surry Central.
Picked to win, West Rowan, North Rowan, A.L. Brown and Davie County rolled. Picked to lose on the road at Robinson, Carson did.
This was a brutal weather week last season, with many matchups being moved up or back. East and Hickory Ridge laughed at the elements and played in a Friday hurricane.

CARSON (3-2, 2-1 SPC) at WEST ROWAN (4-1, 3-0 SPC)
What happened in 2015: They actually played twice. West won at Carson, 28-7, in a fairly routine victory that was made easier for the Falcons by a concussion that sidelined Carson QB Owen White.
The playoff rematch in Mount Ulla, with White directing the Cougars, was anything but routine. West needed a county-record performance by Kacey Otto, who had 337 passing yards and 167 rushing yards, to squeeze out a 28-27 overtime win.
The series: West won the first seven meetings before Carson broke through in 2013 (Joe Pinyan’s first year at the helm) for a 28-21 win at home. West now leads the series, 10-1.
History: West outscored Carson, 116-0, in the first three meetings of the schools, but it’s gotten exciting lately. West won, 43-37 in two overtimes in 2014.
Players to watch: Two of the county’s best athletes, Carson corner Westbrook and West receiver Weeks, will go head-to-head at times.
Notable: Carson will be trying to bounce back from a 39-6 thrashing at Robinson. That’s a team the Falcons manged to beat.
The pick: West 28, Carson 14

HICKORY RIDGE (4-2, 2-2 SPC) at EAST ROWAN (2-3, 1-2 SPC)
What happened in 2015: As mentioned earlier, the teams braved a hurricane to play in Harrisburg. East lost the turnover battle, 5-1, and lost a slippery game, 20-7.
The series: Hickory Ridge leads 6-1 and has won the last six meetings.
History: Hickory Ridge opened in 2007, not far up the road from Central Cabarrus.
The only East win against Hickory Ridge came in 2009. That was a very stout East team, coached by current Catawba offensive line coach Brian Hinson. Preston Troutman, who would star in baseball at Appalachian State, caught two TD passes in that game for the Mustangs.
Players to watch: Max Wall (87 carries, 806 rushing yards) is expected to continue to spark the East offense. Trevor Shue has thrown the ball well for the Ragin’ Bulls, connecting for 672 yards and 10 touchdowns, with only one interception.
Notable: East is coming off an open week and had a disappointing loss to Carson in its last outing. Hickory Ridge has lost to two of the best in the SPC (Robinson and Concord) but is still regarded as one of the league’s top four clubs. East owns a league win against Cox Mill. Hickory Ridge has beaten Cox Mill and Central Cabarrus.
The pick: Hickory Ridge 31, East Rowan 17

SOUTH ROWAN (0-5, 0-3 SPC) at COX MILL (1-4, 1-2 SPC)
What happened in 2015: With starting QB Heath Barringer out, receiver Tyler Rary quarterbacked the Raiders in a 27-10 loss to the Chargers. The game was played on a Thursday.
The series: Cox Mill leads 3-0.
History: Cox Mill opened in 2009. South has come close to beating Cox Mill once. In 2013, the Raiders led in the fourth quarter when a win would’ve prevented a winless season, but QB Hunter Longmire rallied the Chargers to a 45-36 victory. Cox Mill destroyed South, 55-0, in 2014.
Players to watch: South QB Austin Chrismon and RB Sayquan Anthony should have success on the ground against the Chargers. John Brosnahan kicked three field goals for Cox Mill in last week’s 23-7 win against Northwest Cabarrus.
Notable: South is an underdog, but this might be the Raiders’ best remaining chance at a win this season. Cox Mill will be looking to build on its first win of the season against rival Northwest Cabarrus, a team that nipped South Rowan. Cox Mill coach Craig Stewart is a South Rowan graduate.
The pick: Cox Mill 23, South Rowan 14

NORTH ROWAN (4-2, 0-0 CCC) at LEXINGTON (3-2, 0-0 CCC)
What happened in 2015: North Rowan won ugly, 18-13, after the game was postponed nearly a week.
The series: North leads 24-14.
History: The schools didn’t play for the first time until 1977. Lexington won four of the first five meetings, but North Rowan took over the series in the early 1990s and beat the Yellow Jackets 12 straight times. North has won the last three meetings. The schools didn’t meet in 2011-12. Lexington’s most recent win was in 2010.
Players to watch: North DB Chris Clodfelter picked off two passes against Lexington last season. Lexington QB Saafir Craven provides most of the Yellow Jackets’ offense. He’s a good runner and passer.
Notable: Even on the road, North Rowan is favored, but it should be a very good game. Lexington’s two losses have been to 4A power North Davidson and to a 4-1 Randleman club in overtime. North Rowan’s losses also are to good teams — Davie County and South Iredell. The winner becomes the favorite to rule the CCC.
The pick: North Rowan 24, Lexington 21

REAGAN (3-4, 1-1 CPC) at DAVIE COUNTY (5-1, 1-0 CPC)
What happened in 2015: Reagan’s 45-29 win wasn’t as close as it sounds. The Raiders led 42-7 late in the third quarter.
The series: Davie still leads 4-3 but has been smashed in the last three meetings.
History: Reagan has scored 45, 58 and 45 against Davie the last three seasons.
Players to watch: Davie QB Chris Reynolds threw for 305 yards against Reagan in 2015, while Cooper Wall had seven catches for 95 yards. Reagan linebacker Jesiah Carlton is headed for the Shrine Bowl.
Notable: Reagan’s offense isn’t what it has been, and the Raiders were shut out by Mount Tabor in their CPC loss. Davie’s defense is much stronger than it’s been in recent years.
Pick: Davie 31, Reagan 14

CHARLOTTE VANCE (5-0, 0-0 MECKA) at A.L. BROWN (4-1, 1-0 MECKA)
What happened in 2015: Weather postponed the game to Monday, and eventually the team’s played a Vance “home” game at Rocky River High in Mint Hill. The Wonders whipped the Cougars, 31-14.
The series: A.L. Brown leads 2-1.
History: Vance’s Donnovan Spencer shattered records and ran for 405 yards to lead a high-scoring Vance victory when the teams played at A.L. Brown in 2014. The Wonders outscored Vance, 55-40, in a wild first meeting between the schools in 2013.
Players to watch: Vance linebacker Darien Reynolds was a Shrine Bowl pick, and Vance QB Kingsley Ifedi could have been. Junior back Jahia Mahatha has scored eight TDs for the Wonders.
Notable: While it has been an offensive-minded series, to say the least, look for more defense in this one. Defense is the Wonders’ strong suit.
Pick: Vance 27, A.L. Brown 21