Other voices: HB-2 is too hot to handle 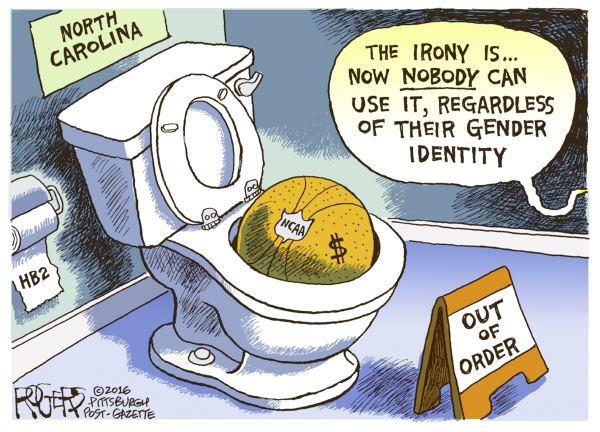 So, what happens next?

When it comes to HB-2, we have two sides that have dug in, refused to budge and are complaining that the other side won’t compromise.

Gov. Pat McCrory and some leaders in the Republican-controlled legislature have said they’ll repeal the “bathroom bill” that’s made North Carolina a target of boycotts across the nation — but only if Charlotte first repeals its non-discrimination ordinance, which inspired HB-2 in the first place.

Charlotte Mayor Jennifer Roberts and her supporters on the City Council aren’t budging. Technically, the ordinance is null and void, since HB-2 overrode it. Also, they regard repeal as, in effect, sanctioning discrimination against gays, lesbians and transgender people. For them, it’s a matter of principle.

So, McCrory declared to the Charlotte Rotary Club — and to anybody else who’ll listen — that it is now All Charlotte’s Fault. Don’t blame him.

In a tight re-election campaign, McCrory apparently figures he cannot back down without losing support of conservatives who consider LGBT civil rights an affront to their religious principles. So, he seems inclined to let the federal courts sort it all out.

It’s intriguing to note that the biggest supporters of the HB-2 “compromise” have been business groups like the state’s Restaurant & Lodging Association and the Charlotte Chamber of Commerce. Their members are feeling the pain first, and hardest, as the NBA, the NCAA and dozens of non-athletic organizations pull their tournaments and conventions out of the state. Losses are so far estimated in the tens of millions.

There might have been grounds for maneuver. Some critics have claimed the Charlotte ordinance was long on ideals, but vague on details. There might have been reasonable grounds to start over and redraft the thing — which is most assuredly what the legislature needs to do with the badly drafted HB-2.

But “reasonable” is not a word in the current political vocabulary. In the current atmosphere, compromise is a synonym for weakness, cowardice and submission. (So much for those craven Founders compromising with each other to draft the Constitution).

The irony, of course — as several folks have pointed out — is that HB-2 is unenforceable. Nobody is going to pay for police to patrol the state’s restrooms for violations, conducting strip searches or whatever, to catch miscreants. It’s mostly a statement of principle — the principle that gays, lesbians and transgenders have no particular rights that North Carolina need respect.

Another irony: Republicans are going to the polls trying to argue that their tax cuts and deregulations of the past four years have jump-started North Carolina’s economy. Yet their principled stand is costing the state untold treasure in lost revenues and the fees from protracted court cases.

But that’s Charlotte’s fault, of course, because they won’t compromise there.

So pass the hot potato and empty your pockets. Looks like it’s going to be a long, cold winter.