‘Mr. Yosef’ is riding into a black-and-gold sunset at ASU 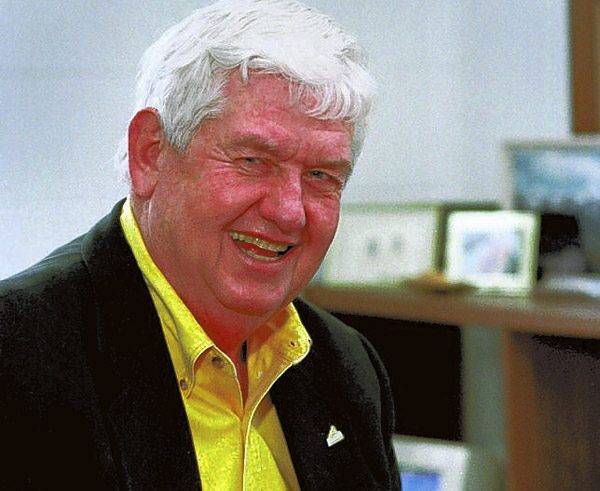 Submitted photo In 2000, Gerald Adams, director of the Yosef Club at Appalachian State University, received the University Advancement Outstanding Performance Award. Adams, 84, grew up in Rowan County and played football his senior year at Boyden High in Salisbury. He will retire Friday from his ASU post and be honored at Saturday's ASU football game against Georgia State.

It’s pretty easy to pick out Gerald Adams on a football Saturday when his beloved Appalachian State University takes the field.

He wears a yellow-gold jacket, black shirt and pants, a black-and-gold tie and black-and-gold shoes. A good crop of white hair gives a distinguished look to this man alumni know as “Mr. Yosef.”

The seven rings on his fingers also betray his enthusiasm for ASU football. They represent accomplishments such as NCAA Division I-AA  national championships, the historic ASU win over the University of Michigan in 2007,  a bowl game victory, a Southern Conference title and his wedding ring.

Julia Adams — a.k.a. Mrs. Yosef — is always decked out in black and gold herself.

“My wife says if it’s not black and gold, we don’t have it,” Gerald says of their wardrobes.

On the field Saturday in Boone, as ASU takes on Georgia State, the school will take time to recognize the 84-year-old Gerald Adams, who officially retires Friday as director of the Yosef Club after 25 years.

Over that quarter century, when most men his age would have been enjoying a well-deserved retirement after 37 years in public schools, Adams raised more than $33 million for the Yosef Club, the fundraising arm for ASU sports.

Most of those contributions went toward  scholarships for student-athletes.

Adams took the director’s job in 1991. The year before, the Yosef Club had raised $363,475 for ASU sports. In each of the past three years, the club has brought in $3 million.

Adams will be the first to tell you things got a lot easier in his arm-twisting business after ASU stunned the collegiate football world by beating Michigan 34-32 in the “Big House” and that not-so-long-ago run of three national championships in what is today known as the Division I-FCS (Football Championship Series).

“If you believe in what you’re selling, it’s not a problem,” Adams says.

The office staff and friends gave him a little reception Tuesday afternoon, and Adams said he couldn’t help it, but he still found himself handing brochures to a couple of people as they were going out the door.

“I just enjoy it,” he says of constantly promoting ASU and trying to make it better. “You get to see people.”

If you were wondering, yes, Gerald Adams attended Appalachian State when it was still a teacher’s college. He played ASU football — and actually came close to losing his life from a football injury. He graduated from the school as a physical education and history major in 1954 and went on to earn his master’s degree from ASU in 1962.

Adams reconnected with Julia, his second wife, at a Black-and-Gold Alumni Dance in 1993. She had been a cheerleader when they were both in school. Gerald asked her to dance that night.

“We’ve been dancing ever since,” Gerald says.

In his day, Adams played for Coach E.C. Duggins, a man he says was mean as a snake. The guys on those teams came to call themselves the “Duggins Boys.” Leave it to Adams, but when he took over as director of the Yosef Club, he persuaded 26 of the Duggins Boys to endow athletic scholarships.

The surviving Duggins Boys still get together at least once a year, and many are expected at a party for Adams Friday night.

Gerald Adams and his siblings — Rosalie Adams of Salisbury and Perry Adams of Faith — grew up near Granite Quarry. Their father, T.C. Adams, worked as a mechanic at Foil Motor Co. in Salisbury, and their mother, Ruby, owned a glass shop in Kannapolis.

The family attended St. John’s Lutheran Church. Gerald laughs today, remembering how his family sat in the pews only a row or two behind the Ketner and Peeler families, which were connected with the Ketner Food Stores and Cheerwine, respectively.

“Here we were,” Gerald says, “my daddy at that time was probably making $13 a week.”

Gerald vividly recalls the St. John’s Lutheran pastor, Dr. P.D. Brown, routinely raising his arms toward the heavens and punctuating his message by declaring, “Glory be to God on high.”

As a teen, Adams and some of his friends would make a little spending money by cleaning out the dressing rooms and grounds at Peeler’s Lake (Granite Lake). They would take a tent there, sleep overnight and get up early in the morning and start cleaning the whole facility.

By 11 a.m., they were ready for breakfast at somebody’s house. In the afternoon, they would swim at the lake before traveling into Salisbury to catch that night’s Salisbury Pirates game at Newman Park.

Adams’ football career started in the middle of his junior year at Granite Quarry High School when he transferred to Salisbury’s Boyden High. Granite Quarry didn’t have a football team, and if Adams wanted to play, he would have to pay for the transfer to Boyden.

Adams was able to participate in Boyden Coach Bill Ludwig’s spring practices in 1949, and that fall, as a senior, he played tackle on a solid high school club with star players such as Jerry Barger, Bob Ritchie, Don Goodwin, Bob Gardner, Bill Peeler, Jerry Kincaid and Rodney Calloway.

Barger would go on to star at Duke University, while several of the others had good football careers  at Catawba College. Ludwig’s talented coaching staff included Joe Ferebee, Derwood Huneycutt and M.L. Barnes.

It was a conversation with Coach Barnes that led Adams on his fateful journey to Appalachian State. Noting Adams didn’t possess a lot of speed, Barnes told him he might want to consider ASU because that team was running a T-formation on offense (as opposed to a single wing).

At Appalachian, Adams walked on in 1950 and made the jayvee squad as a defensive tackle. He was sixth on the varsity depth chart at his position going into his sophomore year, but the fighting in Korea had broken out, stealing many of the Appalachian football players.

By the second game of his sophomore season, a win against Western Carolina, Adams was a starting offensive tackle who grabbed some ink by blocking a point-after-touchdown and recovering an onside kick.

Later that year, he made national news when he was seriously injured in a game in Tampa, Fla. During another onside kick, Adams fell on the ball moments before a Tampa player came running in and jumped on top of him.

The force of that blow landed Adams in the hospital where he bled internally for five days and ended up losing part of a kidney.

Adams’ football career would prove to be snakebitten. He broke an ankle in his junior year and eventually stayed on with the team as a manager, learning as much football as he could.

He became coach of a six-man football team at the Patterson School for Boys, located between Boone and Lenoir. That experience and becoming the first resident manager of Justice Hall at ASU served him well in landing a job in the Pittsylvania County Schools in Virginia.

Thus began his long career as a teacher, coach, principal and assistant superintendent of schools in Pittsylvania County. There was an interruption in 1956-58, when he served a two-year stint in the Army.

Adams was in radio school at Fort Meade for a while, before the Army sent him to personnel school at Fort Dix. That training came in handy because for the last 20 years in Virginia public schools, Adams handled a lot of personnel matters, including the hiring of teachers.

One of his first hires as a principal, after coaching for several seasons, was Rowan County’s W.A. Cline, who also was a graduate of ASU. Cline coached Adams’ former team before heading back to Rowan, where he would guide East Rowan High to a perfect season in 1969.

Earning his master’s degree  at Appalachian wasn’t the easiest of times for Adams. He was coaching football then, so he might get back from a far-off Friday night high school game as late as 1 a.m., then be on the road to ASU by 5 a.m. Saturday so he could be ready for class at 8.

He usually made that trip with George Beasley. One Saturday, Beasley told Adams he couldn’t make the trip to ASU because he had a business matter to take care of.

Beasley planned to invest $1,000 in a radio station, WPYB, and he encouraged Adams to do the same. The price was too steep for Adams and his young family. Adams declined the offer, and it became one of those if-only-I-had-known stories for Adams to tell today.

Adams met his first wife, Barbara, in Virginia and they raised three children before she died of cancer. Those children are incredibly successful today.

Ann is the dean of education at Elon University; Robert is program director of  the University of North Carolina at Chapel  Hill’s Department of Radiation Oncology, and Richard is a musician and professor in Virginia.

After that dance with Julia in 1993, the couple started a long-distance courtship. She was the supervisor of health education in Duval County in Florida. They eventually married in 1996. Doing the honors was the Rev. Dr. Timothy Smith, then pastor of Grace Lutheran in Boone and now the bishop of the N.C. Lutheran Synod.

Smith also grew up in the St. John’s Lutheran congregation in Salisbury.

As is the norm with couples who are planning to marry, Smith had a counseling session with Gerald and Julia.

“We talked about 5 minutes, and he said, ‘I think y’all know what you’re doing,'” Adams recalls.

Gerald and Julia plan to keep going to every football game — home and away — as they have done since getting married. Gerald often asks ASU alumni looking at all the rings on his fingers which one they think is the most important.

It’s interesting, he says, that seven out of 10 women point to his wedding ring first.

He can’t argue with that.

Looking back — and he has been doing a lot of that lately — Gerald says he enjoyed his first four years at Appalachian as a young man, as well as his last 25 years at ASU as a not-so-young man.

“It has been a great experience for me, he says. “this has been all good.”