Fernandez: A Miami tragedy that should never have happened 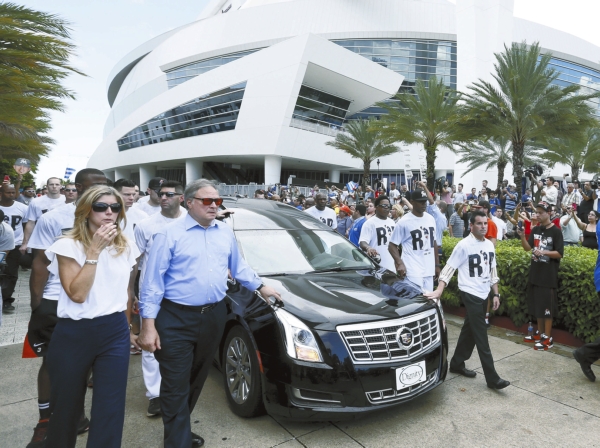 AP Photo/Wilfredo Lee ... Miami Marlins owner and CEO Jeffrey Loria and his wife Julie walk with players and staff as they escort a hearse carrying the body of Marlins pitcher Jose Fernandez as it leaves Marlins Park stadium, Wednesday, in Miami. Fernandez was killed in a weekend boat crash along with two friends.

MIAMI (TNS) — You heard the news, breaking like a community’s heart. Then you saw the awful photo of the capsized boat on that jetty, its hull shattered. You watched as Miami Marlins players all wore jersey No. 16 in honor of their beloved teammate. You see the poignant memorial outside the ballpark — the loving, agonizing sprawl of flowers, stuffed animals, balloons, candles and hand-drawn messages.

But then you see this, and the brutal finality of it hits home, jarring the senses all over again. You see the black hearse and, visible behind its glass, a polished brown casket.

He’s gone. He really is.

On Wednesday afternoon, three days after South Florida awoke to the shock of the tragedy, Jose Fernandez’s Marlins teammates surrounded the hearse as the motorcade paused just outside Marlins Park. All wore white shirts with R.I.P. on the front, a photo of Fernandez tall on a pitcher’s mound representing the I.

They leaned in toward where Fernandez’s body lay in repose as some 3,000 Marlins fans stood along two blocks of the motorcade route, many wearing his jersey, many weeping.

The procession slowly began to move, the players walking along both sides of the hearse like pallbearers, touching the vehicle that would transport Fernandez’s body first to a Catholic blessing, then to a public church viewing, prior to a private funeral on Thursday at which teammates Marcell Ozuna and Martin Prado will speak for the team.

Marlins owner Jeffrey Loria stood near the front of the hearse, touching its hood. Star outfielder Giancarlo Stanton walked behind the car, his hand on its rear window.

Fans, wanting to do just right but not sure what that was, broke into reverent applause as the hearse passed. Some chanted “Jose” over and over. A woman was heard, her wailing sob beyond her control.

He’s gone. That terrible boat accident that also took the lives of friends Eduardo Rivero and Emilio Macias really happened, and the brightest light of Cuban Miami and Marlins fans has disappeared.

Jose lives on in spirit and memories, of course. And the religious surely are comforted by their belief and trust in that better place. Consolation is for later, though. The grief is too raw.

As the motorcade left Little Havana, Marlins players walked into their ballpark to try to get ready for the night’s game, their last of the season at home. You are watching through tears as your friend’s casket is being driven away, and a few hours later an umpire is shouting “Play ball!”

Many fans trotted after the departing hearse for a final look. The stadium’s large outdoor video screen played a tribute to Fernandez. Across loudspeakers played the mournful Spanish ballad “Yo te extranare” (I will miss you).

The hearse traveled to Coconut Grove and La Ermita de la Caridad (Shrine of Our Lady of Charity), where another crowd of mourners had gathered and where a priest, the Rev. Juan Rumin Dominguez, blessed the body of Fernandez. The procession was met by a church choir.

As the hearse’s rear door was opened for the blessing, loved ones including Jose’s mother, grandmother and pregnant girlfriend surrounded the casket. Fernandez’s mother and abuela, both weeping, leaned into the car and placed on the casket Jose’s 2016 All-Star Game jersey and an orange Fernandez Marlins T-shirt.

Later that evening the casket lay at St. Brendan Catholic Church in Miami for a six-hour public viewing that drew an emotional, continuing pilgrimage of thousands — the casket closed because of the nature of the injuries sustained in the accident, according to a source.

Inside that casket topped by red roses and surrounded by photographs lay a baseball superstar but not a saint. Fernandez was a nearly perfect pitcher but imperfect as all of we human beings are, maybe all the more so when we are only 24 years old.

So the news and speculation of what happened that night in the boat comes out by degrees, because in the social-media age there are no secrets kept.

Jose owned the boat, though whether he was driving is not yet known. But he had been drinking earlier that night at a bar/restaurant on Miami River. Fernandez had reportedly been stressed, perhaps after a fight with his girlfriend, and wanted to blow off steam. Police say the 32-foot boat hit those rocks at a high rate of speed.

The tragedy might yet have an ugly side depending on what the toxicology reports show and if the investigation determines who was driving. Wrongful-death lawsuits could be in store, and Marlins fans might be left not only to mourn the loss of Fernandez, but also to lament — as the rawest grief gradually fades — that this tragedy should never have happened.

But that’s enough harsh reality for the day they are burying this young man. Let what’s ahead play itself out.

On Wednesday, all that mattered was that Marlins players were surrounding a hearse carrying a casket, and Miami wept as that worst finality of it sunk in hard:

He’s gone. He really is.

Greg Cote is a columnist for the Miami Herald