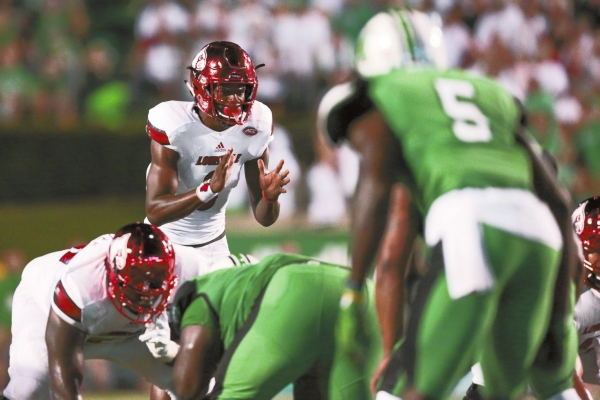 McCloud knows the maddeningly calm and careful Watson will be primed to show the Cardinals and Heisman Trophy front-runner Lamar Jackson who is truly on top of the Atlantic Coast Conference.

Louisville (4-0, 2-0), behind Jackson’s dynamic play, has been the surprise of college football. The Cardinals made believers of many two weeks ago with a 63-20 demolition of highly ranked Florida State, a game in which Jackson accounted for five touchdowns.

Last week, Jackson had 479 yards of offense and seven touchdowns in a 59-28 victory over Marshall last Saturday to set up the ACC Atlantic’s undefeated showcase .

Those are similar to the eye-popping numbers Watson amassed much of last season in leading Clemson to the ACC championship and a spot in the national title game.

Watson hasn’t put up big numbers so far but in a 26-7 win at Georgia Tech last week he threw for 304 yards — his first time this season surpassing 300 yards — with two touchdowns as the Tigers built a 23-0 halftime lead in their league opener.

It was a positive step, Watson felt, although still not where he and Clemson’s offense hopes to be by season’s end.

“We’re going to focus on what we’ve got to do at Clemson,” Watson said Monday. “We can’t focus on Louisville or Lamar Jackson. We’ve got to do what we do.”

In a head-to-head matchup, though, give Watson the check mark for big-game experience.

Watson nearly stole the show in a 45-40 loss to national champion Alabama last January with 478 yards of offense and four TD passes.

“If you play this game, all the great ones love the great competition of going against the best,” Watson said.

Still, Watson said he won’t let himself get caught up in a Lamar-vs.-Deshaun mentality. The Heisman Trophy belonged to LSU runner Leonard Fournette this time a year ago before eventually going to Alabama’s Derrick Henry, Watson recalled.

“I just do what I do to win,” he said. “I can’t control what people thing about the Heisman (race). That’s out of my league.”

“I think we’re excited for it,” he said. “We feel like it’s a great opportunity for us. Our guys have worked extremely hard for it, put a lot of effort and dedication into getting here. Let’s go play it.”

Watson’s had his issues with Louisville’s defense in his two previous meetings. In 2014, Watson cracked a finger on a helmet in the first quarter and missed the rest of Clemson’s 23-17 win. Watson was healthy, but off target at Louisville last season as Clemson held on for a 20-17 victory. He finished with 199 yards passing and two touchdowns, but threw two interceptions and struggled to consistently move the offense.

Watson said that game was a building block toward bigger things later on — something he believes is also happening this season as Clemson’s attack continues its slow burn to success.

“We’re still having the same energy that we had before, preparing at the same high level,” Watson said. “We just want to be 1-0 this week and move on from there.”