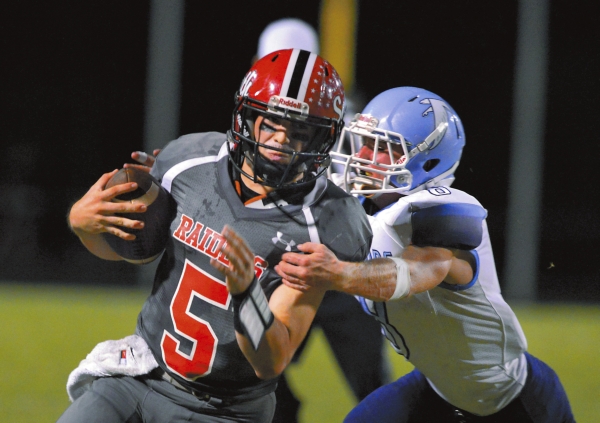 Prep football notebook …
North Rowan’s Gray twins, Deandre and Desmond, had huge games in Friday’s 32-7 win against West Stokes.
The Grays combined for 13 receptions for 150 yards.
Deandre was injured in the East Rowan game when he took a hit on the kneecap and missed three games, but he asserted himself on Friday with two TD catches.
Desmond has been consistent all year.
The play of the Grays was vital with big receiver Alonzo Sirleaf sidelined by illness. Coach Ben Hampton expects to have Sirleaf back for Friday’s CCC opener at Lexington.
•••
North and Lexington are opening CCC play a week earlier than the rest of the league. Hampton explained that’s because Lexington, which is only playing 10 games, was off last week and didn’t want to have two open weeks in a row.
•••
Hampton had praise for sophomore linebacker Nautica Patterson, who had double-digit tackles against West Stokes.
Zion DeBose had a fumble return TD that put North (4-2) up by two scores and forced ground-oriented West Stokes to put the ball in the air.
“That was the gameplan — stuff the run and make them resort to the pass,” Hampton said. “Our defense got back on track after a rough game in the loss to South Iredell. We just weren’t ready to play against South Iredell.”
•••
Nose guard Steven Thurston had another good game and Hampton also praised his work at left guard. He played about half the offensive snaps in addition to his defensive work.
•••
Corbin Smith threw for a career-best 191 yards. He notched his eighth and ninth TD passes of the season and leads the county in that department.
“He did a good job of spreading the ball out to a lot of different receivers,” Hampton said.
•••
Center Will Anthony earned praise from Hampton for his best game. He had five pancake blocks.
•••
North is getting healthier. Standout linebacker Javin Goodine will be back for the Lexington game. DB Josh Ellis probably will miss one more week.
“We’re not deep,” Hampton said. “But right now we’re about as healthy as we’ve been.”

West Rowan
The Falcons are battling injuries, with running back Martavio Rankin, safety Malcolm Ingram, offensive tackle Avery Allen and linebacker Miles Poteat missing action.
Ingram’s status is uncertain, but Rankin, Allen and Poteat are expected back soon.
•••
Taking Poteat’s place in Friday’s 35-0 win against South Rowan was Daniel Durham, and Durham responded with a productive game. He was in on several tackles for loss and had a sack.
•••
Cornerback Deyquan Byrd took over the county interception lead by getting his fourth against the Raiders. He almost scored on the play, but the ball was spotted at the South 2-yard line.
Byrd is probably learning some things from West DBs coach Justin Avery. Avery, who had 17 career picks, shares the school record for interceptions in a single season (10) with Zeb Link.
•••
West head coach Joe Nixon said other Falcons who stood out in the South game were center Dawson Sheesley, left guard Javon Lofton, quarterback Payne Stolsworth, receiver Kortez Weeks and linebacker L.J. Robinson.
•••
Robinson took one of the hardest licks of the night from South’s Andrew Byrd after Robinson intercepted a pass.
Robinson bounced up and patted his tackler on the helmet.
Robinson gave credit for his second interception of the season to West’s pass rush.
“They didn’t really give the quarterback any time to throw and he didn’t have anywhere to go with it,” Robinson said. “I jumped up and caught it.”

Salisbury
The Hornets (1-5) suffered a frustrating, 14-12 loss at Surry Central.
“We had more of everything than they did,” Salisbury coach Ryan Crowder said. “More rushing yards, more passing yards, more first downs.”
Trell Baker had two big-play TDs, but the Hornets couldn’t overcome seven turnovers.
•••
Playing well for Salisbury on defense were linebacker Tywun Rivens, cornerback Tyvion Wood, linebacker Tevin Mullinax and “Hornet” Nick Austin, a running back who is now playing mostly on defense.
“Hornet” JaQuan Davis made the biggest defensive play for the Hornets, ripping the ball out of the hands of a Surry Central ballcarrier at the Salisbury 5-yard line and taking the ball to the 25. Baker got one of his touchdowns on the next play.
“That was like a 14-point swing for us in a span of two plays,” Crowder said.
•••
PATS were the difference in the game.
A Salisbury kick failed after the Hornets’ first touchdown. That put the Hornets in the position of having to go for two after their second one.
On the conversion attempt, Griffin Myers tossed a pass to Rivens, who was ruled to have been tackled short of the goal line.
“Extra points are from the 3, and I guess we got 2.9999 yards on that play,” Crowder said. “It was really close. I don’t know he we didn’t get in. The play we ran was a 4-yard route.”

South Rowan
Offensive Player of the Week Sayquan Anthony ran the ball fearlessly for 72 yards on 19 carries in a 35-0 loss to West Rowan.
“He not only ran it hard, he made some heads-up plays,” South coach Daniel Yow said.
One of those heads-up plays came on an “iso.” Anthony got stuffed at the line, but as he was tackled, he tossed the ball back to QB Austin Chrismon, who turned it into a positive play by running for a first down.
Anthony went down twice in the game with cramps.
“It was humid, and he was playing both ways,” Yow said. “He got all the action he could handle.”
•••
South (0-5, 0-3 SPC) held its own in the running game on both sides of the ball against West, and the Raiders accumulated more first downs.
“That was encouraging to see, especially against a team as good as West Rowan,” Yow said. “We lost the passing game by a lot, but I felt like we won the running game.”
•••
Lineman Michael Gilbert was outstanding on defense for South. He was credited with nine solo tackles and also had five assists. He was South’s Defensive Player of the Week.

Carson
Carson (3-2, 2-1 SPC) was crunched by Robinson, 39-6, last week and will look to bounce back Friday at West Rowan.
Carson’s playoff loss at West Rowan last year was the most memorable game of the 2015 season.
•••
Cornerback D.J. Fulcher and punter/kicker Cole Howard missed the Robinson game with injuries, and Howard may miss the rest of the season with an ankle injury.
•••
A bright spot for the Cougars was their first TD pass of the season — Owen White to James Kotcamp.
•••
Isaac Bell had another strong game at linebacker and long snapper. He made 10 tackles, with two for loss. Coach Joe Pinyan said spur Cameron Rayfield also played well on defense.
•••
Nose tackle Josh Malloy came up with his second fumble recovery of the season for the Cougars.

East Rowan
After an open week, the Mustangs (2-3, 1-2) return to action Friday with a home game against Hickory Ridge.
East played a memorable game at Hickory Ridge last season, losing in hurricane conditions — lots of wind, rain and mud. East lost five turnovers in that one.
Greg Waslo, who quarterbacked Hickory Ridge to that victory, is now a Catawba Indian.

Davie
Davie welcomed back quarterback Chris Reynolds and receiver Cooper Wall from injuries, and those two got a 54-7 thrashing of R.J. Reynolds started by connecting for two early touchdowns.
In his four games, Reynolds has completed 56.3 percent of his passes for 197.5 yards per game. Wall has 22 catches and 351 yards in four games.
•••
Davie’s senior kicker Jared Griggs has been accurate. He’s 7-for-8 on field goals, with a long of 48. He’s 17-for-19 on PATs.
•••
Davie (5-1, 1-0 CPC) will be favored at home this week against Reagan and is regarded as one of the favorites in the CPC.
Davie got votes in the AP poll this week and it makes sense. Davie beat Page, which beat highly ranked East Forsyth. Davie’s loss was to top-ranked Dudley.

A.L. Brown
Lewis Harris had his second and third touchdown catches of the season, and the senior receiver was named Offensive player of the Week for the 35-12 win against North Meck.
Ten different Wonders have caught a pass, but Harris leads the receiving committee with 11 catches and 227 yards.
•••
The Wonders’ entire defensive line was recognized as “Defensive Player of the Week.” North Meck’s Emanuel Wilson had rushed for nearly 700 yards in the previous three games, but the Wonders limited him to 76 yards on 23 carries.
The Wonders also piled up nine sacks in the game.
•••
Linebacker Tyrece Edwards was named Special Teams Player of the Week, while cornerback Malik Keller earned “Hit Man” honors. Offensive lineman Jeremy Davis was recognized as “Hawg of the Week.”
•••
The Wonders (4-1, 1-0 MECKA) host undefeated Vance on Friday. The Wonders had a breakthrough win against Vance last season.